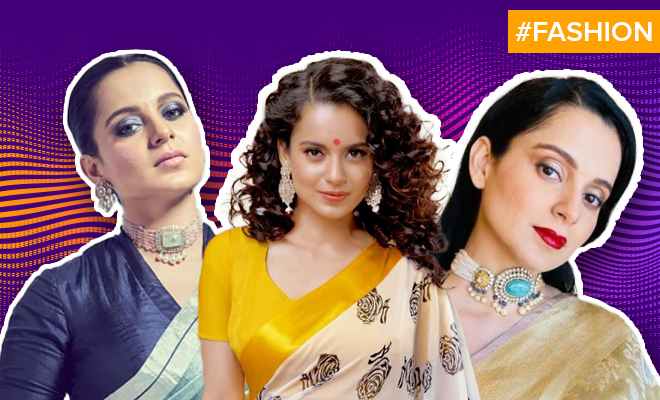 Kangana Ranaut’s Saree Love Is More Than Just A Fashion Choice. It’s Her Way Of Making A Power Statement

Kangana Ranaut never shies away from making a statement, be it with her words or her outfits. I don’t think I’ve come across a woman quite like her in my entire life. She is fearless, gutsy and unapolgetically herself. Yes, she does get carried away sometimes, like this whole circus of nepotism debate and naming and shaming almost everyone in Bollywood, but you can’t deny that the woman has spine and can take down the whole film fraternity, if it comes to it.

She is someone who commands respect and that reflects in her power dressing. Unless you’ve been living under the rock, you’d know Kangana has not held back from pointing fingers at the Bollywood biggies (movie mafia, as she likes to call them) and voicing out her opinions regarding Sushant Singh Rajput’s case. She even made startling revelations about the drug use in the industry which raised eyebrows. She soon started receiving death threats from the Shiv Sena Leader because apparently that’s the most convenient way to tell a woman to back off. Kangana being Kangana asked for police security and rightfully so was given Y-plus category security cover from her home town in Himachal Pradesh to Mumbai.

Guarded by 11 CRPF personnel, Kangana went in and out of the airports and landed in Mumbai on Wednesday, like a queen. However, it was her choice of outfit that caught her eye. She was wearing an off-white saree neatly draped that screamed power and confidence. I am not saying she wouldn’t have looked this powerful and confident woman that she is if she hadn’t worn a saree, but it sure makes a power statement and shows she’s not someone you mess with.

How I see it her saree and the whole look really evokes competence and confidence and challenges the powers that be. Also, this isn’t even the first episode of Kangana Vs Shiv Sena. Last year, she got a threat upon the release date of her film Manikarnika as it was clashing with Thackerey, a film by Shiv Sena but Kangana didn’t budge and released the film on the scheduled day. She is a boss lady in a saree. We love!

I know what you are thinking. Kangana is always spotted in saree and ethnic pieces especially for her airport looks and that’s true. She clearly has an undying love for Indian wear. However, if you’ve been a fashion hawk and observed her clothing, you’d know that those are mostly flirty, flowy Indo-western dresses or vibrant floral sarees which are more relaxed and casual. See for yourself.

In fact, the blouses she sports with her sarees are often sleeveless (exhibits below) and her hair is casually thrown back. Not so much when she came to Mumbai yesterday. Her blouse was fitted and the neckline high. Her hair was tied up in a bun and anyone will tell you that’s when a woman is serious.

So, you see how fashion is more than just clothes but actually an expression that reflects your moods? There’s no denying that fashion has been used as an expression to make a powerful statement or assert thoughts and opinions out in the world. Be it you wearing the pride colours to show your support for the LGBTQ+ community or Rhea Chakraborty wearing a ‘Smash the Patriarchy’ T-shirt in her NCB probe, fashion always speaks louder than words.

Here, with her white immaculate saree, Kangana makes a serious statement about not giving in to political pressure and establishes her authority in her own unique way. She makes a humble nine-yard fabric look so professional and powerful and she does it so effortlessly. In the era of pantsuits and pencil skirts, Kangana Ranaut makes a saree an impactful power dressing piece and the most powerful fashion item there is for Indian women. Saree, not sorry!

Also Read: Kangana. Political Spat. Demolition. BMC. And A Pandemic. If You Aren’t Able To Keep Track Of What Happened, Here’s A Timeline