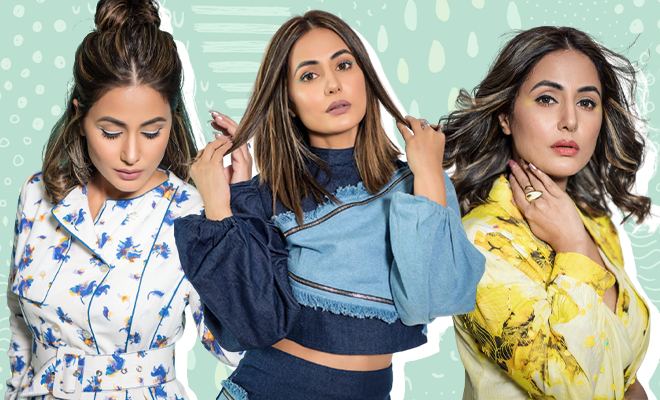 Hina Khan’s Fashion Might Be A Bit Extra For The Bigg Boss 14 House, But Her Eye Makeup Is On Point

Love it or hate it, but you can’t run away from the Bigg Boss goss that goes around this time every year. Even if you don’t follow the show and have absolutely no idea who hit whom with a fry pan or who climbed the walls of BB house because they were not being called to the confession room or who Hina Khan is, you’d always know what’s happening from some source or other (mainly, memes and your office squad). This year, I pledged to not fall victim to the Bigg Boss curse and spend my week better than watching ridiculous fights and addictively toxic speeches by Selmon Bhai every weekend but I’d like to tell you that I have already give in.

This season has its own charms (read weirdness). This time there are three ex-contestants of the house Sidharth Shukla, Hina Khan and Gauahar Khan playing “seniors” to the freshers (new contestants), but we are not going to talk about that here. We are here to talk about Hina Khan’s fashion and beauty looks she’s been sporting in the show, because they are something. In Season 11, all the contestants, Hina stood out not only for voicing her opinions but also for her not-so-regular fashion statements. She was spotted in casual and chic styles in the week and high-on-glam on the forever-anticipated Weekend ka Vaar episodes. While that time, she and her stylist did a pretty good job and gave fashion goals to all of us, her wardrobe for the latest season is a bit too much. In other words, it fails to impress her.

We are not a fan of Hina’s fashion diaries at the BB House per se this time. Most of the outfits are impractical for the house arrest and don’t seem comfy or classy. I mean, why was she wearing an embellished saree on a regular day during a task is beyond me. Yes, you don’t have to look like you just rolled out of the bed like Sidharth Shukla every day, but maybe calm down on the red-carpet glam?

We’ll admit this though; her makeup is refreshing and experimental and we are practically in love. Points to her makeup artist! Plus, since we are specifically looking for great eye makeup in the era of face masks, her looks are just the inspiration we needed.

Here are all the eye makeup looks Hina Khan sported that caught our (and probably Bigg Boss’s) eye.

One of the very first looks Hina rocked on the show was this black and white floral skirt and crop top set paired with a white jacket. While there’s nothing noteworthy in the outfit, the double liner look is certainly taking the attention away from the boring sartorial choice. She wore a black wing encapsulated with a neon green wing and a white smudged shadow on her lower lid. The pop of bright neon makes the look electric and saved the day for Hina, fashionably speaking.

Her denim co-ords were a hard disappointment for so many reasons. Statement sleeves, two shade denims, fringe and zip details —there’s too much happening on this outfit and still I have nothing good to say about either. Secondly, with so many denim styles out there, she could have done better. Her eye makeup looks bomb though. That aqua blue liner drawn on half lid culminating in a curvy wing and fuller lashes are totally stealing the show.

Hina wore a yellow printed suit that was a bad fit for her to say the least. And, by bad fit, I don’t just mean for the BB house but it didn’t really do justice to her killer body and the whole look kinda looks shabby, not smart. I wouldn’t call it a fashion fail but a fit fail, maybe. Again, we loved the eye makeup. A stroke of yellow brushed on the temple and teamed with black liner is what Hina chose. This is the coolest makeup look spotted on Hina on the show.

It’s not her floral trench dress but also the white boots she wore that’s putting us off. Don’t get us wrong, we love a trench dress and there are so many ways to do the look but this is not it. Take notes on the eye makeup though. The icy blue liner and gravity defying lashes is a jazzy look that sort of balance things out for her.

Hina Khan has become quite a fashionista in the telly world lately. We are just wondering why is she not bring her A-game this time? Well, the show has just begun and has a long course ahead of it, which means Hina has ample time to step up her fashion game and get some brownie points for her style like she did before. Here’s hoping! Her eye makeup looks are possibly the best thing to take from the show.

BTW, which of the makeup looks are you going to try?

Also Read: The Next Episode Of Bigg Boss Has Female Contestants Seducing Siddharth Shukla For A Task. Wow, This Is A New Low