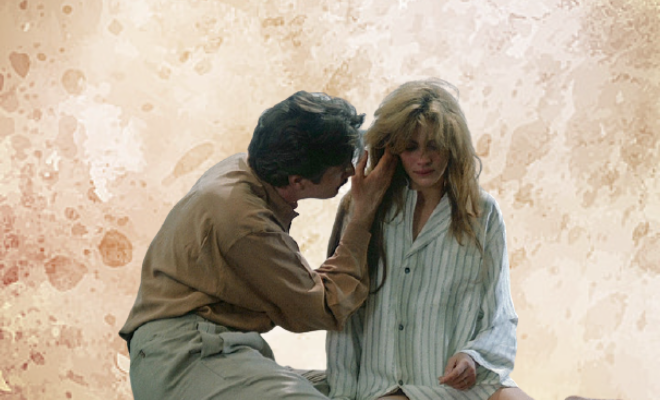 63% Men Believe It’s Okay To Beat Their Wives Up If Refused Sex. This Rot Runs Deep

When I watched Lipstick Under My Burkha, I found Konkona Sen’s story the most disturbing. Marital rape and multiple abortions were a way of life for her and it was sickening to watch. It made my blood boil to see a man behaving like owns a woman and has every right over her body. And yet, that is the reality of so many women. In Parched, Radhika Apte’s story again was so disturbing. It was so liberating to see her embracing her desires and experiencing sex that focusses on her pleasure too. We can’t deny though that men think it’s okay to beat their wives up if refused sex.

It is the sheer sense of entitlement and the lowest form of misogyny that makes men treat their wives like legal slaves. In fact, In GoT, the slaves were treated better and with more respect. Men have grown up to believe their wives must obey and any sort of rejection makes them feel entitled enough to punish them. Acid attacks, marital rapes, and domestic violence – women’s reality is filled with darkness and threats.

And yet, we fail to correctly estimate the severity of the situation until someone throws the horrifying numbers at our face. Recently, a study conducted nationwide in Bangladesh shocked and disgusted me. It is titled ‘Male Youth and Their Sexual and Reproductive Health and Rights (SRHR) in Bangladesh: a Mixed-Methods Nationwide Study’ and conducted by James P Grant School of Public Health of Brac University, funded by The Netherlands Embassy in Bangladesh.

Trigger Warning: This post talks about sexual abuse.⁣ ⁣ Marital rape is a very real thing and happens WAY more often than is talked about. ⁣ ⁣ Sexual assault, sexual coercion, sexual bullying, and consent issues do not magically disappear after you say “I do.”⁣ ⁣ Getting married is not a blanket statement of sexual consent. You do not give away your choices by taking on a spouse.⁣ I love what @taylortomlinson says about it: “Consent is a noise SHE makes, not a feeling YOU feel.” ⁣ You may be stuck at home with your partner due to social distancing, but that doesn’t mean you have to do things you don’t want to do. Your body belongs to you. ⁣ ⁣ #metoo #metoomovement #consent #consentculture #rapevictim #rapesurvivor #rapeculture #maritalrape #intimatepartnerviolence #domesticviolence #abusiverelationship #abusiverelationships #abusive #proverbs31woman #narcabuse #emotionalabuse #abusedwomen #abuserecovery #abuseawareness #churchtoo #trauma #traumahealing #traumainformed #traumabonding #traumasurvivor #traumatherapy #cptsd #covertnarcissist #covertnarcissism #gaslighting

According to their research, a whopping 62 percent of men said “there are times when wives deserve to be beaten.” And 63 % of men said “wives can be hit if they deny to have sex with their husbands”

The study had 11, 102 male participants between the ages of 15 and 24. The participants were picked by systematic random sampling in 64 districts from both urban and rural areas. “The research found that only 6% males consulted healthcare professionals at least once while most could not out of shyness and embarrassment. Informal health care providers like Kabiraj, homeopathy doctors, and local pharmacists (with or without degrees) are the most reported first points of contact for sexual and reproductive health (SRH) problems, such as erectile dysfunctions, wet dreams, or genital ulcers,” reports Dhaka Tribune.

This Dussehra let’s talk about the less talked about evils of our society! 💍💍💍 I woke up one morning, Trying to forget what happened But the mirror had other plans Picking up my sari, I wore it quivering I then tried to pull my hair back When unable to tie it I fell on the floor crestfallen Bursting out into tears, the thought that occupied me, How uncontrollable my own life was How I was so weak that a hair band could defy me? I remember last night When after a fight My husband dragged me into our room I remember how wildly his nails undressed me Both of my clothes and of my soul I can see those marks, which like a monster, He engraved upon the once considered Pride of my family The four walls mocking at me As if they knew there was no escape He pressed me against the wall Injecting pain Droplets of my blood fell on the ground Celebrating his victory And then he left me there After quenching his thirst And fell to sleep like nothing happened I lay there too, lifeless Marriage had always fascinated me, It was always a relation so chaste But now I get it It’s just a license to rape. 💎💎💎 #stopmaritalrape #iamnotyourproperty 💎💎💎 Words: Aastha from allpoetry.com In pic: @shee_wanders Photographer: @theindian_photographer #love #marriage #rape #maritalrape #evils #society #indianspciety #indiagram #instagram #photography #photographer #photoshoot #womenempowerment #feminism #girlpower #wifegoals #groom #bride #wedding #destinationwedding

The women don’t just have to take abuse and marital rape but also are at risk of diseases since these men have no shame in raping their wives but feel shy to go to a doctor. In fact, 54 % of men said they had not even heard of STI/STDs. In fact, 28 % of men believed that “STDs are a result of weak faith, curses or the evil eye” as reported by Dhaka Tribune.

Women have to bear unwanted pregnancies since men refuse to wear condoms. Only 55 % of unmarried men used condoms while only 30 % of married men did. It is disgusting how women suffer because of male depravity. Men don’t just beat their wives up but also cause them diseases and pregnancies! Women lose agency of their own bodies because of the disgusting attitudes of toxic males.

ALSO READ:In Iran, Contraceptives Have Been Banned So Women Can Have More Babies. Because Why Give Women Rights Over Their Own Bodies?

The aim of this study is to comprehend sex and sexual health education quality in Bangladesh especially for boys. Clearly, it is not enough if men are thinking it’s okay to beat their wives up, for sex and otherwise. The study throws light on the need to teach boys from a young age to respect our bodily agency and autonomy. They need to understand the risks of unprotected sex and STDs. Because when these boys grow up they turn out to become predators that risk our safety. In fact, weren’t these guys between the ages of 15 and 24? That’s pretty young. Imagine a 15-year-old already convinced that he must beat his future wife up if she refuses him sex.

ALSO READ:Netizens Open Up About Things They Wish Were Talked About In Sex Education Class