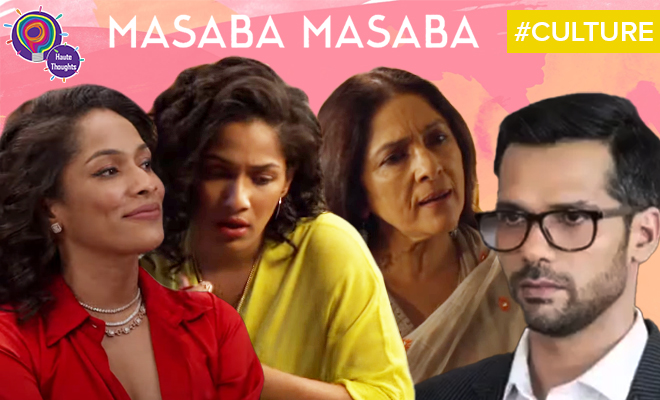 There’s an influx of new show formats, and a personal favourite from the lot are those reality-docu-dramas. You know the ones I am talking about, right? Real people, playing out real situations but in a slightly fictionalised setting? We saw a lot of that in Indian Matchmaking, where we followed the lives of real people, with a touch of dramatic flair. And now, Netflix has another series that does something similar, but takes the fiction a few notches higher. The Masaba Masaba trailer, dropped today, has a look inspired by the real life of fashion designer Masaba Gupta, but donning a layer of fiction that makes the whole outfit more quirky and fun! The show will have the lovely Neena Gupta, Masaba’s IRL mom, play her on-screen mom too. Also starring Neil Bhoopalam, Satyadeep Mishra, Suchitra Pillai, Tanuj Virwani and Rytash Rathore. What’s more, it seems to retain the natural colour of the spunky designer’s personality and glamorous work life, and adds some interesting cameos from Kiara Advani, Pooja Bedi, Farah Khan and (my favourite co-star of Neena Gupta’s) Gajraj Rao!

The official synopsis of the show reads, “Based on real-life moments from Masaba Gupta’s life, this scripted series follows her unique background, the diverse worlds she straddles across fashion and family, and her foray back into the dating world. An inspirational, joyous celebration of her life, this fun series is packed with tongue-in-cheek humour, enacted by the mother-daughter duo, Masaba and Neena Gupta themselves.” As per the trailer, Masaba’s life is a hot mess, that she’s sooner or later going to have to accept and work out.

Also Read: Masaba Is Making Her Acting Debut With Mom Neena Gupta In Netflix’s Masaba Masaba. This Is The Kind Of Reality TV We Want To Watch

But if I could condense my reaction to the trailer into just 5 thoughts, here’s what I would say!

No, I don’t say this in some condescending, snarky way. I genuinely think awkward performances put people off.  It can be weird for a non-actor. Especially when it’s based on their own life. And more, when you’ve to act opposite your National Award-winning mother! No pressure, right? But Masaba looks really comfortable, and not awkward at all. Her dialogue delivery feels quite natural, which I suppose is a requisite to make this format work. Good job!

2. Neena Gupta and Masaba’s mother-daughter banter already has us laughing.

Can I just say Neena Gupta is ah-mazing? And she seems like such a cool mom IRL, which might not be the case in the show. From the trailer, it looks like she’s going to be on her daughter’s case a lot. But I won’t complain, because the resulting banter could be the best thing about the show. I look forward to see their mother-daughter dynamic on screen! I’ll confess, I am one of those audiences that enjoys seeing real relations play out on reel.

3. Thanks, Masaba Masaba. More Neil Bhoopalam is just what we needed!

I sincerely hope Neil Bhoopalam is reading this and takes my appeal to see more of him on screen under advisement. That man’s a looker alright, but I’m a fan of his screen presence, his acting, his diction. Basically, the whole package. His last outing was Voot Select’s The Raikar Case, where he played a cop, and he did a good job of it. And I hope his stint on Masaba Masaba does not disappoint either!

4. This new fact + fiction format is intriguing, but let’s hope there’s more fact in the characterisation of a modern Indian woman and her problems

What really piques my interest about the show is actually its format. I’ll be closely watching to see how the whole fact + fiction formula plays out. Masaba Gupta is one of those modern, strong, independent and unapologetic Indian women, who has let her work do the talking for her. But her mixed heritage has often been talked about, and it’d be interesting to see if any of that is dealt with on the show. Moreover, she seems to have the problems of a millennial woman—unreasonable work expectations, financial woes, difficult relationships, and a mother who’s always on her case. I look forward to see how she navigates all this, because therein will lie the real appeal of the show.

5. Those cameos! That fashion! And the humour!

The series sets the audience up for a lot of smart laughs, like the joke on designer copies and Masaba’s name, which I am sure she gets a lot in real life. And as we all know, reality can be both stranger and funnier than fiction. I know fashion’s going to play a huge part here (duh). Andd honestly, I am counting on them to get insights into how a fashion designer like Masaba goes about things, the processes, the hurdles, the creative blocks and so on. And of course, all the outfits, accessories, and makeup looks this is going to bring along! Her profession gives way to a slew of celebrity cameos. For starters, Kiara Advani shows up, playing a glamours version of herself. And the amazing Gajraj Rao pairing up once again with Neena Gupta is going to be fun to watch! We also caught glimpses of Farah Khan, Suchitra Pillai and Mithila Palkar!

Well, colour me intrigued and actually looking forward to it. Masaba Masaba, at first glance, looks like the fun, bingeable series that I’d be watching on the weekend, or maybe even Netflix Party with my girls. It’s got fashion, humour, romance (and Neil Bhoopalam), and female characters whose problems I hope to relate with at some level. The series is directed by Sonam Nair, who has previously directed films like Gippi and assisted in films like Wake Up Sid. Looks like she’s got enough experience handling millennial stories.

Also Read: Alia Bhatt’s ‘Sadak 2’ Trailer Getting 6.2 Million Dislikes On YouTube Is A Frivolous Argument Against Nepotism. It’s Never Just One Actor’s Film, Is It?