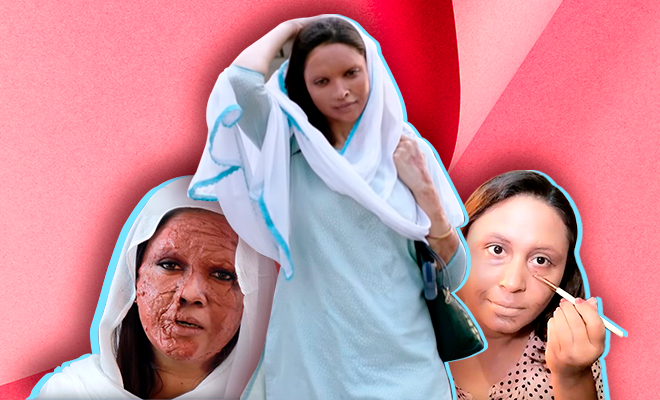 In the last decade, Deepika Padukone has become one of the major forces in Bollywood to reckon with. She is really is the personification of the phrase “beauty with brains” which is why after almost 30 movies, she is ruling the industry. Though at the moment, Deepika is making headlines for a lot of various things. Her presence at the JNU protests in Delhi and obviously her latest movie Chhapaak which is based on the life and struggle of acid attack survivor Laxmi Agarwal. Which you already know about because right now, it is the talk of the town.

Bollywood produces a lot, different kinds of movies, some are funny, some are offensive, and some make no sense at all. Chhapaak is a wholly different kind, it is a super-sensitive movie with a message that has been practically ignored for far too long now. Now a whole lot is being said about the promotional looks, the details, the appearances etc. And of course, we talked about Deepika’s makeup. Because it did transform her. And of course, like with all movies, it spawns plenty of videos.

Content creator on platforms like YouTube pick up things out of a movie and give their reactions or just basically use the movie to make their video get maximum views. Let’s face it, the audience is a sucker for crap like that. Is that okay to do with movies? Yes. But is it okay to use something like this to further your channel, like a makeup video? Oh god no!

Also Read: Deepika Padukone Wants Chhapaak To End Acid Attacks. But How Do You Do Away With The Deep-Rooted Misogyny?

Here is the thing, I did a little digging into Chhapaak this morning because you know, it’s my job. And what I found really made my blood boil. There are almost half a dozen YouTube makeup channels that are making tutorial videos on how to achieve Deepika Padukone’s Chhapaak acid attack look.

It is all kinds of disgusting and insensitive. I don’t think those people understand the impact an acid attack has on a woman. It doesn’t only melt their flesh and bones off, it leaves permanent scars on their body and minds. How can people be so inconsiderate about such matters? Yes, Deepika is an icon and whatever she does becomes a sensation but trying to achieve a Chhapaak inspired look is crossing a very defined line.

Check out all the videos below:

Okay first things first, what made this woman think it was appropriate to make a goddamned tutorial on how to look if you were an acid attack victim? Thankfully this video has only 294 views, let’s hope no more people watch this.

When this video started, I thought okay she will a little more considerate towards acid attack victims. But I was wrong. Her “transformation” is probably the cringe-est of them all.

Women who are victims of acid attacks have to go through multiple surgeries just so they can look at themselves again. But this girl right here thinks it is perfectly okay to apply Fevicol on her face just so she can replicate an acid attack victim. This borders on her mocking them and this video needs to be reported!

Honestly, I couldn’t even bring myself to watch this. How insensitive can people be?

Her disclaimer reads that she has used “skin-friendly products”. Huh, I guess then it okay that she is hurting the sentiments of hundreds of actual acid attack victims.

I understand the craze to follow movies and celebrities but this is unacceptable. It is not only insensitive and shitty but also offensive. I understand that recreating looks from movies is a thing and something that people do but with a movie like this, this comes across as rather desperate.

If we can’t make the lives of acid attack victims better, at least let us try and not mock them like this.

The Trailer Of Chhapaak Is Hard Hitting, Powerful And There’s No Trace Of The Star That Is Deepika Padukone