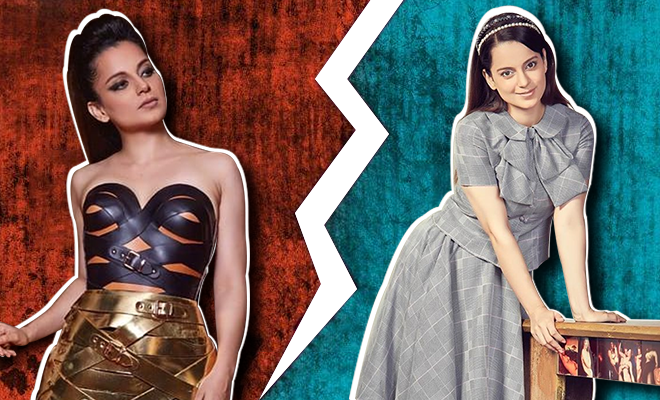 Did They Tone Down Kangana’s Dramatic Promotional Style After The Press Controversy? We Think So!

Kangana Ranaut sure knows how to do a press tour! The actress has never shied away from speaking her mind, dividing her audience more often than not. Her Judgementall Hai Kya junket has been rife with controversial interviews, statements and the ever-present Twitter jabs from her sister Rangoli Chandel. It is all a big mess, something which Kangana herself is tired of and wishes to move on from. One of the ways, we think, to do that is to reinvent her promotional style.

….and chose to style this recent Vassilis Zoulias set like this:

Sure there were many outfits in-between this sudden shift in the vibe. Full disclosure though, we were honestly looking forward to seeing her don one risqué outfit after another. Her character in the movie is certainly not demure! Given the fact that stars are styled similar to their roles for promotional looks, we were looking forward to more brand discoveries from ace stylist Ami Patel, like the Ermanno Scervino organza dress.

…paired with cult fave Agent Provocateur garter and stockings. Even her song OTT avatar in Wakhra Swag got us excited, the actress can pull some some major fashion moments. We can see the shift in her HMU as well, they are less ‘done-up’ and more natural. Is it just a creative decision to keep Kangana’s looks less attention seeking going forward or do our speculations have some weight to them? We might never know. The fact that Kangana has been doing press by herself since the incident have also added fuel to our fire, but we are intrigued by this shift.

ALSO READ: We Love Kangana Ranaut And How She Takes A Stand, But It Isn’t Fair If Hrithik Roshan Isn’t Allowed To Do The Same

Check out other moments from Kangana’s promotional looks below:

Judgemental Hai Kya also stars Rajkumar Rao and is set to hit the theatres on July 26. Are you excited?

ALSO READ: The Trailer Of Judgemental Hai Kya Is Out, And It’s Going To Be A Fun Ride With Kangana Ranaut!