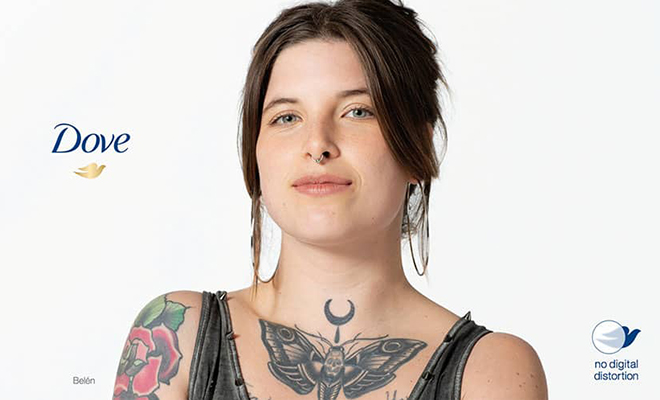 Is No Digital Distortion The Answer To All Our Body Image Issues?

If you’ve ever picked up a beauty product hoping it’s going to change everything, we recommend gently setting it down and dialling down your expectations to the setting that says ‘realistic.’ Because anyone who knows anything knows that Photoshop will do away with every little flaw, and replace it with perfection, so you can really enjoy your insecurities.

Unfortunately, we have been so bombarded with unrealistic body and beauty standards that we start to think, and at some point actually believe, that everything shown to us is exactly how it looks.

And while a lot of clothing brands are starting to get comfortable with the whole idea of not retouching their models, this isn’t something beauty brands have really taken to. So it comes as a refreshing change that Dove has announced that its ads will have a ‘No Digital Distortion’ mark starting January 2019. This is to let women know that the imagery hasn’t been altered to suit the false standards of beauty. Dove has been one of the few brands that has been promoting this as a practice with their Self Esteem campaign.

However, we don’t see enough companies following suit. In 2011, L’Oreal was called out for advertisements that were “not representative of the results the products could achieve”. The Advertising Standards Authority in the UK was in agreement that the images were exaggerated and breached its code of conduct. L’Oreal claimed these were manipulated, but were definitely not misleading.

Closer home, a recent Cosmopolitan cover, featuring Jacqueline Fernandez, faced flak for looking like it had been majorly retouched by someone who was very enthusiastic with Photoshop.

While we are pretty sure this is not going to become the norm, we think a lot of young, impressionable girls would benefit greatly if not bombarded with messaging that’s digitally altered so greatly.

Is anyone listening? We didn’t think so.