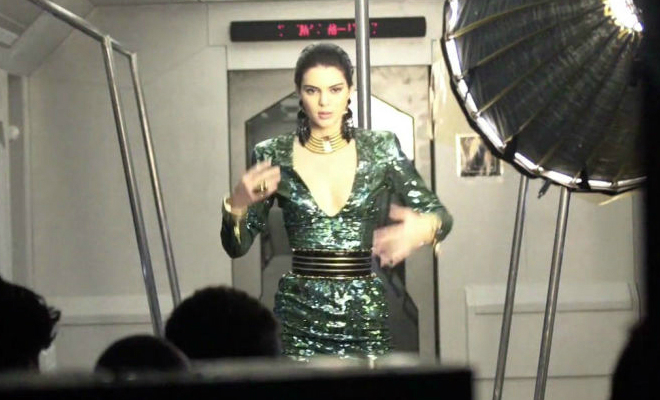 Kendall Jenner Twerks It With The #BalmainArmy

As part of her latest gig as the face of H&M x Balmain, model of the moment Kendall Jenner has been killing it on social media and beyond. And the latest thing doing the rounds is a behind-the-scenes preview of the video campaign starring her and Balmain’s 30-year-old creative director Olivier Rousteing. The duo is shown dancing and ‘Voguing’ at a super slick dance party in the subway no less – with a host of hot dancers in tow.

Rousteing spoke about the video to Yahoo! Style, and said, “I think the concept for H&M x Balmian is putting the couture in the stores. It’s a really rich and strong collection that is infused with the Balmain DNA. … The metro has a sci-fi feeling to bring forward this idea of techno couture. It’s really modern and young. When I see this collection, I think you can party, you can go to a gala, you’re going out and taking a sci-fi metro. It’s like a dream. Everything comes from a dream and a ride. Pop culture and Michael Jackson was also on my mind.”

If you haven’t seen it already, here’s a look at Kendall taking lessons on how to whip and twerk from the “Balmain Army”: