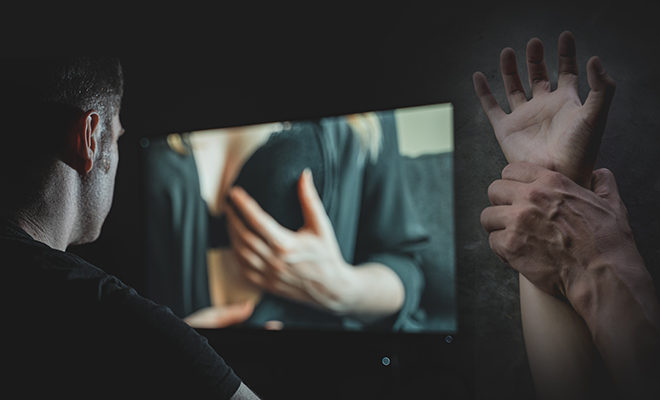 The researchers analysed “the titles appearing on the landing pages of the three most popular online pornography websites in the United Kingdom across a 6-month period during 2017–18.” They collected a total data set of over 150,000 titles making this an expansive study of pornographic content. “We have found that far from being represented as aberrant, sexual practices involving coercion, deception, non-consent and criminal activity are described in mainstream online pornography in ways that position them as permissible,” the report says.

The study found that these titles consisted of keywords that are found in World Health Organization’s definition of sexual violence. These include words like “forced,” “molest,” “grope” and “ambush.” Words pertaining to “image-based sexual abuse” was common too. This includes keywords such as “hidden cams”, “upskirting”, “downblouse” etc.

What’s more the researchers found a huge chunk of titles promoting sexual abuse of underage girls with keywords such as “schoolgirl” and “teen”. Sexual activity with family members is commonly shown in pornography.

These porn sites normalise sexual abuse, sexual violence and inappropriate activity with underage women and family members. It includes such misconduct and potential criminal activity in our social structure. “Taken together, we argue that our study provides clear evidence that sexual violence is a normative sexual script in mainstream online pornography, with significant implications at a social level for understandings of the difference between sexual pleasure and sexual harm,” the study says. “Our findings raise serious questions about the extent of criminal material easily and freely available on mainstream pornography websites and the efficacy of current regulatory mechanisms,” it further adds.

ALSO READ: Tara Kaushal, Author Of Why Men Rape Gives Us Bone-Chilling Insights Into The Minds Of Sexual Offenders

“Remember, a kink that LOOKS degrading or humiliating is NOT the same thing as an illegal, abusive, or non-consensual act,” the report states. “What goes on between consenting adults is exactly that: consensual. Non-consent must be distinguished from consent to relinquish control.”

Tara Kaushal, author of Why Men Rape – An Indian Undercover investigation told Hauterfly that porn and child abuse has “a symbiotic relationship”. She said, “There is something known as contagion, a theme I have explored a lot in my book. Let’s take child pornography, for instance. When you start encountering child pornography, it can change your palate for arousal. And if you were attracted to kids but you were constantly reminded that it was wrong, you’d perhaps get your impulses under control. But when you see child pornography and that so many people are doing it, you feel you are not as much of a freak as you previously thought you were. In that sense, it allows you and enables you. Child pornography furthers child abuse.”

When the world is dealing with people who don’t understand consent, why are pornsites not taking any responsibility of the content they publish?