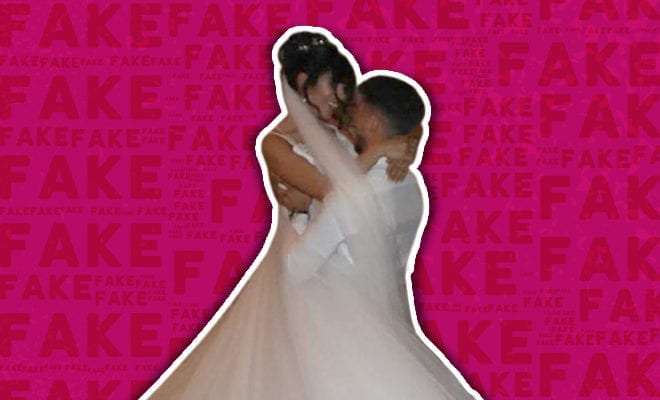 It’s very annoying when someone refuses to leave you alone, even after you’ve told them you are not interested – be it an ex or a creepy guy hitting on you. In fact, when I was younger, and there would be guys who thought persuasion is the key, I would tell them I am engaged. I started wearing my ring on my ring finger and started telling them that I will be having a wedding soon and they’d go like but you’re so young. And I would tell them, that’s how it is. It’s funny how some men don’t respect your wishes but will back off out of respect for a man they don’t know.

Recently, a young woman, Sarah Vilard (24) went viral after she revealed that she had faked her own wedding to get rid of her ex who was toxic and used to stalk her. She revealed she had staged a photo shoot, you know with a wedding dress and a groom. Man, Vilard really made it look realistic!

The German woman got a guy to play groom, a fancy looking venue and even convinced some of her friends to join in! Vilard revealed she did that to stop herself from reconciling with her ex and to get rid of him forever.

After she posted these fake wedding photos, her ex reached out to her. He was shocked and even accused her of cheating on him. “I deleted the wedding pictures right after he saw them and blocked him everywhere,” she said in the video. “He stalked me and came up to my house for the next few weeks but then finally moved on and even left the country.”

So now that she shared the secret, Vilard said she was criticised by many netizens but then a lot of people also enjoyed the move. Some followers said they “love the pettiness,” or would definitely do this in a similar situation, if they had the resources. “Of course I got hate but I know there are also people that respect what I did as long as it was good for my own amusement or mental health, or even just felt right to me,” Vilard said.

ALSO READ: Woman Accidentally Texts Her Boss A Picture Of A Champagne Bottle Moments After Lying To Him About Not Being Able Work

That must be hella expensive though. To shell that kinda money for a wedding that isn’t even real! “I don’t want to talk about how much I spent on the fake wedding,” Vilard said.

I mean, it’s a little extreme but I hope she had fun while at it. She got rid of her ex, got dressed in a pretty wedding gown and even got some beautiful pictures. This is like Rose pretending to get married in Two and a Half Men, although her intention was to get with Charlie.

While some people said she’s got too much time in hand, some called her crazy, some said he was lucky to get rid of her. But a lot of people just felt relieved she didn’t kill him to get rid of him forever. I think that counts, doesn’t it?

ALSO READ: Woman Faked Pregnancy Bump With Hollowed Out Watermelon To Smuggle Drugs. This Was Way Too Creative!