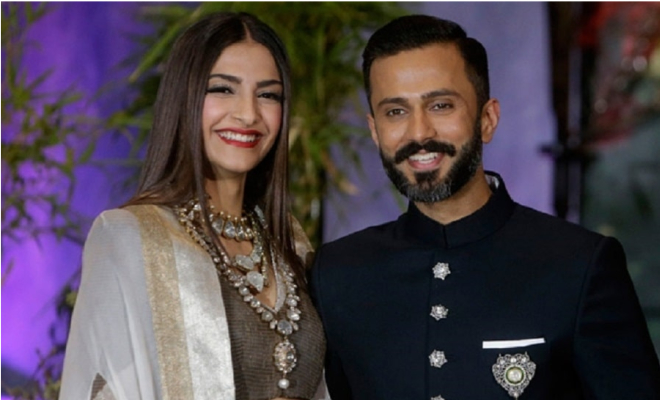 Sonam Kapoor Might Be Moving To London With Hubby Anand Ahuja. We Have So Many Questions!

After dating for two years, Sonam Kapoor and London-based businessman Anand Ahuja got married last year. While there was a lot of speculation right in the beginning about whether she’ll be moving to London, the couple didn’t reveal anything.  They, however, kept travelling between London and India. But, but. According to a Mumbai Mirror report, Sonam Kapoor has already started looking for a property in Notting Hill, London and has put her Mumbai flat for sale.

The duo have been busy, and very often they are in different cities due to their work commitments. In fact, they didn’t even go off for a honeymoon until recently. The couple flew to Japan and literally painted Instagram red with their adorable pictures. Sonam took to the social media platform to express herself, “I ask myself every day… How did I get so lucky to marry my best friend in this world.”@anandahuja Anand and I didn’t get a honeymoon so this was honeymoon/anniversary/birthday trip all rolled into one. And let me tell you it was worth the wait. I had the best time of my life. Thank you my love.”

Sonam and Anand tied the knot on May 8, 2018, in a traditional Anand Karaj ceremony, which took place at her aunt Kavita Singh’s mansion in Mumbai. While the reception saw the crème de la crème of Bollywood shaking a leg or two, the couple kept it rather simple.

In one of her interviews, Sonam revealed how their first date was, she said “Recalling my first date I was apparently wearing the worst sneakers he had ever seen. I keep telling him that he fell in love with me despite my bad sneaker game… That day, walking and talking in London, I knew he was the love of my life.”

ALSO READ: Sonam Kapoor Shared A Picture Of Her In A Train And Anand Ahuja Suggested Taking A Trip. How Cute!

That’s really cute! Sonam and Anand make such an adorable pair. And while most of us have taken the same step of moving cities to be under the same roof as bae, we really hope she will be around to amaze us with her sense of style! On the other hand, we totally feel she could explore the fashion scene in London and make us proud.

On the work front, Sonam will be next seen in The Zoya Factor, alongside Dulquer Salmaan. Directed by Abhishek Sharma, the film is based on Anuja Chauhan’s novel of the same name.