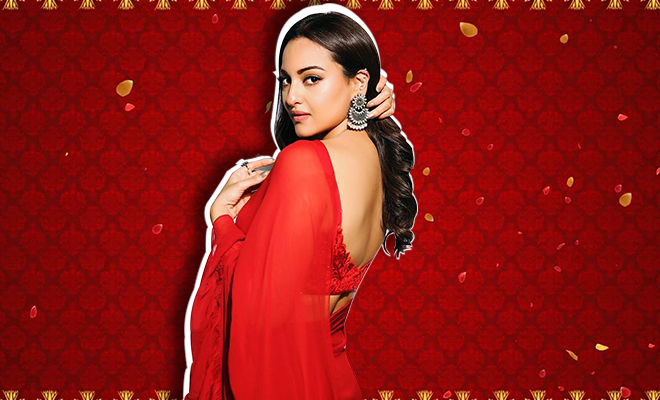 Dabangg actress Sonakshi Sinha is currently busy promoting her upcoming multi-starrer film, Mission Mangal along with its entire star cast. She’s also got Khandaani Shafakhana in the pipeline so we are guessing this is a busy time for her. But she’s quite the star and has been making an appearance for all promotional events. Recently, at the trailer launch of Mission Mangal Sonakshi Sinha expressed her thoughts on the film and said that the film celebrates the spirit of womanhood and she has never felt prouder.

Also read: The Mission Mangal Trailer Is Out, The Women Are Playing Key Roles And It Will Give You Goosebumps

Apart from Sonakshi Sinha’s professional life, fans are also interested in getting details about her love life, because, we are always curious about these things. After all, we all want to know everything about our favourite actors lives. Sonakshi Sinha has been kind of quiet about her personal life but she did let us on a few details. She said that her parents want her to date a “susheel ladka,” and she says it is hard to find someone like that in Bollywood. Don’t know how true this is but rumour has it that Sonakshi Sinha has already dated someone from the industry!

The Kalank actress also went on to reveal that she was in a relationship with someone from the industry. We could all take jabs at guessing who this lucky guy  is but as of now we don’t know whether Sonakshi Sinha is seeing anyone or not!

“I have dated a celebrity and the world doesn’t know,” she said, without giving out too many details on her relationship status. “If my boyfriend cheats on me, he won’t live to see the next day,” Sonakshi added. Well, we wish Sonakshi finds her perfect man but currently the diva is one of the busiest actress in town with way too many films to have time for a relationship.

Sonakshi Sinha is also promoting her film, Khandaani Shafakhaana which is based on the story of a young girl who inherits her dead uncle’s sex clinic in a small town in Punjab. The film is slated for release on August 2. Speaking on working with a female director for the film Sonakshi said, “Women directors come with a kind of sensibility and sensitivity that male directors do not have.”

Also read: Sonakshi Sinha Is Glad Her Sex Comedy Is Being Helmed By A Female Director And We Can See Why

Who do you think Sonakshi Sinha has dated from Bollywood?!