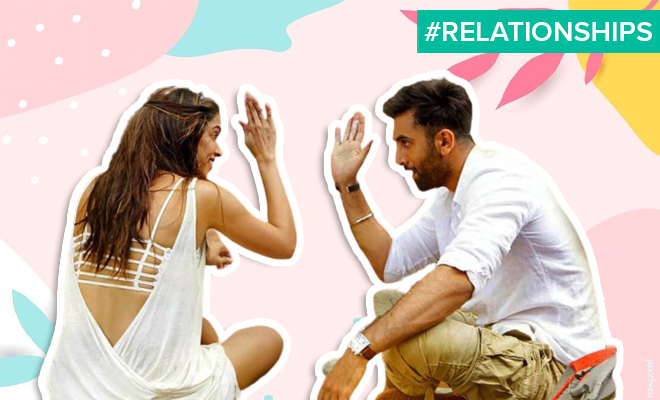 It is said that the first year of a marriage or a relationship is the toughest. Firstly, the pre-relationship stage fills you with the love hormone and everything that is annoying still seems cute to you. ‘Aww, baby is so possessive’ becomes ‘you’re so insecure’ once the love drug wears off. Secondly, you begin to know each other better and realise that they aren’t exactly customised to your preferences. So several couples break up when the going gets tough while several more learn to work their way around the cons. Let’s admit, all humans are difficult and complex and nobody will be flawless.

When I had started seeing this guy we used to have so many fights, most of which were based on misunderstandings and lack of adaptability towards each other’s flaws. Eventually, we kinda accepted that we both can be annoying at times and that’s okay. We figured a way around each other…I have mine and I can tell he has his. One of the things that really help I believe is playfulness. Somehow, even the toughest situations to navigate become simpler with a little lightheartedness. Why do you think most people add a laughing or cheeky emoji at the end of a snarky comment?

In fact, research says that adult playfulness can actually lead to better relationship satisfaction. A study titled ‘To Love and Play: Testing the Association of Adult Playfulness with the Relationship Personality and Relationship Satisfaction’ was conducted by Martin Luther University Halle-Wittenberg. The study says, “Playfulness is positively associated with Culture/Openness, Extraversion, and Emotional Stability, but negatively with Conscientiousness.” Outside the Big Five personality traits, playfulness is robustly associated with, for example, the utilization of health-promoting stress coping, wellbeing, adaptability to environmental demands, creativity, mastery orientation, innovation and intrinsic motivation, sexual selection…Overall, individual differences in playfulness have an impact on many important aspects of adult life.”

The researchers found that teasing your partner and being playful can facilitate intimacy and be used to resolve “moderate conflicts and tension”. I have been using playfulness to avoid potential conflicts from erupting and bae has no clue! Works for me though. The study also says that it facilitates the “emergence of positive emotions” and it improves communication.

Playfulness can also improve your interpersonal strengths such as social intelligence, fairness and leadership. The study found that when a person is vivacious in a relationship, it not only keeps you more satisfied but also your partner. No wonder, my ex kinda sucked the fun out of my life. No offense ex, but you gotta live a little.

“People who were higher in Other-directed playfulness were more sexually satisfied, more engaged in the relationship, and more confident about the long-term stability of the relationship. Similarly, intellectually playful people reported being more satisfied with the relationship, more fascinated by the partner, more sexually satisfied, and more optimistic about the couple’s future,” wrote Proyer and Brauerat. “Thinking of typical interactions of couples who display behaviors such as giving each other nicknames, humorously recollecting or re-enacting joint experiences, or lightly teasing the partner to cheer him or her up suggest some possible explanations,” they further added.

So basically, don’t be hesitant to poke fun at bae and give equally savage responses to them. Pillow fights, teasing, and being lively can do a lot for your relationship and for yourself. Life’s too short to be too serious. Being playful can improve your compatibility by resolving conflicts as well as intimacy and general satisfaction. What’s more, it can make time between the sheets even more exciting. I love those moments when you just lie down cuddling, talking and laughing. Sex shouldn’t feel like an operation but an amalgamation of laughter and merriment and orgasms.

ALSO READ:#Relationships: Cuddling With Bae Can Keep The Doctor Away. Here’s How