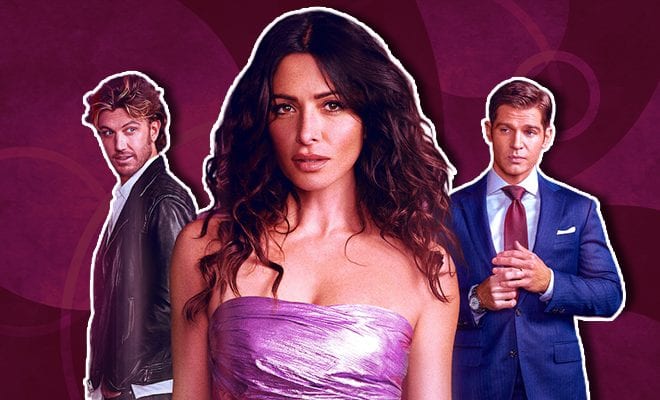 Netflix’s Sex/Life Is Not Just A Steamy Show. Here Are 5 Important Relationship Lessons You Can Learn From It

When I started watching Sex/Life, I had no idea what to expect. I had not even watched the trailer before I dived right in and believe me, I was so glad I had my earphones on and no one around. The start of the show sets the premise for all the hot sex she had before marriage. Honestly speaking, it really got me hot because oh boy, the pool scene was so delicious and romantic. It was the kind of pleasure I would love: a mix of playfulness, perfect ambience and a man who focusses on making me go wild. Billie (Sarah Shahi) and Brad (Adam Demos) were wholly invested in their physical intimacy and that is why it was so great. And yet, there are reviews that say it did nothing for them. I feel, you need to experience true intimacy to be able to imagine it better.

My view of Sex/Life too is not objective. I am a person who is empathetic in general. A review or two talk about how Billie was all about horniness but you tend to overthink about what’s missing. We do that, don’t we? And sex is a major part of your relationship; maybe many women have learnt to ignore it but for many others, it is. An important part missing from her relationship is cause enough for anxiety. In fact, sexual gratification is more than a part of relationship for her, it’s for her personal satisfaction and she will not be shamed for it.

I am afraid but the reviews boast of a culture that doesn’t understand flaws. The reviews represent the cancel culture we have today. If you go beyond your desire of cheap thrills and judgement, there are a plethora of valuable relationship lessons you can learn from Sex/Life – essentially involving what you shouldn’t do. But really, it’s out there. Here’s what I learnt.

At least 50 times, you can hear Billie remind herself that Cooper (Mike Vogel), her husband is perfect. She reminds herself her life with him is perfect. And then there are other people, oblivious to their actual life, remind her the same. Sure, he is well-settled, who remains loyal and gives her stability. He never fled, like her ex Brad did. Cooper is committed, gives their children hugs and kisses so he must be a great husband. Wrong.

He is incredibly narcissistic who fails to see the post-partum mental health issues his wife is going through. He fails to ask her about her day, her life, and make sure she is okay. All he talks about is himself. He fails to understand female desire and his contribution to the children is only the hugs and kisses he gives them before and after work.

When he reads her journal, he starts whining about how she is fantasizing about her ex but fails to realise that he drove her to do that by completely cutting off sexual intimacy with her. He is angry with her throughout the series and acts like a victim instead of feeling sorry for making her feel completely invisible. And then as revenge to a blow to his ego, he lets another woman give him a blowjob and then blames his wife for it. Erm, see how convenient?  That is her fault but he won’t take the responsibility of driving her nuts with sexual deprivation?

Worse is that even when he tries to give her what she desires, and makes it sound like such a charity, he is actually doing it purely to fix his own bruised ego. You can see that when he continues to thrust in her intensely in the car sex scene ignoring her cries to slow down. Or when immediately after reading her journal, he pins her on the kitchen counter and has angry sex with her, just to prove his dominance.

This is a selfish, narcissistic manchild who may have been well-settled, non-confrontational and loyal in the past – as long as his ego was never bruised. So, he may sound like a good husband on paper but only someone in a relationship with a guy like that knows how suffocating it is to feel not desired and invisible.

The biggest mistake you can do is to share your relationship problems with those around you. Of course, we need an outlet, someone to talk to. But it can be one or two most trusted friends/family members. Billie talking to Sasha, her best friend is fine because she would have her best interest in heart. But then she starts sharing with these bunch of freak suburban wives with questionable marriages and it backfires. Cooper starts sharing with his shady colleague and his hot boss who is definitely interested in him. She keeps pushing him to break his marriage. That is f*cked up. When you let others know that you are both vulnerable, the opportunists will take advantage or judge you. Third-party influences only mess up a relationship, unless it’s your therapist.

You can see that both Billie and Cooper are non-confrontational by nature. They have time and again bottled their feelings, anger and allowed their problems to build up. Billie never admitted, even to herself, that she wants to return to her PhD. She felt so indebted to Cooper for the commitment he offered after a commitment-phobic Brad that she chose to ignore everything else that she needed from him. She didn’t tell him that she doesn’t feel desired and she needs more sexual intimacy. And Cooper never picked up the non-verbal cues, even the obvious ones that involved her initiating sex.

Cooper, instead of having an open discussion about Billie’s dissatisfaction and her fantasies, chooses to sulk over it and go in full crazy mode. Worst is, the only time, he remotely has a heart-to-heart is with Brad. Seriously, communication can solve everything so have those uncomfortable conversations.

The thing is, in a relationship, sex is not just about sex. You can see that from the performance anxiety Cooper is feeling after he is hurt about Billie fantasizing about her ex. And sex is definitely not just about intercourse. Several research points out that true physical intimacy improves when you feel your partner is responsive to your needs, which Cooper definitely wasn’t, even in non-sexual ways. Also, was it the thrill that Billie craved? No, it was the feeling of being desired by your partner – that was so satiating to her. She needed both commitment and feeling desired; unfortunately, one of the two was missing in both her relationships. Having said that, don’t settle for that. There are people out there who can give you both. And if there’s ever a choice, remember you can work on the physical intimacy but you can’t fix someone with commitment issues.

The reason Billie is so messed up is that she feels this great guilt for having fantasised about her ex. She feels her husband is perfect and that is wrong for her to have those thoughts, to allow her sex deprivation lead to fantasies. It’s something that was happening naturally to her. But because of that guilt, she has accepted Cooper’s abusive behavior – when he spends the entire night with his boss, when he allows another woman to give him a blow job, when he doesn’t respect her sexual boundaries and consent, treating her like he owns her, when he goes through her personal journal. She accepts all of it because she feels so guilty and feels it’s her responsibility to fix things now.

The result? The painful shift in power dynamics wherein the husband grows to become a powerful, spoilt manchild and she needs to quietly tolerate all the nonsense he does, just because she wrote some things in her journal. You can be sorry but it doesn’t mean the other person can strip you off your power in the relationship.

ALSO READ: Sex/Life On Netflix Isn’t Perfect. But Here Are 5 Things It Got Right About Female Pleasure, Marriage And Friendship

Sex/Life is about a lot of other things too but those things are definitely evident – female pleasure, normalising breast feeding, performance anxiety and sexual desire. Don’t let the steaminess blur the real relationship lessons though because if you want to know what to not do, this is it! Also, last but not the least, hide your f*cking journal well!