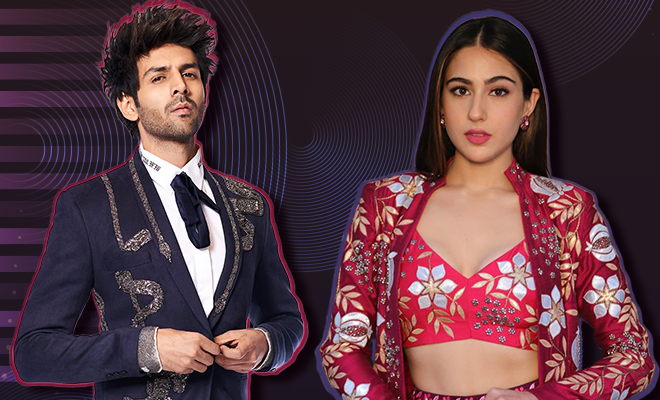 Kartik Aaryan Ditched A Work Commitment To Spend Time With Sara Ali Khan. And They Say They Are Just Friends!

Kartik Aaryan and Sara Ali Khan’s Love Aaj Kal 2 has not even released its teaser yet, and already everyone’s bruiting about their chemistry! Recently, Kartik Aaryan flew to Bangkok, where Sara Ali Khan was shooting for Coolie no. 1, to bring in her birthday. He had even posted a loved-up picture of them on Instagram. But then, they were not dating. Apparently. Previously, Sara Ali Khan too had gone to Lucknow to visit her bae at work. They still claimed they were not dating. What started off with Sara’s confession on Koffee with Karan about her crush on Kartik, has transcended into something strong and super mushy, if I must say. But just so we are clear, they still claim to be not “dating.” Recently, if the grapevine is to be believed, Kartik went ahead and cancelled a work commitment to honour the date commitment with Sara. Meanwhile, my bae can’t even shift his gym timings for me. Maybe, it’s time to put him up on OLX.

According to a Mumbai Mirror report, the Luka Chuppi actor was supposed to make an appearance with Katrina Kaif at a star-studded wedding in Bali. But he ditched it at the last moment, to be with Sara! The wedding was attended by other celebrities such as Neha Kakkar, Maniesh Paul, Nora Fatehi, Boney Kapoor, Sanjay and Maheep Kapoor with their daughter Shanaya, Khushi Kapoor, among others.

During the shoot of Love Aaj Kal 2, the duo bonded really well. They went out on dates, bike rides, and also spent a lot of time at Sara’s residence. After the wrap-up, they posted on Instagram how much they would miss their moments together. However, their connection is strong enough to sustain time and distance. Both the cuties are putting efforts in making time for each other, as much as possible. And while, prioritising your bae is cute and all that, but Kartik – work is work! At the risk of sounding like a teen’s mom, I don’t think it’s cool to ditch your professional commitments. Repeated offences will not work very well for either of their careers. We have all been there though, at least in high school, ditching important lectures to spend time with bae. And that’s why I am not raking in millions right now. Or at least, that’s what I tell myself.

On the work front, Sara Ali Khan has been shooting for Coolie no.1 alongside Varun Dhawan. Kartik Aaryan too will next be seen in Pati Patni Aur Woh (remake of the 1978 movie of the same name) alongside Bhumi Pednekar and Ananya Panday. Love Aaj Kal 2 is slated for February 2020.

Netizens Were Impressed With Sara Ali Khan For Carrying Her Own Luggage. We Get That It’s Humble, But Impressive? Nope!(Opens in a new browser tab)