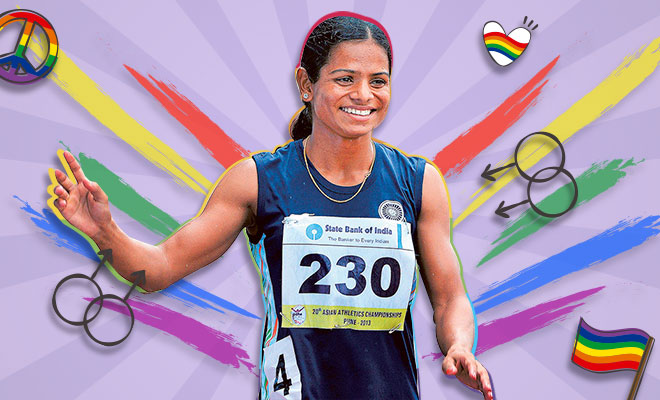 India’s Fastest Woman, Dutee Chand Comes Out As A Lesbian And Her Sister Has Zero Chill!

Even though the Supreme Court has legalised same-sex relationships, the social stigma around it is still prevalent. We know it’s not a crime anymore, but how many people in our society are actually not frowning upon this? Recently, in an inspirational turn of events, India’s fastest woman, Dutee Chand, revealed that she’s in a same-sex relationship.

The 100 m record holder and winner of two silver medals at the Asian Games 2018 is the first Indian sports personality to officially declare being in a same-sex relationship. However, Chand did not reveal the identity of her partner to avoid making her the centre of undue attention.

“I am having a relationship with a 19-year-old woman from my village for the past five years. She is studying BA 2nd year in a Bhubaneswar college. She is a relative of mine and whenever I come home, I spend time with her,” Dutee told PTI.

Thanks to SC, all is well!

However, while her parents have not raised an objection, it hasn’t gone down well with her elder sister. In fact, her elder sister has even threatened to send her to jail, except that she can’t, thanks to the SC! “My eldest sister kind of wields power and authority in my family. She has thrown out my elder brother from home because she does not like his wife. She has threatened me that the same will happen to me. But I am also an adult who has individual freedom. So I decided to go ahead with this and make it public,” revealed Chand.

ALSO READ: Section 377 Is Down! Homosexuality Has Finally Been Decriminalised!

Honestly, we aren’t dumbstruck by this at all, because no matter how much we say we must live and let live, history says, humans haven’t exactly been doing that. We’re the most anti-live-and-let-live species of all, as a matter of fact. Chand may not have the support of her sister, but she is definitely being applauded by the open-minded of our lot.

Her elder sister, howver, claims that Dutee Chand’s partner is basically a gold digger, “My eldest sister feels that my partner is interested in my property.” However, Chand believes in her partner and is in it for the long haul. She says, “She is kind of a soulmate for me, and I want to settle down with her in the future.” Love is love is love! And we’re glad that Chand has the bravery to not just take a stand for her sexual preferences, but also for her choice to love whoever she wants.

ALSO READ: Forget DeepVeer, Alexa And Siri Just Got Married In The Lesbian Wedding Of The Century!

This is not the first time, Dutee fought against society for being who she is. She was banned for one year by the International Association of Athletics Federations (IAAF) in 2014 for having higher testosterone levels. She fought and won the landmark gender case against IAAF, in an appeal to the Court of Arbitration. This led to the suspension of IAAF’s policy on hyperandrogenism for two years. Later, the world body changed the policy altogether for good.

Dutee, you’ve made India proud in ways more than one! You’ve won medals for the country and now we’d say you deserve an applause for giving courage to several people to come out too.

Dutee Chand is currently training to qualify for the World Championships and the Tokyo Olympics next year.