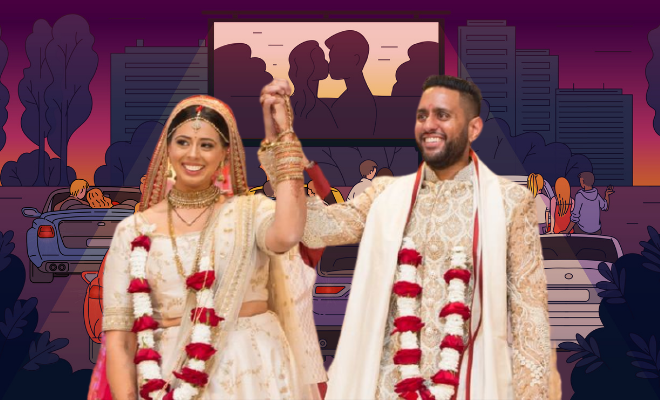 Indian Couple Marries In A Drive-In Wedding In The UK. The Pandemic Has Made Us Super Creative

Why do we forget that weddings aren’t about the grandeur but about love? And when you truly want to start your life together asap, no pandemic can stop you. Which is why, Indian couple based in the UK, Roma Popat, and Vinal Patel had a drive-in wedding at Braxted Park in Chelmsford, Essex.

Their guests watched the drive-in wedding from their cars on the big screens placed outside. They were given a hamper consisting of snacks as well as a safety kit consisting of an anti-bacterial hand gel and bin liners. Apart from that, they could order food from a website and would be delivered by servers. People were discouraged from roaming outside their cars and were told to venture out only for using the washroom. It isn’t the fun-est wedding they must have attended considering the restrictions but the few people who just want to be there for you on your big day would love the opportunity.

The drive-in wedding was also live-streamed as another 300 guests watched them tie the knot live. Roma said, “Both of us had the most amazing day and we have since had so many calls and messages from guests saying how much they enjoyed the experience and felt part of it.” She further added, “It literally meant everything to us to have everyone there, albeit in a slightly different way to the one we envisaged. It’s a day we’ll never forget.”

The UK currently has a 15-guests cut-off for weddings and the couple was able to work around it to have more people without even violating the rules by having a drive-In wedding.

Wedding planner Saheli Mirpuri who made this drive-in wedding this possible said, “As Asian wedding planners, we’re used to large numbers, so it’s been extremely difficult. But you’ve to get creative and think outside of the box…The couple initially brought up the idea of a drive-in wedding as a joke. It sounded crazy but the more we talked about it, the more it seemed possible.” She further added that it could become a new trend, “We’ve had quite a lot of calls from couples keen to replicate the idea, so it could be a new trend.”

The couple said, “Both of us had the most amazing day and we have since had so many calls and messages from guests saying how much they enjoyed the experience and felt part of it.” They were glad their guests could attend, “It literally meant everything to us to have everyone there, albeit in a slightly different way to the one we envisaged. It’s a day we’ll never forget.”

The pandemic has pushed people to think outside the box and come up with ways to pull off a wedding, because why delay a life of togetherness? For some, it’s the beginning that matters more than the ceremonies and a fancy venue. A couple got married in the living room of their New York apartment. “In three whirlwind days, with the couple’s aesthetic in mind, we transformed their New York apartment,” wedding planner Jung Lee told Brides.com.

A Punjabi couple in California shrunk their guest list from 300 to three and got married at the waterfront. Do you remember the couple that got married on the Brooklyn bridge? Zoom ceremonies, home weddings, drive-in weddings and unconventional venues – we are really taking materialism out of marriages.

ALSO READ:This Couple Got Married In A Chapel At The Hospital They Work At After Their Wedding Got Cancelled. How Romantic Is This?

2020 has been a year of epiphanies born out of misery. We’ve realised so many things and we needed a divine intervention for that to happen. For instance, I know I can save a lot of money by not going out almost every day of the week. Instead, I would prefer using my time in a rather productive way. I also realised that food isn’t love and emotional eating gets us nowhere. We don’t need to meet our friends often to stay connected. Mental health is more important than anything else and sometimes, you have to choose yourself even if others feel offended by it. But most importantly, with the tight restrictions on public gatherings, the world has woken up to the true essence of weddings. It isn’t the décor, the number of guests, or the money you spend on your outfits. A wedding is a celebration of the union of two people, wanting to spend their whole life together.

ALSO READ: #Trending : This Photo Of A Couple Getting Married On Brooklyn Bridge Went Viral And The Story Behind It Is The Cutest