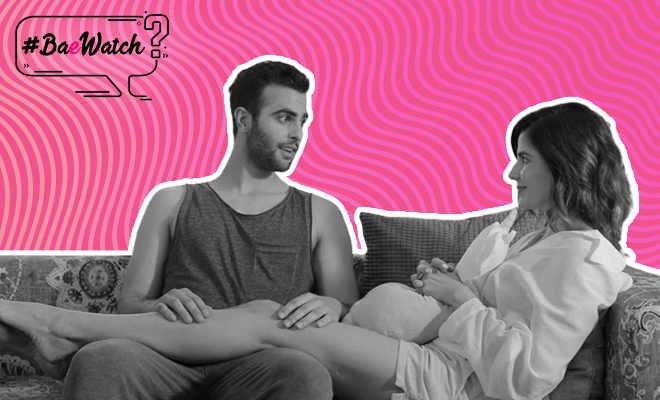 The world is divided when it comes to period sex. There are couples who swear by it and then there are people who feel grossed out by just the thought of it. Of course, there are several known benefits of period sex – it relieves cramps, improves your mood and is like a spa for all that body ache and irritability. But it involves blood and we’ve grown up with so much taboo around menstruation that it feels “dirty” to many. It makes you feel vulnerable and sometimes, you don’t feel ready for that wall to come down.

But those who’ve had period sex and successfully aced being comfortable with it, claim that it’s one hell of an experience. There’s no one size fits all. Every woman is different and so are the ways that gets us off.

So how do you decide whether you should try period sex or not? And if you do decide to, what do wish to hear so you feel more comfortable with it? When a woman wrote to us about thinking of trying period sex, the ladies at Hauterfly decided to give her our honest opinions.

So the last time we were making out, I was on my period. My boyfriend didn’t seem fazed at all about having period sex and assured me that it’s okay, we’ll just grab a towel and all that. However, I have never tried having sex on my period, which is why, in that moment I said no. I wanted to give more thought to it. We discussed later, and he is super chill about it. He doesn’t find it gross. Maybe it’s good because well, my level of horny shoots up just before and during my period. But I have found it a little gross. Should I give it a shot? How can I feel more comfortable about it and not icky?

“It can be a lot of fun as long as you lay down some ground rules.”

Mansi Shah, Managing Editor: “Ahem. On a personal level, period sex doesn’t work for me. It might be messy and there are odours and while it’s all natural and I am down with that, I am not entirely comfortable with having sex during that time. Like with all matters related to sex, sit your boyfriend down and tell him clearly what you’re okay with if you’re going to be doing the deed during aunty flo’s visiting days. And this is different from regular sex because there are tender spots, heightened sensations etc. I am sure it can be a lot of fun as long as you lay down some ground rules, ones that work for both of you. He might be comfortable with it but sex is no fun when only one of you is fully into it.”

“Know that at any point you can ask to stop.”

Jinal Bhatt, Associate Editor: “NGL, sis, I have had similar thoughts about period sex, mostly because we feel so horny during periods but it feels a little ‘weird’. And it doesn’t just have to do with the problematic social conditioning we have about periods being ‘bad’, but also the very valid fact that, well, it is blood and clots and waste that your body is discharging. So it’s okay to feel a little icky. There’s a scene in the series I May Destroy You (TW) that also shows period sex, if you want to test how you feel about it.

“If blood freaks you out, positively refrain from looking at his penis post sex.”

Akanksha Narang, Features Head: “We all have that friend who hates a dish they’ve not even tried. And then one fine day, when they do, their mind is blown. When you imagine period sex, you may imagine it looking like a crime scene. How will you know until you try it out? It isn’t quite like a scene from the Saw franchise. You’re horny during your period, and you’re sensitive down there. This can mean you can feel more and possibly get wilder orgasms. And if he is gentle, it can relieve some of that breast tenderness too. Having said that, think about the pros and cons. If you feel really up for it, you might as well be pleasantly surprised! It’s great that your partner isn’t grossed out by period sex.

Place a towel under you and wash yourself before having sex. Keep a box of tissues/napkin handy. You can also keep your underwear/tampon on until it’s time for penetrative sex. And if blood freaks you out, positively refrain from looking at his penis post sex. You probably already know but protection is important, even in period sex. Also, you can always withdraw consent if you feel uncomfortable while at it. Discuss these things with your boyfriend beforehand – the dos, the don’ts and expectations.”

“Start by taking precautions like using used sheets or a towel.”

Sadhika Sehgal, Trending Head: “Period sex, despite largely being dismissed as gross and unhygienic, has actually proven to be quite relieving for cramps. However, every woman in entitled to having her personal view about it. Some women are comfortable in going for it, while others refrain for a number of different reasons. As long as you’re willing, trying it has no harm. However, at no point should you feel uncomfortable and pressurised to go for it. The fact that your boyfriend is supportive, in whether or not you want to indulge is a good start. Start by taking precautions like using used sheets or a towel, and going in with a normal mindset. You might just end up enjoying it!”

“You’ll never know if you like it if you don’t try it.”

Mitali Shah, Lifestyle Writer: “Here’s the thing, yes, it sounds like it can be gross and uncomfortable but it can just be a psychological thing. Point is you’ll never know if you like it if you don’t try it. If your boyfriend is chill with it, give it a thought and try it out. If you don’t like it, you never have to do it again but imagine if you do then your extra horniness problem is solved. So yeah, give it shot but only if you’re comfy!”

ALSO READ: People Reveal What They Love About Period Sex

Anjali Agarwal, Fashion & Beauty Writer: “Period sex sounds like it would be messy, which it could be honestly, but it can be fun too if you are in the mood and are comfortable. Women have admitted to have experienced a better sexual pleasure when they are menstruating compared to normal sex. Plus, it’s completely safe and if your partner is on board, I don’t see why you shouldn’t try it. Just be extra careful since you would be pretty sensitive down there during periods and don’t forget the towels to keep the sheets from getting messy. As long as you are completely at ease and enjoying it, it shouldn’t be awkward. I hope! All the best, though!”