After Two Dates, These Guys Took A Trip To Costa Rica And Have Been Stuck There For Two Months. Sounds Like A Reality Show. 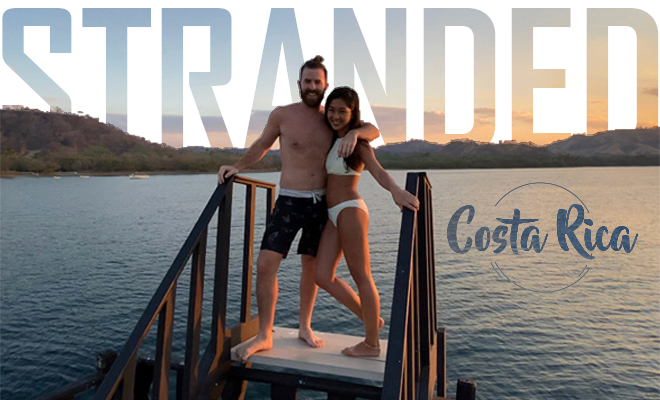 I am a person who feels the happiest in her own tiny circle of people. So I may, once in a while find it pleasant to meet new people or even have a blast at a house party with people I just met, but there’s a time limit. I cannot put my social side forward for long, and after a while, I just like to be on my own. For that reason, I like to keep my first few dates short, like grab a drink or coffee – until I like them enough to spend more time with them. I guess most of us are like that.

However, this couple from New York City, Matt Robertson, and Khani Le, who met on a dating app is currently on a two-month-long third date. Before the coronavirus outbreak became a pandemic, Matt and Khani made a spontaneous plan to fly to Costa Rica for a quick vacation in March. However, close to their return date, their flight got cancelled and there hasn’t been one to date.

“We’ve been trying to fly out with Delta and then we tried another airline the other day,” Matt told People. He further added, “We booked another flight that we’re hoping will go out within the next week. But we don’t know if it’s going to happen. Every single flight so far has been canceled.”

The duo booked the flights after their second date went really well in early March and because the flight prices were really dipping. They were jokingly telling each other how badly they both needed a holiday. One thing led to another and they were already zeroing in on destinations. “Then it turned real because neither one of us backed down. I’m always testing people, and when she wasn’t backing down, I thought, ‘All right, I’ll keep going.’” Matt revealed.

During that time, they didn’t know that it would blow up to become a pandemic. “Trump was still saying, ‘It’s not that big of a deal. It’s the flu,’ or whatever,” Matt explained. So off they went to Costa Rica and were having a gala time. However, soon the guests from their hotel began leaving until only eight of them were left.

Lucky for them, they have been getting along pretty well and their chemistry has only gotten better. Khani told People, “I don’t think we really had expectations about what it would it be like. I feel like we’re both similar in the fact that we kind of go with the flow, seeing what it’s like. I feel that we have a pretty similar approach to dating. We weren’t looking for anything serious, to have a good time, and we were both pretty independent.” This is really amazing! It’s great that they are having fun. They seem to want the same things and maybe that’s why they went on this trip just after two dates.

But being stuck with just one person can get on your nerves. How are they managing with giving each other space? “So we’ve had a good balance of having your own space and then coming together, doing activities, stuff like that,” Khani said. She continued, “But so far, I’m very much going with the flow, and so far, the flow’s been good.” Meanwhile, Matt is surprised that he could survive this long with just one person. “It’s the longest I’ve ever spent nonstop with one person. This is like the equivalent of dating in dog years,” he said.

ALSO READ: This UK Couple Had Been Sailing All This While Totally Unaware Of The Coronavirus Pandemic Until Recently. This Sounds Like A Movie Plot.

So I dug a little deeper and found a sweet af video Matt made, recording their beautiful moments together. They’ve been seen goofing around and being completely relaxed in each other’s company. In a particular shot, he says to the camera that she is lucky to be quarantined with a guy like him. And she playfully snatches his phone and runs away and jokes on camera that people need to send help before he falls in love with her! They are swimming, playing card games, cooking together, and just building so many memories. I feel so so terribly single right now watching this video. She even got to cut his hair! That’s like a fantasy for most women! Why don’t they just get married? No pressure, Matt and Khani!

It seems like they are in a reality dating show, and definitely making the most of it. Refreshingly enough, this isn’t about falling in love or getting married once they are out of it. They are simply building memories and surviving a pandemic together. Whether things work out for them or not, they will never be able to forget each other. However, since the two have been living in hotels and Airbnb properties, they are running out of funds and trying to figure out how to work this out. Maybe Netflix should sponsor their journey and make a show out of it!

ALSO READ: Mouni Roy Has Been Stranded In The UAE For Two Months With Very Few Clothes. Bit Of Privileged Problem, Isn’t It?