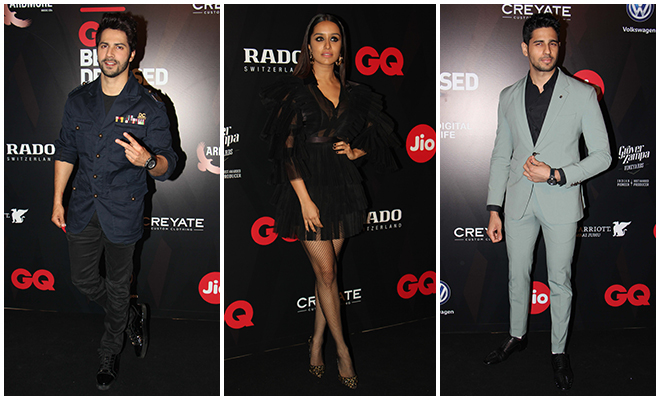 Did You Spot The Most Stylish Celebs At The GQ Best Dressed Awards?

This weekend, the most elite of the glam world walked the GQ red carpet of fame, at the Best Dress 2017 awards. While most chose to go safe with black, there was some element of surprise in their all-black silhouettes — Shraddha Kapoor didn’t just layer on her smokey eye makeup, but also layered her outfit with ruffles on her dress.

Talking about ruffles, did you see what Swara Bhaskar’s choice of footwear was? Her monochromatic powersuit looked great, but what were those feathers doing on her feet?!?

Adah Sharma, Radhika Apte, and Sayani Gupta were one of the few who probably didn’t get the monochrome memo, because they chose to go with a splash colour — and we’re loving that break!

Amongst the boys, Sidharth Malhotra looked absolutely sharp and snazzy in his suit, followed by Varun Dhawan, who kept it rather casual.

Oh, and how can we forget? Ishaan Khattar, Shahid Kapoor’s baby bro, was also spotted on this red carpet.

Scroll down to see your favourite celebrities at The GQ Best Dressed Awards 2017, and tell us in the comments below which ones made it to your most stylish list.

Rhea Chakraborty in a Forever New dress and Aldo shoes

Swara Bhaskar in an Ashish Soni suit and Karleo sandals