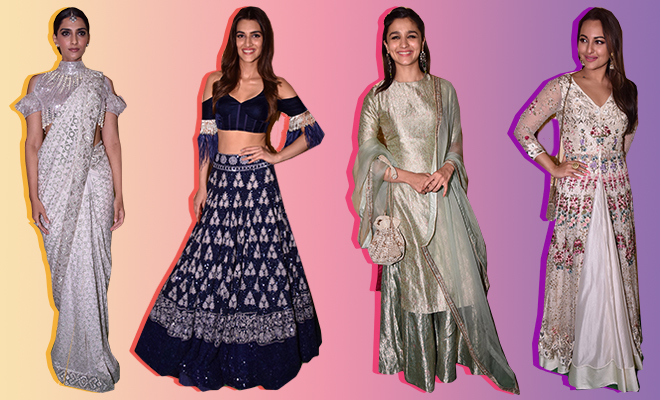 We’ve established by now that the festive season has dawned upon us. With Diwali just a day away, how can

We’ve established by now that the festive season has dawned upon us. With Diwali just a day away, how can Bollywood NOT celebrate this in the grandest way possible? And that’s precisely what Ekta Kapoor did!

Pretty much a red carpet event (barring the actual red carpet), the who’s who of Bollywood was present at this party. And let us tell you, they ALL dazzled away — the men included.

Spotted strutting their stuff in very starry-looking ensembles were peeps like Sonam Kapoor, who really looked like she brought the disco Diwali element along, Karan Johar was shining bright like a diamond, Alia Bhatt kept it simple but looked so adorable in her Indian attire, and Kriti Sanon simply stunned in a gorgeous blue lehenga!

Amongst those shiny ones, there were celebs like Arjun Kapoor, Mouni Roy, Karishma Tanna, Shilpa Shetty and Bipasha Basu — to name a few!

Clearly all of them were ready to party the evening away with the crème de la crème!

Want to know who we spotted at Ekta Kapoor’s Diwali bash? Scroll down to see who made it to the celebrations.