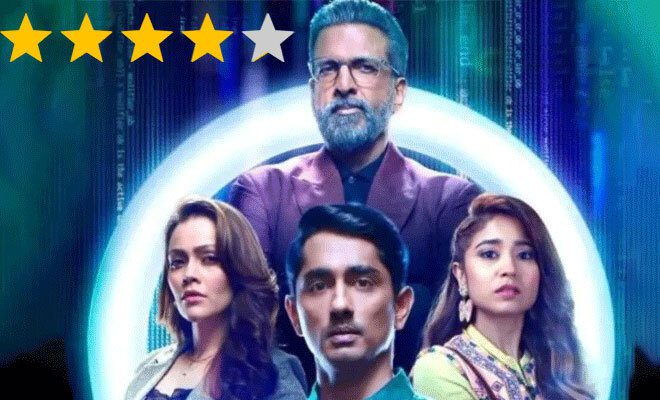 ‘Escaype Live’ Review: A Nail-Biting Thriller That Won’t Let You Escape The Dark Side Of Social Media And Realities Of Greed

Internet and social media have changed our lives in the past few years. With such easy access to the internet and all the social networking platforms, our social lives are beyond just physically meeting people. Moreover, this has given a platform to people to showcase their talent and grow in life and become influencers. A new science fiction thriller web series, Escaype Live deals with social media influencers and the horrors of human greed and the dark side of social media platforms that seem to be taking over our lives. It stars Siddharth, Jaaved Jaaferi, Waluscha De Sousa, Sumedh Mudgalkar, Plabita Borthakur, Rohit Chandel, Aadya Sharma, Shweta Tripathi, Ritvik Sahore and Swastika Mukherjee among others. Created and Directed by Siddharth Kumar Tewary, 7 episodes of this series was released on the OTT platform Disney+ Hotstar on May 20 and the final 2 episodes were aired on May 27. And knowing the theme of it, I couldn’t help but binge on it.

The Story Of Escaype Live

The story revolves around a video sharing app called Escaype Live. The app holds a contest for all the users to showcase their talent on the platform and win the maximum number of diamonds from their followers in order to win 3 Crore Rupees. Every diamond on the app is worth Rs 5 out of which the user gets 50% and the remaining 50% goes to the app. The series begins with Krishna Rangaswamy, played by Siddharth, a software engineer, starting a job at Escaype Live as a content moderator when he finds out all about the leading influencers on the platform namely Fetish Girl aka Hina, played by Plabita Borthakur, Dark Angel aka Darkie, played by Sumedh Mudgalkar, Dance Rani aka Rani Singh, played by Aadya Sharma, Aamcha Spider aka Nilesh Sonawane, played by Ritvik Sahore and Meena aka Rajkumar, played by Rohit Chandel. Krishna also meets his boss Gia, played by Waluscha De Sousa and the CEO/Owner of the app, Ravi played by Jaaved Jaaferi.

Escaype Live does not just follow the stories of these influencers as they grow and compete on the platform but it also follow their personal lives, struggles and how far they’re willing to go to win as well as their families and the kind of support (or lack of support) that they get from them. While Meena recieved help from an unlikely friend she finds in Sunaina, played by Shweta Tripathi, Fetish Girl aka Hina has struggles of her own as she tries to save herself from her boss’ wrong intentions as her family refuses to support her. On the other hand, Darkie seems to have a dark past with his real identity hidden as he goes on a chaotic journey to compete in the contest. Dance Rani seems to be going too far to grow up and achieve her dream of winning on the app as Aamcha Spider takes bigger risks every single day to win but what happens when these influencers are pitted against each other in a contest that is rigged? How far will they go to win and beat the other person for money and fame? And let’s not forget Krishna who juggles between his work, morals as well as his family problems.

Siddharth as Krishna Rangaswamy: Siddharth put his years of acting experience and skill on display for all of us to watch in this web series. The actor eased into his character and makes you feel all of his emotions while he dabbles in shades of grey that will make you love him one minute and hate him the other. He perfectly plays a stereotypical Indian man who feels that he can do no wrong but fails to stand by his sister. Krishna has shades of misogyny that Siddharth brought out in the most realistic manner. But the one thing missing in this character is the character arc.

Plabita Borthakur as Hina aka Fetish Girl: Plabita Borthakur beautifully portrays the role of a seductress who takes control of her own life and sexuality. While she seems to have a strong personality, there are parts where she is shown as a damsel in distress which doesn’t sit well with her personality. Her character seems to have some gaps and it could have been written better. Having said that, the actress leaves no stone unturned to play her part with utter perfection.

Sumedh Mudgalkar as Dark Angel aka Darkie: Sumedha delivered a stellar performance as Darkie who comes from a dark past and an identity that remains unknown for the most part of the show. But reliability was missing in this character, but it could be because the Darkie is someone who lacks emotions and empathy, making it difficult for one to like him or connect with him for that matter. Sumedh delivered exactly what his role demanded but IMHO, the role could have been written better and made to be a little more relatable. Moreover, his character’s backstory seems lacking and barely scratches the surface.

Aadya Sharma as Rani Singh aka Dance Rani: Child actor Aadya Sharma was totally the star of the show on Escaype Live as well as in the web series. She delivered an outstanding performance. It was delightful to watch Dance Rani go through all kinds of emotions as you sit in front of the screen and feel her pain and the anger for those who hurt her. The actor delivered a praiseworthy performance.

Shweta Tripathi as Sunaina: As much as we wished the actress had a meatier role in this series and more screen time, she managed to make the most of what she had and delivered a stellar performance as expected. Every emotion that Sunaina is clearly visible on her face and easy to gauge and feel. The best part is to see her pining for a man who is unavailable.

Ritvik Sahore as Nilesh Sonawane aka Aamcha Spider: Every time Aamcha Spider performed a stunt, it made me fear for his life and had me sitting on the edge of my seat. The character is very Mumbaiya but manages to carve a space in your heart. Ritvik’s acting is commendable. Nilesh Sonawane isn’t all rainbows and unicorns but is instead a more realistic person with dark shades and shades of grey.

Rohit Chandel as Rajkumar aka Meena: Rohit Chandel’s acting was the highlight of the entire series. The actor delivered a stellar performance as he portrayed the role of a man dealing with gender dysphoria. Rohit plays his role beautifully and does not look one bit uncomfortable in his character. He manages to switch between Rajkumar and Meena Kumari beautifully as he goes on a journey to accept his true gender identity and come out to his family.

Waluscha De Sousa as Gia: Gia is not your everyday boss lady but she is one with shades of grey. She has her heart in the right place but she crosses the line in order to climb the corporate ladder. Nothing new but the actress delivered a great performance and will make you hate her and love her at the same time.

Jaaved Jaaferi as Ravi: Jaaved’s screen time was shorter than we expected but his character did not bring much to the table apart from a heartless boss who is all about saving his work and business at the cost of others. But the actor did justice to his rather underdeveloped role.

The rest of the actors also did a commendable job. Hats off to the makers for the perfect casting in Escaype Live

The first thing to note is that every actor in Escaype Live deserves accolades for their natural and outstanding acting. While most characters were well written and had great character arcs, some seemed underdeveloped and couldn’t reach their full potential. This series has several sub-plots most of which are extremely predictable but it somehow still manages to keep one hooked and on the edge of their seats with the main plot. Another thing to note is that it not only has inclusivity but it also managed to deal with several taboo and sensitive topics while highlighting social issues and evils. But the one thing I couldn’t help noting was the fact that the show wasted a lot of potential in several subplots that could have been explored more but it could barely scratch the surface.

Also Read: ‘Nirmal Pathak Ki Ghar Wapsi’ Review: Touches On A Truckload Of Sensitive Issues, But Gives Little Time To Process Them All

The best thing about Escaype Live is that it ensures that you don’t escape the realities of life, social media and human nature. It aptly shows the horrors of human green and social media. It practically forces one to see the mirror. Having said that IMHO, there was nothing sci-fi about this series. The plot surely doesn’t justify the genre but considering the thrilling plots and impeccable acting, I will give it 4 out of 5 stars. I’d say go and watch it RN!