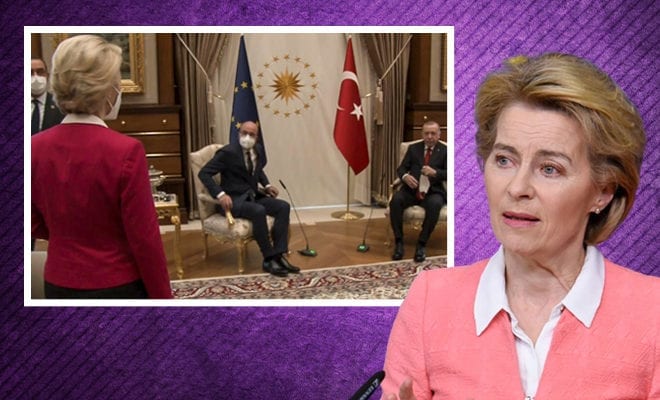 Woman EU Chief Says Sexism To Blame For The Turkey Chair Incident. It’s Because ‘I’m A Woman’, She Said

As sad as it maybe true, the thing about having a seat at the table with the big dogs is that it is ultimately of no use to you, unless you’re a man. You see, women may have fought tooth and nail to get to a point where they stand shoulder to shoulder with their male counterparts, but no matter how justified their place at the table may be, women are seldom ever taken seriously. Something that we witnessed when the European Union chief Ursula von der Leyen was left standing as her male counterpart was offered to be seated. This happened in Turkey.

The incident that took place during a summit in Turkey this month, on the 6th of April, showed how the European Union Chief Ursula was left standing as her fellow top EU Official took the only chair available next to Turkish President Recep Tayyip Erdogan.

A video that went viral clearly showed Charles Michel and Erdogan taking the chairs as Von der Leyen was made to stand looking at both the men, with astonishment and disappointment. The clip circulated on social media like wild fire, attracted a lot of flak from the netizens who were left unimpressed by the entire scene. And speaking about the matter, the first woman to head the European Commission Ms. von der Leyen herself, who openly said that the incident happened to her only because she was a woman.

“I felt hurt and left alone: as a woman and as a European"
“How far we still have to go before women are treated as equals.”
If @vonderleyen president of the EC is not getting a seat, what does it say about the rest of us? #sofagate #GiveHerASeat https://t.co/Stwihi5PDO

Also Read : Beauty Queen Stripped Off Crown After She Posts A Twerking Video On TikTok. What’s With The Sexism?

Opening up about it the incident in Turkey, Ursula shared, “Would this have happened if I had worn a suit and a tie?” Addressing the question to the European Parliament, she further stated, “In the pictures of previous meetings, I did not see any shortage of chairs. But then again, I did not see any woman in these pictures, either.”

“I felt hurt and left alone: as a woman and as a European,” said Ursula while adding how the oversight to provide her (supposedly an equal) was reflective of “how far we still have to go before women are treated as equals.” And although in the video, Ms. Von Der Leyen had seated herself on the sofa, because of lack of chairs, the sexism had been made pretty apparent already.

My visit to Turkey showed how far we still have to go before women are treated as equals. Always. Everywhere.

My story made headlines. But there are so many stories of women, most of them far more serious, that go unobserved.

We have to make sure these stories are also told!

Soon after the video went viral, so did the slogan #GiveHerASeat, wherein netizens questioned Mr. Michel  for his insensitivity and not offering Ursula a seat. In the speech that Ursula made, she further remarked how  she had not found “any justification for the way I was treated” based on European government documents. “So, I have to conclude, it happened because I am a woman,” she said, taking an open dig at the sexism still prevalent in the system.

It is shame to see that no matter how many times women prove their worth and mettle to the world, there will always be a part of them that would be looked down upon or not taken seriously. But, we are glad that at least women are not being silent spectators anymore, and are rather questioning the entire system.