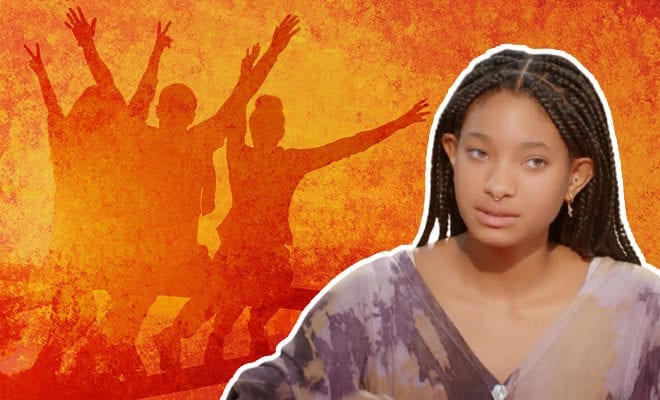 Will Smith’s Daughter Willow Says She’s Polyamorous, But Has Had The Least Sex Among Her Friends

Call it our social conditioning, societal pressure or just something we’ve adopted from those around us, but monogamy often feels more like a borrowed concept than it does like a chosen concept. We’ve all been conditioned to the idea of having only partner at a time, monogamy is the only way of life for most of us, but it’s not that way for all of us. We are talking about Will and Jada Smith’s daughter Willow Smith, who recently opened up about her sexual preferences.

In an appearance on the  American talk show ‘Red Table Talk‘ which she hosts alongside her mum Jada Pinkett-Smith and grandmother Adrienne Banfield-Norrison, the 20-year-old Willow Smith made quite a stir by a revelation that talked about monogamy and how she doesn’t identify herself with the concept.

Admitting to instead being polyamorous, Willow Smith shed light on why she chose to not limit herself to just one romantic partner at a time. “With polyamory, I feel like the main foundation is the freedom to be able to create a relationship style that works for you and not just stepping into monogamy because that’s what everyone around you says is the right thing to do.”

Also Read : This Trait Makes A Person More Desirable As A Long-Term Partner, According To A Study

She then went on to back her mindset with a tad bit of research as she said, “Also, doing research into polyamory,” she added, “the main reason why divorces happen is infidelity.” Having been interjected by her grandmother Adrienne who wondered if it ‘feels like it’s really all about sex’, Willow corrected her and said, “In my friend group, I’m the only polyamorous person, and I have the least sex out of all of my friends.”

She then said, “It’s about having the freedom to create a relationship for yourself.” And we’d be lying we didn’t understand where she was coming from. More often than not, concepts like these that are less talked about, are often left misinterpreted and dismissed by the people. It is only when you allow yourself to open up to the idea of things being in different ways than how we’ve always witnessed them, that you realise that there is more to world than what we’ve seen.

Willow explained it further by saying, “Let’s say you haven’t always been the person wanting sex all the time, but your partner is. Are you going to be the person to say, ‘Just because I don’t have these needs, you can’t have them either?'” That’s one of the reasons why I was interested in poly because I was introduced to it through kind of a nonsexual lens,” admitted Willow.