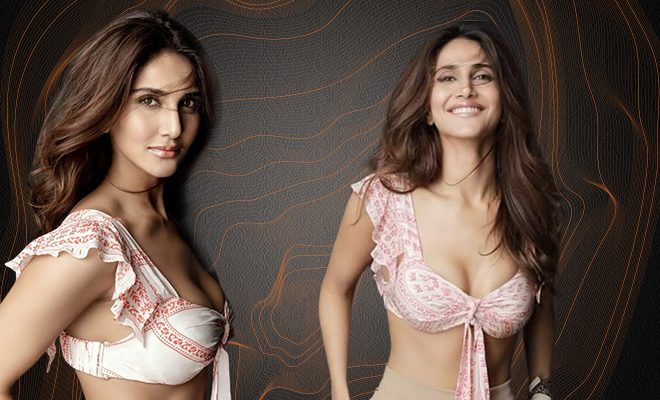 Vaani Kapoor’s Ram-Print Top Has Netizens Riled Up. Oh Come On, There’s Nothing Overtly Sexual About It

We live in a society that’s obsessed with religion and I say that at the risk of receiving a lot of flak for it. Why? Because for some people religion is above humanity and above your ethics and human rights. We will rant about democracy and the moment someone says or does anything that remotely disagrees with your faith, all that freedom and rights goes out of the window. These religion custodians forget what it means to live without having the right to control someone else’s harmless choices. What is it that these self-appointed custodians are raising a ruckus about at the moment? It’s Vaani Kapoor’s top (wow, out of all things that plague us, this must really require immediate attention!)

So the Befikre actress posted a picture on her social media posing in a plunging neck blouse with “Hare Ram” textual motifs on it. If I were her, I would have expected the country to go into a mad frenzy because I have lived here all my life and I know how seriously people take religion here. It took no time for her to start trending on Twitter because people went mad calling her all sorts of things (as if that’s in compliance with being spiritual).

A user wrote, “Wearing Lord Sri Raam’s name on the uncultured dresscode doesn’t give value to the actress Vani Kapoor @Vaaniofficial. This is hurting the sentiments of devotees of Lord Sri Raam. We uarge to removed such images from the site and value the devotees sentiments.#vaanikapoor (sic)” And I am glad this person wrote this because he brought to light the hypocrisy running in our very veins. Why is a blouse that flaunts your assets considered “uncultured”? If she had worn a Ram-print kurta, would this man praise her for being a believer? When will our society stop judging a woman by the amount of fabric covering her body?

Some people who claim to be all religious, also shamelessly disrespect women. A user said, “#vaanikapoor you do not have any respect for our hindu gods you should be sorry for this and shameless women, if you can’t respect hindu god, atleast don’t disrespect them. It is an idiotic ness (sic).” A majority of people in our country don’t believe in karma or care about doing good. They think chanting mantras and performing elaborate rituals are enough to make their Gods happy. But is it really about the rituals? Do you think Ram is actually affected by a woman wearing his name on a blouse? Or do you think it’s more offensive to shame her and snatch her freedom away? Strictly in terms of Karma, a lot of people do a lot more harm than wearing God’s name on a piece of clothing.

Wearing Lord Sri Raam's name on the uncultured dresscode doesn't give value to the actress Vani Kapoor @Vaaniofficial. This is hurting the sentiments of devotees of Lord Sri Raam. We uarge to removed such images from the site and value the devotees sentiments.#vaanikapoor https://t.co/v0jRJntB5w

Vaani Kapoor deleted the picture from her Instagram but netizens have been trying to boycott her. I mean, well, that’s kinda not happening so never mind. But some did try to make rational contributions to the discussion. “Not sure what is wrong. This actress #VaaniKapoor seems to be proudly wearing what she respects and possibly prays,” a user wrote. “@Vaaniofficial is hindu, she can wear her religion, she is using for aesthetics, not to disrespect. I am not her fan (I don’t watch movies usually), also I am a Hindu, and I support her because she is not disrespecting Hinduism. I also have one t shirt written Shri Ram on it,” said another.

ALSO READ: Anu Malik’s Tweet Addressing The #MeToo Allegations Is A Lame Attempt At Getting Off The Hook. Sona Mohapatra Isn’t Having Any Of It. Thank God!

And this brings me back to the question, who decides what is disrespectful and what is not? If you’re okay with someone wearing a Shri Ram kurta or tshirt, how is a blouse disrespectful? The plunging neckline is not making it look sexual, it’s the cheap mentality of people who look at women as if they are just sexual objects. I understand if some say that using holy elements as fashion is not cool. But again, you cannot prohibit people from doing it. Every person’s sentiments and beliefs are different and religion doesn’t teach you to attack someone who doesn’t follow yours.

Akshay Kumar Is Dressed In A Saree In A Still From Laxmmi Bomb. Will This Be Another Failed Attempt At Representing The LGBTQ Community?(Opens in a new browser tab)

Yami Gautam Says She Is Glad The Definition Of Beauty Is No Longer Limited To Fair Skin. It’s Funny She Should Say It!(Opens in a new browser tab)