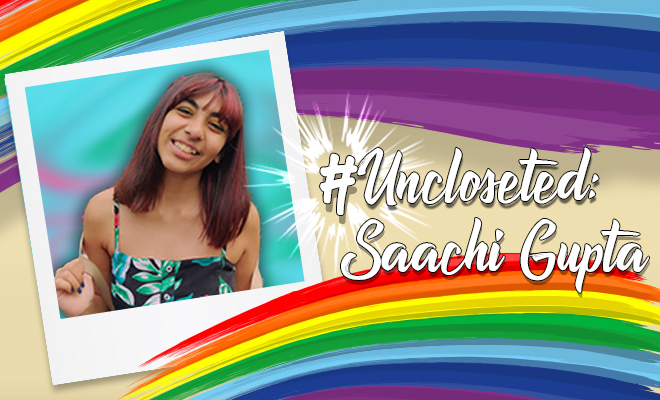 The year was 2015, I was in college and although I had had a sound and well-rounded education, when pop singer Miley Cyrus came out to the world as a pan-sexual, it was the first time that I was introduced to the term. Because I may know what an amoeba is but when faced with a real life situation, I was dumbfounded. So obviously, our education system has got it right. But it was perhaps then when I realised that there is lot more in life that I still don’t know about, but that it is never too late to start learning now, either.

Years later today, as I conversed with a young, confident and beautiful girl who also happens to be a pansexual, I may have known the term thanks to Google and Miley, but I was just as much in awe. In awe of the strength, the patience and the optimism with which she has navigated through her life, owning up to every fibre in her being and leaving quite a few lessons for us to learn along the way.

Meet Saachi Gupta, the 19-year-old who may or may not be certain about what she wants to do in life yet, but sure as hell certain about who she is going to be while she goes about figuring that bit out.

Also Read : #UnCloseted : Sushant Divgikr AKA Rani Ko-He-Nur Opens Up About Being A Drag Queen, His Journey And More

“I think I was about the age of 13 or 14 when I started figuring out that I wasn’t really straight when it comes to having a sexual orientation. At that time, I would often think that I am a bisexual, but it took me a couple of years to realise that I don’t really care about the gender of the person I am attracted to, it’s always been the personality. So, I started identifying as a pansexual, and I still do,” shared a confident Saachi. She may have been young, but she was resolute and that is striking.

“There wasn’t really one moment for me in which I knew, it was a feeling that was building up over the years. But yes, it was when I started falling for one of my best friends that pushed me to accept it. I did have trouble accepting it in the beginning, I would stay up at night thinking about it.”

Further, talking about how she was in denial in the beginning, she shared, “I stayed in denial for quite a while until the people around me started talking about the LGBTQ+ community as though it was normal. That helped me to accept it. Besides that, when I was in school I went to therapy for a couple of years and I remember this one session where I spoke to her about it, which only ended in us coming to the conclusion that I am straight, but that was only because I wasn’t ready then to accept it, as I am now. Eventually, I did accept it.”

Coming out to the parents

Having been pretty young when she was confused about her and her sense of belongingness, Saachi shared how her story of coming out wasn’t that big of a dramatic tale, but in fact a quiet and calm moment of feeling liberated and accepted. She said, “A month after I came to terms with where my sexual orientation lies, I was having dinner with my family at the table and I told them very calmly that I am possibly not straight. And it’s never really been a topic of conversation apart from when me and my sister, who is also not straight, trying to explain something to them concepts they’re not aware of. But the biggest relief has been that my parent’s reaction has always been great and supportive.”

“It did feel scary in the beginning, and there are times when it still feels confusing. Especially because I’ve mostly had girl crushes which makes me think I am just gay, but I am not because I do like boys. I think sexuality and gender are both very fluid and they both keep changing with time and experience. And that doesn’t have to be bad, because in a way it’s like you’re growing with who you are,” she added.

“What also has been heartwarming for me is that everyone around me has been very supportive and helpful in the process and I don’t remember having to struggle with this part of myself. And that honestly, is a blessing,” she concluded while speaking about her experience.

“I don’t think I’ve ever felt the need or the pressure to feel differently about myself and my sexuality because if at all I am not sure if someone is going to be accepting, I just don’t come out to them. I don’t have this urge to come out to everyone, unless someone follows me on social media and they already know.”

Opening about how she feels at times when she thinks of her future in our country, where even thought article 377 has been decriminalised, the taboos still exist, she shares, “There are days when I fast forward to moments imagining what if I want to marry a girl in the future and that since it is still not allowed in our country, what would happen then. And it just hits me in that moment, that things might not be easy. Also maybe because I’ve always been around such accepting people, it is only when I step out of that bubble, that reality hits me.”

“There was an exchange program that required me to go to Mexico for a year and honestly that has been life changing for me. I was scared before going, because I didn’t know what the country’s beliefs were about us in general and then to have to come out to people in a foreign land, it wasn’t easy. But I realised that my sexuality is not the only part of my identity, it is that I am also a writer, that I am a nice person, that helped me in establishing myself.”

Taking us through how she lives her life now, Saachi shares, “I have been a part of the desi queer community since I came out and I have been writing with the Gaysi community  for around 3 years now and I am very lucky that everyone has been very nice to me. Of course there still remain people who I haven’t come out to, including my own grandparents and a few of my friends and family but only because for me it is not a topic of debate. I just think if I end up marrying someone who is pansexual as me or different, then maybe that’s when I’d open up that point for discussion.”

When asked what message she would pass on to her younger and closeted self, she earnestly spoke about how, “A lot of the time people from the LGBTQ+ community miss out on experiences that are normal or that go very smoothly for people who are heterosexual. Be it falling in love for the first time or their first kiss or their first relationship. It is harder for people from the LGBTQ+ community to do any of that because it is harder to come to terms with it in the first place, so I’d just say that there is no need to feel disheartened when it doesn’t happen like that. It’s okay to stumble upon a partner late in life, it all works out.” And that is something we’d like to believe for ourselves, too.

With a view to share her ‘privilege of being surrounded by supporting people and growing up in a liberal city’, she wants to be there for people from the queer community who aren’t as lucky. She is the modern day equivalent of what change would be like, and with youth as empowered and strong-willed as her, we can tell that change is in the offing.

UNCLOSETED is Hauterfly’s stab at covering the coming out stories of people from the LGBTQ+ community. If you’ve a story you want to share, please email us at mansi@thehauterfly.com.

Also Read : #UnCloseted: Urzaan Patel’s Coming Out Story Had His Father Thinking ‘This Is Just A Phase’