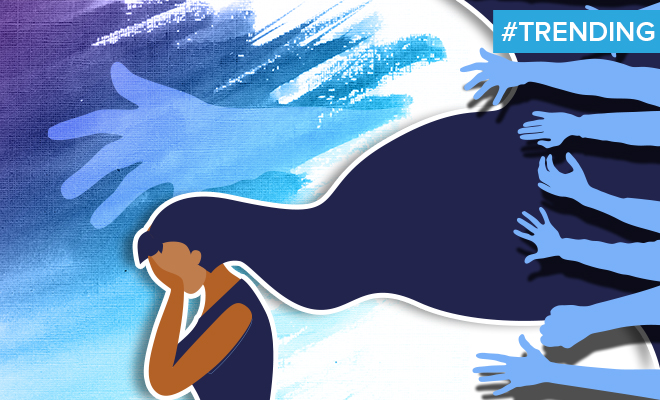 #Trending: Woman From Indore Who Fosters 40 Stray Dogs Claims That Locals And The Police Are Brutally Harassing, Threatening And Even Abusing Her.

Doing what I do, I have learned that no matter how hard we try, getting people to pay attention to women’s rights and sufferings, is an extremely difficult task. Of course, this doesn’t mean that we will give up.  If anything, it means we have to talk louder. You see, with the lack of female representation in all three branches of our government- legislation, executive and the judiciary, even today, it’s the men that are primarily making decisions for women and then enforcing those decisions. That leads to a lot of problems because, despite our best efforts, most Indian men remain apathetic towards women’s rights.

Every now and again we stumble upon an incident where a woman has been stripped of her dignity and not one person has come forward to help her. Even today, so many crimes against women go unreported. That’s because in most cases, there is severe victim-shaming involved at the hands of the people who are supposed to help. The authorities usually take the side of the men, the crime is swept under the rug and woman threatened into silence. Although, some women have the courage to keep fighting.

Recently, in a heart-breaking series of incidents, there is a video that is doing the rounds of social media that features a woman talking about the dreadful circumstances under which she is living.

For the past several months the woman, Sakshi Sharma from Indore, Madhya Pradesh is being brutally harassed by some locals living in her area, who run slaughterhouses. She is being mentally and physically tormented because she has sheltered around 40 stray dogs. It has also been conveyed through the video, that instead of helping her, the local police is only adding to this torment.

Narrating her horror she said, “For the last ten months, these people have been taking drugs right outside her house. They have made it difficult for me to step out of the house after 5 in the evening. When I reported the matter to the Tilak Nagar Police, they told me that it is happening because there is no male member in your family, you’re unmarried and there are dogs in your house.”

She added, “Police have been torturing and humiliating me so much. Despite that, I have been trying to settle down the situation for the past ten months, thinking that if I’ll leave from here then my 40 kids (dogs) will become homeless.”

So, a woman is only safe only if she a man by her side? That’s a pathetic and awful thought. Instead of propelling this ridiculous mentality, the police need to do their job.

In the video, Sakshi also said that around three or four months ago, the goons terrorizing her, broke her hand. And then too, the police did not do anything to help her.

She further alleged that the slaughterhouse goons cornered one of her dogs and murdered it. She said, “They broke its neck and all four legs and when I said that I would lodge an FIR after post-mortem tomorrow, the dog’s body disappeared… One of my babies has been killed and one is missing. I don’t even know if she is alive or dead.”

Okay, my faith in humanity is shaking. They murdered a dog, kidnapped another one, broke a woman’s hand, assaulted her and threatened her all to get her to give up the 40 dogs she takes care of on her own? We have reached a whole new low.

In the video, she further said that she has been visiting the Tilak Nagar Police Station for a few days now but they have flat out refused to lodge her complaint. She said, “The inspector has clearly refused to register a complaint in this regard. I have been continuously receiving death threats. I have been told that the two dogs that have died, have died, save others.”

Sakshi has accused the police of being involved in the sale of drugs and also running illegal slaughterhouses in the area. Of course, at the moment, we have no proof of any of this. She also said that the police and locals are threatening her to vacate her house. She said, “In the last ten months while struggling to save the dogs, the locals have allegedly attempted to sexually and physically abuse me.”

Sakshi Sharma, reportedly an animal activist from Indore’s Tilak Nagar has alleged harassment by cops and locals in a nine-minute long video that she published on social media on July 25. pic.twitter.com/591oEs4vim

She further mentions that she has been abused “verbally” and “socially” and now she is so scared that she is going to meet the same fate as the dog those monsters murdered that she sleeps with a knife under her pillow. The police have done a fabulous job of adding more pain to someone who is already being so brutally harassed. Who needs criminals when you have policemen like that?

Sakshi says, “According to Tilak Nagar Police, I should get married and have kids. I have committed a big crime by sheltering these 40 dogs here…. I don’t want to get killed in the same brutal manner as they killed my baby. Around five minutes back, ten men threatened me with murder.” Further adding, “What will happen to my 40 kids, if something happens to me? I feel like committing suicide. Tilak Nagar Police is pressurising me to commit suicide.”

She said that when she calls the police, the cop on the other end told her that somebody will murder her and bury her inside that house and no one will even know about it or come looking.

“I am literally broken. Tilak Nagar police are very bad. They earn money through murders, drugs, encroachment and animal trafficking. And, if somebody highlights it, then make the person’s survival difficult. I have no other option than committing suicide. I cannot watch my dogs dying in front of my eyes as I have sacrificed my career, reputation and self-respect for them.” Sakshi said.

Also Read: Another Day, Another Incident Of Men Abusing Their Power. A Woman At The Delhi Airport Has Accused Her Managers Of Sexual Harassment

Everything this woman has been through is terrifying. Although, I have tremendous respect for her considering that even after all this, she has stuck to her guns. She is not moving away because she is concerned about her dogs rather than her life. It’s extremely unfortunate that not one person wants to step up and help her out.

In response to her video though, the police have released their own video denying all these claims. They are accusing her of being a con and making all this up for donations and monetary assistance. Like I said before, we have no proof to decide which side is telling the truth. All we know is that it’s her word against theirs and she needs to be given a fair chance and her story needs to be heard.

The 9-minute video that Sakshi made seemed like a serious cry for help, we can’t ignore that.

This Japanese Woman Was Harassed And Molested In Rishikesh. So Much For Atithi Devo Bhava.