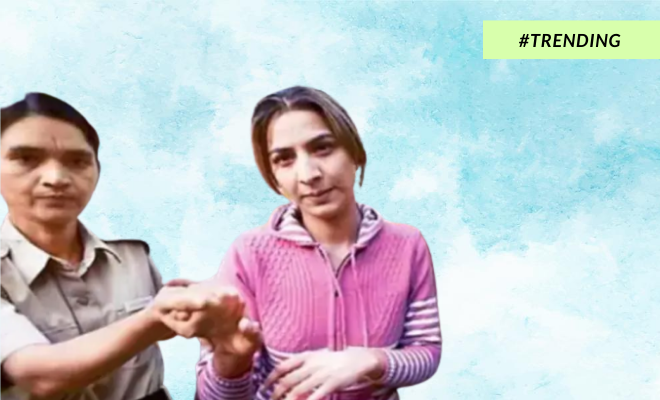 #Trending : Sonu Punjaban, The Sex Racketeer, Trafficked A Minor Girl And Rubbed Chilli Powder On Her Private Parts. This Is Disgusting

Back when I was still a student, learning new things and getting acquainted with all the ways in which the world works, from behind the safety net of parents, family and friends, the world visibly seemed a much kinder and happier place to be a part of. It wasn’t until a few years ago, when I tumbled out of the protective shell of my family, that I began to see the world for what it really is – a dark mess of the human sins, that has extracted the humanity out of us. And once where we blamed men for corrupting and exploiting women, seems like the women have too caught up in the race of being heartless monsters.

We are talking about the woman named Geeta Arora alias Sonu Punjaban, the notorious mastermind behind the flesh trade across northern India who acquainted us with the dark side of human trafficking, at the hands of a woman no less. Starting out in 2000, her modus operandi was that she would employ aspiring models who she would then send to attend to her high profile clients – namely politicians, dreaded gangsters and businessmen all over Delhi, Rajasthan and Punjab.

And while this is not the first time that she has made the headlines for her infamous acts, this time the woman has been convicted for a crime that will send chills down your body. Having been convicted several times earlier, on charges of trafficking, this one went beyond just being involved in the buying and selling of a minor girl for purposes of prostitution.

Also Read : In Madhya Pradesh, Four Men Gang Raped A Woman In Front Of Her Husband And Stole Thousands From Them. This Is Horrifying.

Sonu Punjaban was also found guilty of rubbing spice powder on the breasts of the little girl, to make her succumb to the pain, so much so that she surrenders and obeys everything that was being asked of her. Crossing all lines of humanity and brutality, even the judicial system noted that, “Punjaban crossed all the limits to be called a woman.” The Delhi court has now sentenced her to 24 more years in jail for ‘immoral trafficking’, which would keep her behind bars for good this time.

The court also observed that any person who commits such, ‘horrific and terrible acts’ should be devoid of the right to live in a civilized society’. And we couldn’t agree more to that verdict. As per the claims of the prosecution, it has been brought to light that Punjaban’s associate, Sandeep Bedwel who has also been imprisoned for 20 years, had abducted the minor girl under the pretext of marriage and later raped her. The girl was then sold over 4 times, after which she managed to flee from the captors.

And the fact the all the time she spent being sexually harassed and tortured in ways that would stump the human soul, we are disgusted to know that the one orchestrating such trauma on the girl was a woman herself. The court further observed that Punjaban’s “shameful deed” deprived her on any leniency from the country’s judiciary and if not satisfied, we are at the least not disappointed by the strictness the court has shown towards a monster like her.

Let’s hope there are no more of her kind.

Also Read : #Trending: An FIR Has Been Lodged Against Two Instagram Users Who Threatened Rhea Chakroborty With Rape And Murder. We Are Glad To See Action Being Taken