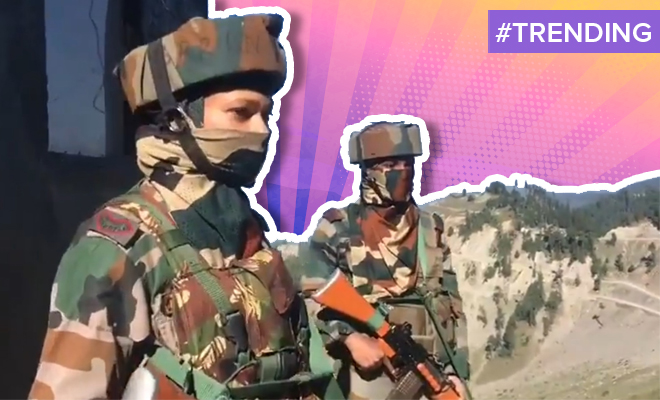 #Trending : Rifle Women Have Been Posted In Areas Near The LoC For The First Time In The History Of Indian Army

We say this after we found out that for the first time in the history of the Indian army, ‘Rifle women’ have been deployed along the Line of Control (LoC), between India and Pakistan on the national security day. Up until now, women had never been deployed here with their male counterparts, but with this step, as they are posted to areas adjacent to the LoC, we know it is a moment to commemorate for all of womankind.

Posted under extreme conditions, of being stationed at  an altitude of ten thousand feet, at the top of the Sadhana Top of the LoC, nearly half a dozen ‘rifle women’ led by a woman officer of the Indian Army, these brave women are going to be guarding the road that goes up to the LoC. And just the fact that women are now being commissioned into places and posts that were earlier only reserved for men, proves that women are indeed neck to neck with men.

In a first, ‘Rifle Women’ of Assam Rifles deployed on LoC dutyhttps://t.co/jO8F7QhdFJ

Reports share that the ‘Rifle women’, are part of the Assam Rifles which has been the oldest parliamentary force of the country and had been entrusted with the safekeeping of the area around the LoC and the national border. The women soldiers are said to have entered the Indian Army from the Assam Rifles on deputation. Their role would be to check for smuggling of narcotics, fake currency, weapons across the border, all the while making sure there is no infiltration from Pakistan across the Sadhana Pass.

Great! Really feel proud to see the
Rifle women at line of control LoC of India-Pak border in UT of Jammu & Kashmir. I Salute these Brave Women. https://t.co/91iUlZBK7o

The idea of deploying women in these areas was also because a lot of the vehicles that pass through the Sadhana Pass have women passengers, which makes it difficult for the army personnel to carry out a thorough search. With this change, it won’t just allow them to be thorough in their ways, but also pave a new way for women soldiers.

A statement also shared how this move makes a way for “empowering women officers to shoulder larger roles” in the Army.

Also Read : #Inspiration: An All-Women Police Patrol Unit Has Been Flagged off In Noida To Ensure Women’s Safety In Public Places. What A Great Move!