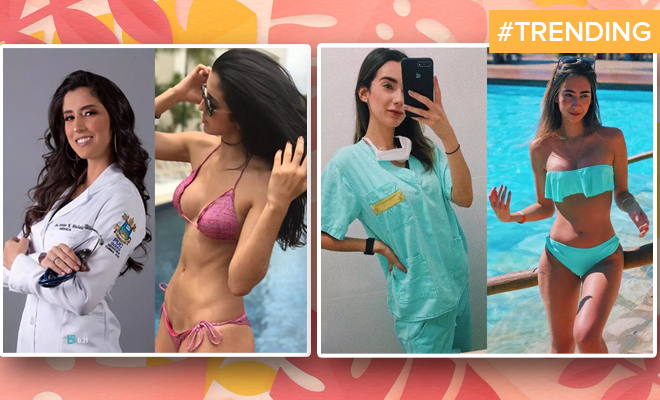 #Trending: Female Medical Professionals Are Posting Bikini Pictures To Protest Against A Sexist Study That Says It’s Unprofessional For Them To Post Bikini Photos.

I am starting to learn that sexism and gender-biases exist everywhere, you just have to look close enough. The thing is, people, believe that they have some undue control over women and our choices. What we wear, how we sit, who we speak to and how, whether we drink or smoke, what pictures we upload on social media- everything is subject to scrutiny. Have you never wondered why men are not pulled up for the same reasons women are? Sexism is all around us and if you thought it was just India who doesn’t allow women to be themselves, think again.

Now, the reason I am talking about this again is that women doctors, mainly in the USA, are retaliating against a sexist study that was published (very slyly) a few months ago. No one noticed it then, but now the study and its authors are garnering a lot of hate and for good reason too.

The paper, “Prevalence of unprofessional social media content among young vascular surgeons”,  published online behind a paywall on December 25, 2019, in the Journal of Vascular Surgery. This study called female doctors “provocative,” “unprofessional,” and “inappropriate” for posting bikini photos on their social media. Now you see why it’s causing such a stir on social media? Also, why can’t female doctors wear what they want on their own time and post what they want on their social media accounts? Sometimes, I am shocked at the kind of shit that comes up in the name of gender bias.

Anyway, the researchers looked at the social media accounts of 480 recent vascular-surgery graduates between 2016 and 2018. How did they do this? Oh, here’s where it gets worse. The researchers created fake profiles to stalk all the female doctors. They then concluded that 61 out of the 235 medical residents they studied had “unprofessional or potentially unprofessional content”.

Now, I am sure the question you are asking is why? What was the aim of this sexist study? Well, the study suggested that a lot of patients choose their hospitals and doctors, partly, based on how professional their publicly available social media accounts are.

So this study was published shaming physicians for being “unprofessional” by wearing bikinis or holding a beer in a photo? And the study was conducted by 3 men who created fake social media accounts to spy on applicants?

Okay, if that was their point then fair enough but why are they targeting only women doctors who post pictures in bikinis and Halloween costumes? Are men doctors who post shirtless pictures with a beer not being equally unprofessional then? Also, why did they have to make fake accounts? That’s creepy.

Though this study was posted in December, it was only made available to the public this week. And since it was released, it has been garnering huge waves of social media backlash for its sexist nature. And we are loving it.

In retaliation, female doctors are posting pictures of themselves in bikini’, looking gorgeous BTW, with their credentials. This gained traction very quickly and #Medbikini started floating around social media. Some have even started posting pictures of their work attire alongside photos of them in bikinis relaxing and having fun.

Also Read: In Myanmar, A Female Doctor’s Medical Licence Got Revoked For Being Too Sexy On Social Media. WTF Even?

Take a look at some of our favourite ones:

59-year-old Emergency Doc–not quite a bikini but it will have to do. I can still save your life and beat you in arm wrestling. #MedBikini pic.twitter.com/S3qEUZPX0A

#MedTwitter, do you know what’s unprofessional? Misogyny and sexism.

Do you know what not unprofessional? Enjoying yourself, knowing how to relax and owning your body.

Here I am in a cold waterfall. Placement clothing wouldn’t be very appropriate here.#MedBikini #BodyPositivity pic.twitter.com/iRj9AKHMV8

I’m excellent at my job, I’m a professional. I’m a doctor. I’m a human. I’m VERY sexually active. If you have a problem with that, there’s the fucking door. Nobody tells me what I can/can’t wear since I’m in healthcare, like this see-through set I’m wearing #MedBikini #medbikini pic.twitter.com/AAq9f5bwIb

Also deemed unprofessional, profanity & political talk but these dudes can fuck off b/c health care should be free at the point of care. https://t.co/Lk99jCRdrD

It breaks my heart, but this just shows a peak behind the curtain at how behind and backwards the culture in medicine is. Here's a picture of me after finishing my leading Research Thesis on Emergency Vehicle Trauma. Doctors are people too #MedBikini pic.twitter.com/A4zrSYEFNo

I am a woman in medicine who loves to travel to tropical locations and dress accordingly. I will not wear my white coat and scrubs to Hawaii. This does not make me unprofessional or less intelligent or compassionate compared to my male colleagues. #medbikini #girlmedtwitter pic.twitter.com/RmCQBnUme6

#MedBikini what I wear on my day off or under my scrubs doesn’t change my ability to do my job. I’m a person first. I’m a wife, mother, daughter, sister, and friend who just happens to be a Dr. pic.twitter.com/SdqFJ6f53q

After receiving all this backlash and hate, the author of the paper, Dr. Jeff Siracuse, issued an apology tweet for how the paper was framed.

He said, “Our intent was to empower surgeons to be aware and then personally decide what may be easily available for our patients and colleagues to see about us social media,” Siracuse added, “However, this was clearly not the result. We realize that the definition of professionalism is rapidly changing in medicine and that we need to support our trainees and surgeons as our society changes without the appearance of judgment.”

I don’t understand how women doctors, (ugh, I hate that phrase) wearing bikinis on their own time and posting photos on their social media accounts is unprofessional? Can’t they have a life outside work? Besides, we are living in pandemic times. Is it really the best time to criticize the very people we owe our lives to? On one hand, we are thanking them every day and on the other people are shaming them for what they post on their personal social media accounts. Tell me that doesn’t piss you off.

Having said that, I am tripping over the way the doctors slammed this paper. It was, in every sense of the word, epic.

#Trending: Star Japanese Tennis Player Naomi Osaka Gets Trolled For Posting A Picture Wearing A Bikini. Apparently, She Should Maintain Her Innocence