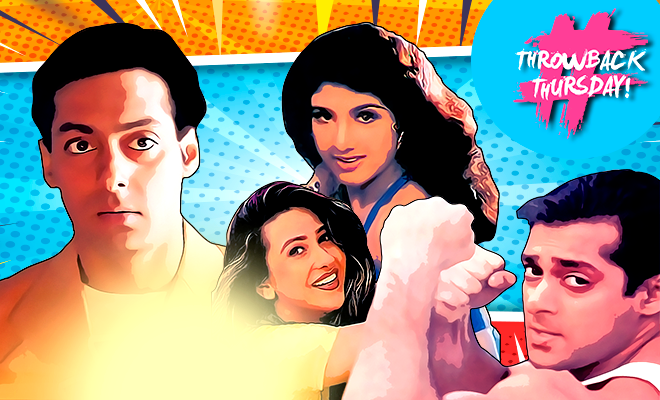 Throwback Thursday: Judwaa Was Dismissive Of Consent, Stupid About Twin Relationships And A Sexist Piece Of Trash

As 90s kids, we’ve grown up watching and thoroughly enjoying comedies that used sexism as a humour tactic. Of course, back then we were naïve and we didn’t know any better. David Dhawan was one of the leaders of this kind of comedy and through movies like Biwi no. 1, Judwaa and more, he reduced women to bumbling idiots. It was terrible enough in 90s but he decided to bring the sexism back with Judwaa 2 and now that we are woke, we realised that this and the OG film were so bad at several levels.

Judwaa is about Salman Khan as Raja and Prem, with a sprinkle of Karisma Kapoor (Mala) and Rambha (Roopa) as side dishes. Their sole contribution to the film is creating a little bit of chaos by getting thoroughly confused as their lovers get exchanged. That and dancing around the trees because Bollywood movies are supposed to be musicals.

Roopa’s mother has one goal in life and that is to trap a rich dude for her to marry. At that point, Prem seems like a viable option because he lives in the US and is apparently a rockstar but has the personality of a pigeon. I am sorry pigeons, I know that is offensive. He doesn’t seem to have any decision-making ability and agrees to whatever he is asked to do. The only skill he has is to chug down glasses of umm, milk. In a particular sequence, he gets drunk on milk because Raja somewhere is chugging down alcohol and they are supposed to be connected that way. In those drunken moments, he even hits on Roopa’s mother. It’s cute how they can justify a man not being able to keep it in his pants by simply blaming it on alcohol. Which in this case, he has not even had.

Raja, the other twin is a thief with a soft heart. He has several skills listed on his resume – from escaping the jail to farting publicly and adjusting his balls, also publicly. But the most mind-blowing skill he has is slapping Mala’s derriere each time it comes in his vision. They’ve shown it like it’s an uncontrollable physical action, which is an insult to everything women and medical conditions. Again, they think it’s funny but it only justifies sexual assault and violation of consent. But Mala is shown as rather stupid who falls in love with this perverse man and finds nothing wrong with his creepy behaviour. No, real women aren’t like that and we definitely do not enjoy being groped.

This movie shouldn’t have been re-made. Wait, it shouldn’t have been made at all. Comedies can be made without pulling women down and casual sexism, like we have Good Newwz and Bareilly ki Barfi. Let’s grow up and take responsibility. Also, dear David Dhawan, please no more remakes.

ALSO READ: Throwback Thursday: In Biwi No 1, Prem Is A Chauvinistic Pig Who Should’ve Been Kicked Out By Both Pooja And Rupali