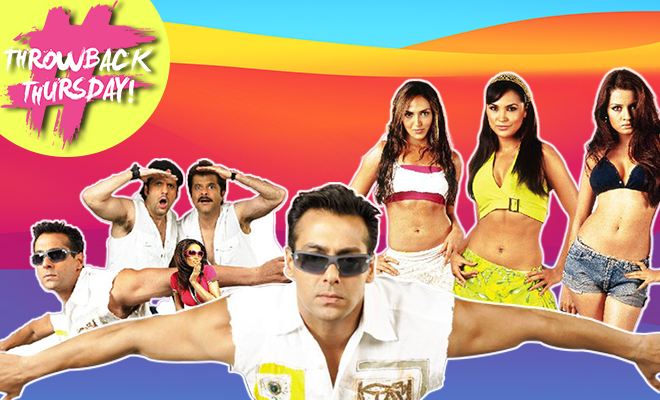 I love watching movies. But while a lot of people in our country look at cinema as mere entertainment and glamour, I see it as art. Yes, there’s a science to it, but it’s not a code that’s programmed and creates a series of audio-visual experiences. Movies and web series thrive on the creative pool that works on them. So it definitely is art, and art should be responsible, at least that’s what I believe. Whether Bollywood is inspired from reality or it influences real people is an ongoing debate but what is for sure is that it talks about the kind of mindset that’s prevalent in that era. Why am I talking about Bollywood and how it portrays our culture? Because I have been reviewing movies and songs from the past on Thursdays and each time I realise how some movies have been utterly sexist. Today, let’s talk about No Entry starring Salman Khan, Anil Kapoor, Fardeen Khan, Esha Deol, Lara Dutta, Celina Jaitly and Bipasha Basu.

No Entry is about trivialising infidelity and that too in a very sexist way. How? Because it shows that men can cheat but women are supposed to be sati savitris. You know how fishes swim, birds fly, men cheat. The approach of the movie is that casual. In fact, Prem (Salman Khan) at some point justifies cheating by saying that because men are so sensitive, they cheat, feel guilty and give their wives even more affection. I mean, wtf? He even goes on to compare women with cars and how men can get bored driving the same car so it’s okay for them to once in a while try out new ones. Well, someone tell him that women can drive too.

In fact, at the end when Prem’s wife forgives him for cheating on her, he says if she would have done the same he wouldn’t have forgiven her. I mean, yes he says it shamelessly – after emotionally manipulating her to forgive him for his sleazy ways.

When it comes to No Entry, I really wish the sexism was restricted to infidelity. But it ran through the veins of the movie. Every woman character was so stereotypical and poorly defined. A jealous wife, a pati-vrata wife, a very angry wife and a homebreaker – and yet all these women had one thing in common – a complete and utter lack of intelligence or personality. Sanjana (Celina Jaitly) falls in love with a guy because he was going to commit suicide for his ex-girlfriend. Pooja (Esha Deol) believes whatever Prem says and Kaajal (Lara Dutta)is more superstitious than your daadi. With the women acting all dumb, it felt like they were taking us all down with their poor representation of us.

ALSO READ: Throwback Thursday: In Biwi No 1, Prem Is A Chauvinistic Pig Who Should’ve Been Kicked Out By Both Pooja And Rupali

ALSO READ: Throwback Thursday: This Song From Govinda And Karisma Kapoor’s Raja Babu Is All About Harassment And Obscene Pelvic Thrusts