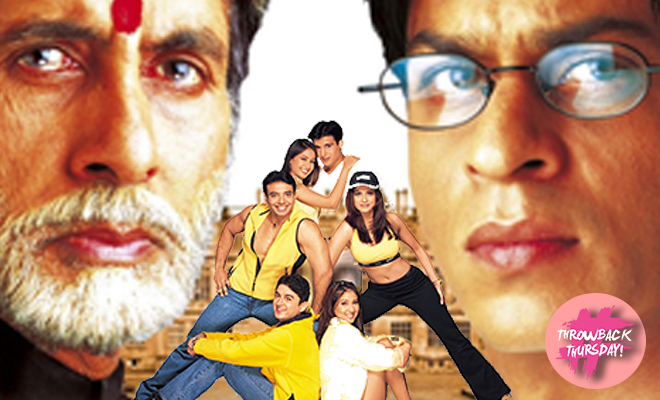 Throwback Thursday: Mohabbatein Is Full Of Egoistic, Dumb And Sexist Men Who Keep Wanting The Women To Change

First cousins Aditya Chopra and Karan Johar have similar sensibilities when it comes to filmmaking. Both like to place utterly tacky characters in scenic, fancy locales. Every frame in their films is extravagant which seems like a good distraction from the lack of personality in some of their leads. Oh wait, in all of their leads. For instance, directed by Aditya Chopra, Mohabbatein’s Gurukul which is supposed to be a college in a small hill station in India, was a set erected in England. I don’t see why they couldn’t do some good for their own country’s economy but I see them as those couples who will not in their worse dreams plan their honeymoon in India because that’s so middle-class.

Now Gurukul looks like a wanna-be Hogwarts but for rather unskilled fucktards who can be manipulated with absolutely no effort. Gurukul is spearheaded by Narayan Shankar (Amitabh Bachchan) who is also the president of the anti-love communist party. What seems like an orientation program turns out to be a monologue of terror unleashed upon unsuspecting students as he goes on to threaten them with rustication for not following all the rules. Of course, the number one is not falling in love. I have no idea what kind of school dictates that you’re not allowed to have feelings for someone, but I am going to let that go.

While all other guys have accepted a life of masturbation, three chomus are still entrapped by their raging hormones. Vicky (Uday Chopra), Karan (Jimmy Shergil) and Sameer (Jugal Hansraj) bump into three different women and fall for them. Vicky catches Ishika (Shamita Shetty), a student from the neighbouring girls’ college who he catches while she is stealing and that’s somehow attractive. Karan witnesses a very scary, ghost-like Kiran standing at a railway station – not on the platform but the side that opens into the woods. She is dressed like a bride, with sindoor and all that. And somehow that makes Karan fall for this very obviously married woman if she’s alive. Sameer bumps into his really dumb childhood friend Sanjana (Kim Sharma) who actually talks in an ultrasonic Doraemon voice, so at least the Malaysian government must be happy. Also, I just wanted to drop in the fact that Sanjana the princess doesn’t know that dedh (1.5) is lesser than dhai (2.5).

So according to the movie, a girl who is feminine and pretty has to be stupid. A woman who is married has to dress in traditional clothes and carry the flag of sanskaars. An athletic woman has to have no feminine bone in her body. Also, please note that both Vicky and Sameer have asked their love interests to cover up, baptising them into becoming girlfriend/wife material.

Bring in Raj (Shah Rukh Khan), the dramatic violin player whose charming personality leads to Narayan introducing special music classes on campus and Raj gets to be the teacher. However, teaching music is not really his motive. This is the guy who will single-handedly sabotage his students’ education just because he has a bone to pick with Narayan. Turns out, he too was a Gurukul guy before he got fired for falling in love with Narayan’s only daughter Megha (Aishwarya Rai Bachchan), who then committed suicide. Meanwhile, Narayan doesn’t know him by his face.

Of course, they have tried to tug at your heart strings with Megha’s suicide when it was really the most unnecessary thing in the film. But whatever, Raj and Megha are still together because death can’t do them apart as he continues to see her everywhere. Puff, puff, pass, Raj?

Raj finds his bakras in these three dumbfucks who would rather go titty-hunting than studying and would happily get expelled. He encourages them to break rules and pursue their crushes, who aren’t really great in the first place. For a moment, you think why they have such low standards. But then you look at their profiles and you realise they kinda suit each other. Vicky blackmails Ishika into going on a date with her, Karan stalks Kiran and takes advantage of a vulnerable girl and Sameer is really cute. He is okay but his choice is really dumb.

There’s a Holi sequence in which Vicky inappropriately touches Ishika and basically is a creep. A few more songs later, the women have fallen in love with these chomus. At some point, Narayan also finds out Raj’s truth but he wants him to fail in proving that love is everything.

ALSO READ: Throwback Thursday: Raja Hindustani Is About A Sexist Man Who Needs His Woman To Bow Down To Him And That Hasn’t Changed 24 Years Later

The lovebirds keep meeting and even after several warnings. So finally, Narayan decides to expel them but ends up having a change of heart and realises that it’s useless expecting young blood to let their weiner rust. That’s not gonna happen. In the end, everyone makes peace and the ghost of Megha is now accessible to Narayan too. It seems like Raj did share his stuff after all.