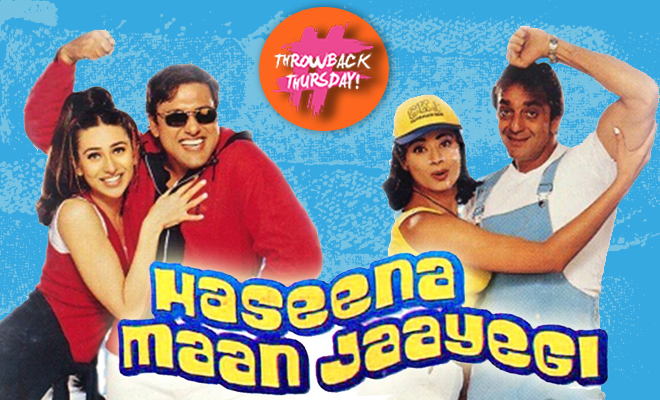 I watched Haseena Maan Jaayegi when I was a little girl. At eight years of age, all I could see was the hilarious dialogue delivery by some of the best comedians like Kader Khan and Satish Kaushik. Even the lead actors, Sanjay Dutt, Govinda, Pooja Batra, and Karisma Kapoor apparently pulled off hilarious acts…or so I thought back then. All that chase and drama, the way these guys troubled their dad – it was supposed to induce laughter, so I laughed. And now that I watched the film again, I realised that the film promotes gundagardi, violation of consent, and privilege.

This time, I realised that these men weren’t heroes but they were anti-heroes, even though the film desperately tried to redeem them by showing them as saviours in the climax. You know when they fight the criminals off and save their dad, his PA, and their FIL. How else would you show that two guys who can’t earn a single penny or live a life of honesty are actually the protagonists? Here’s what was totally wrong with the film.

Lack of morals as mischief

Right at the start of the film, Sonu (Sanjay Dutt) and Monu (Govinda) are shown as legit thieves. From stealing someone’s wallet to posing as gangsters and stealing 20 lakhs from their own father – they don’t see this as a big deal. In fact, at some point, they answered a matrimony ad for an older woman, took their dad ka rishta, and got a lakh as advance dowry. First of all, dowry. Secondly, when did it become funny to con people and play with someone’s feelings and dignity? After all their failed heists, they are surviving on the pocket money they get from their dad and wondering how they will divide all the wealth they will inherit from their father. How about get a job or join the business?

Violation of consent and sexual misdemeanour

The brother duo isn’t just useless but also the kind of men who misbehave with women. Monu, out of boredom, calls a girl’s hostel and speaks to a random Ritu Verma (Karisma Kapoor) and tries to make lewd conversations. His tharak knows no limit when he figures that Ritu is actually a beautiful woman and makes sure he does anything to make her fall for him. Now he knows his personality is shit, so he pretends to be blind and watches her undress and change, while she is oblivious to the fact that he can see. He outraged the modesty of a woman and that is romantic?

Meanwhile, Sonu, the senior predator is setting the example by abducting the woman he likes, Pooja (Pooja Batra) on a horse. After that, he forcefully kisses her. Funny thing, they have shown that she actually gets impressed by this. Later, he is seen advising Monu to do the same. Now after that fails and lands him in jail (because it is criminal, not romantic!) after dancing around in the song I Love You Bol Daal, the duo actually makes Ritu agree at knifepoint. Erm, which hero does that?

Promoting ‘men will be men’ mindset

The founders of the liars club are shown as mere mischievous young men who are just having some fun. They have lied time and again – and nobody seems to have a problem with that. Monu pretended to be blind. They fooled a woman into giving them dahej. They even faked a chachaji and broke Santoji’s heart (Pooja and Ritu’s bua). Each time, their lies have been trivialised. In fact, they get praised for it. Like it’s okay, young men are supposed to be naughty. What about sexual misconduct? The stalker behaviour? Okay, I guess men are allowed everything.

Firstly, who are these dumb women who get impressed by men who legit abduct them and forcefully kiss them? Secondly, their father (Anupam Kher) surprised me further. Pooja is trying to convince him to let her marry the gunda who ravaged through their home. How? She tells her dad that he has her love letters and explicit photos that he clicked while she wasn’t looking. Now any father would tell his daughter to not marry a guy like that and do a police complaint instead. This guy, on finding out how rich he is, decides this is the best guy for his daughter. Is he selling livestock here? Monu disguised as chachaji tells the unmarried bua, “Agar tu khandani hoti to iss umar mein ghar nahi baithi hoti (if you were a cultured woman, you wouldn’t have been single at this age).” What?

I seriously wonder, how did anybody think that all this is okay? Even the lyrics of the songs in the film are so shameful. Kab tak ruthegi, cheekegi, chillaayegi? I love you bol daal? This is what objectification of women looks like. But it’s a shame that the women themselves were okay with it.

ALSO READ: Throwback Thursday: Aamdani Atthani Kharcha Rupaiya Was A Movie About Beating Up And Humiliating Your Wife. And It Was Supposed To Be Funny