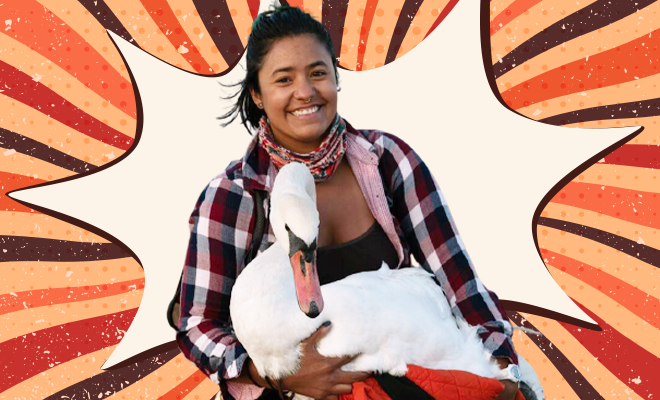 This Woman Hiked For A Mile, Took A Subway Train And Two Car Rides To Save An Ailing Swan She Found At A Refuge. On Her Birthday!

Considering most of us spent our birthdays this year in kind of a limbo, where the maximum thrill we obtained was either out of baking a half burnt cake for ourselves or hopping on a zoom call with connectivity issues, there is different level of expectation that we’ve all set for our next birthday. For me it is to travel anywhere that will get me out of the city, for my friends it is too party till they pass out and for a woman in The United States, it was to ride her bike to Jamaica Bay Wildlife Refuge in Queens and watch birds fly overhead as she would hike midst the picturesque surroundings. Except, what unraveled was something completely different. And involved a swan.

Having arrived at the Jamaica Bay Wildlife Refuge in Queens on Thursday, Ariel Cordova-Rojas was all set to bring in her 30th birthday staying close to nature, when she spotted an injured swan, which appeared to be sick. With an instinct to help out the poor bird, as Ariel came nearer to the bird for a closer look, she realised that the bird, who was a mute swan, did not make a single sound, and was perhaps not well after all.

Ariel had spent close to five years as an animal care manager at the Wild Bird Fund rehabilitation centre in Manhattan, and so was trained in spotting birds in distress, which is how she could make out that something wasn’t right with the little swan.

Also Read : Kriti Kharbanda Celebrated Her 30th Birthday By Gifting Education To 30 Girls. What A Lovely Way To Celebrate

Otherwise aggressive and slightly dangerous in nature, the mute swan because it was hurt, made no attempt to hurt anyone, rather dragged its limpid body to try and fly off. Ariel who is of the view, “If there’s an animal in need, I’m going to do whatever I can,” decided to tend to the ailing bird, but was unsure what to do. She had her bike there, but not the rescue gear, and the Wild Bird Fund center was already an hour’s drive away.

Taking the swan slowly in her grasps and using her own coat which she had now taken off, to wrap the swan in, Ariel Cordova-Rojas hiked back to her bike that was parked a mile away. And considering she had a 17 pound animal in her hand, we can imagine how it wouldn’t have been easy.

Others at the refuge including a guy named Josh Spector spotted Ariel with a bird in her hand and passed off the incident as humor, for he couldn’t understand why someone would carry a bird in their hand and hike. Meanwhile, Rojas was firm on getting the swan to the hosipital and wasn’t backing down.

Safe at the clinic.

She finally reached her bike and made a call to several refuge centers, however couldn’t get a positive answer from any. Help arrived almost half an hour later, as a coupl offered drive the swan to the subway. With no other option in sight, Ariel was convinced to take the offer, except the couple, Ariel, her bike and the swan could not all fit into the car. That is when the lady offered to call over a friend to extend help in the circumstance.

As they drove to the subway, the couple helped Cordova-Rojas in carrying the bird to a train on the platform and made her board. With the wrapped swan seated next to her in a subway train, Ariel recalled how no one was particularly surprised at the sight in the train.

Till that time, an animal care manager from the Wild Bird Fund met her at the Nostrand Avenue station in Brooklyn. The two then took two more car rides until they arrived at the Wild bird fund, where tests found out the bird wasn’t just underweight but had been suffering from lead poisoning. Currently undergoing treatment, the bird is expected to make a full recover in a few weeks and we are amazed by the kind of humanity and compassion Ariel extended towards a bird, on her birthday no less.

It takes a big heart to forego your initial burthday plans and go so out of the way for a stray bird. But, Ariel says, “That was kind of the perfect culmination of my 20s. It was the perfect birthday present to be in nature and be able to save a life.” And for that, hats off to her!