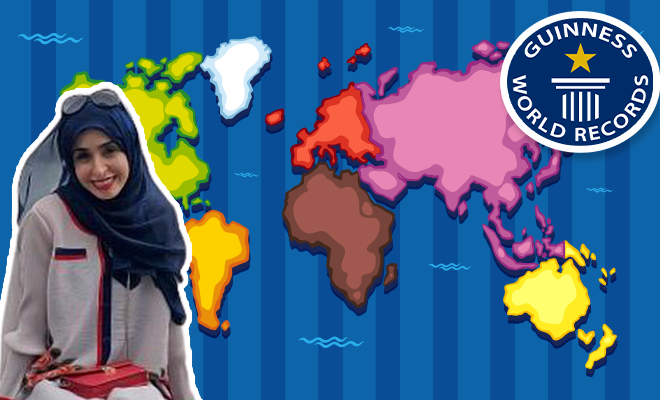 This UAE Woman Bagged A Guinness World Record For Travelling To All Seven Continents In Three Days.

If you ask any millennial, their life’s dream is to travel as much as they can. I am no different. After watching Ranbir Kapoor’s character in Yeh Jawani Hai Deewani travel all around the world, that’s exactly what I wanted to do. But unfortunately, it was pointed to me, and not very nicely, that it’s not so easy. But even today I beg to differ. Travelling around the world might not be easy but it’s definitely not impossible. Look at this woman from the UAE, for instance. She just bagged a Guinness World Record for travelling to all seven continents in three days. Her accomplishment is so cool and I am so not jealous. BRB, crying.

Khawla Al Romaithi, a woman from the United Arab Emirates broke the Guinness World Record when she visited all seven continents in 3 days, 14 hours, 46 minutes and 48 seconds. She completed her crazy world tour in Sydney on Feb. 13. This entire trip was executed only shortly before the COVID restrictions were imposed in all the countries.

Talking about her journey, Khawla said that it was an extremely arduous journey and there were times where she just wanted to give up. However, she wanted to see this world journey through and got a lot of encouragement from her friends and family.

Also Read: Saudi Woman Wins The Title Of Holding A Guinness World Record For The Largest Coffee Painting. And Yet, There Isn’t A Single Picture Of Her

She said, “It was a difficult journey; the attempt demanded a lot of patience, especially in airports, as well as having to deal with constant plane rides.” Further adding, “I wanted to quit on many different occasions if I am being honest, I just wanted to get back home. But I kept looking forward to the end goal. My family and friends deserve a lot of credit for motivating me and encouraging me to keep moving ahead in my journey.”

Three days, seven continents and numerous flights later Guinness announced that Khawla is now the record-holder for the fastest time to travel to all seven continents. She said that her home countries diversity inspired her to travel around the world to get to learn about various cultures and traditions. “The UAE is home to around 200 different nationalities, I wanted to visit their countries and learn about their cultures and traditions,” she said.

Travelling to all seven continents in three days is truly one of the coolest achievements. And even though I am very sad to not be able to travel anywhere, I applaud Khawla for pulling something like this off.

17-Year-Old Maci Currin From Texas Bags The Guinness World Record For Longest Legs. I Didn’t Even Know That Was A Record That Could Be Set