This Man Steals Flip-Flops To Kiss, Cuddle And Have Sex With Them. Shoe Fetish Gone Too Far? 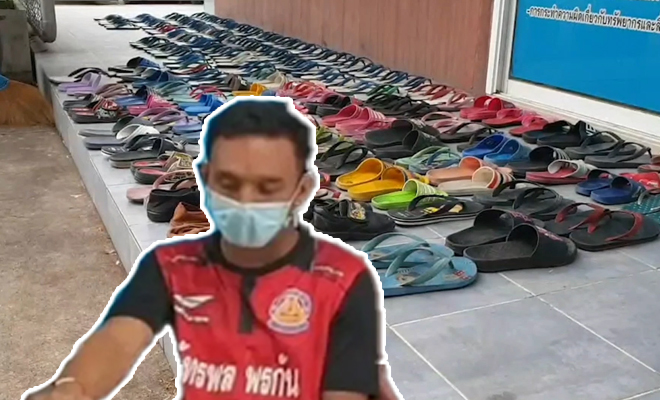 I would like to believe that I am a fairly non-judgemental person. Like I have all my friends and sometimes even people I have just met confiding in me. I genuinely try to think from the other person’s perspective or at least try to respect their choice. But my empathising skills have fallen short for this man here, who is owning up to a different kind of shoe fetish.

This man in Thailand, Theerapat Klaiya has been arrested for stealing his neighbour’s shoes. The authorities identified him from the CCTV footage and went to search his home where they found 126 pairs that he had stolen from people in Nonthaburi. Klaiya is a law-breaker who admitted to night time theft and snatching, as well as violating the coronavirus curfew.

However, one would think Klaiya here loves fashion and is addicted to shoe shopping or rather stealing, they’d be wrong. He doesn’t care about style. This man here has a weird fetish in which flip-flops turn him on. He revealed that he’d wear them for a while, and then rub them on his body while stripping. He said he has kissed and cuddled with them. And apparently, he also had sex with them. I mean, that’s not sex, Klaiya. That’s a slipper, not a stripper. What is wrong with you?

Major Colonel Ekkaphop Prasitwattanachai told the local media, “He fully admitted stealing the sandals for lewd purposes, so will be detained at the station until a court appearance for prosecutors to decide on the next part of the legal process for him.” Klaiya admitted to having been doing this for two years. In fact, he has a collection of flip-flops of different kinds of sizes and colours. And he likes variety.

Seriously? I understand fetishes can be weird by this requires psychological testing bro. What has he been thinking? Like there are people who get turned on with emotions, some with intelligence. This man likes flip-flops and is willing to lead a life of crime for that. So he has 126 flip-flop sex partners. Quite a player, isn’t he? I wonder how he feels when he walks into a footwear store. That must be like the red light area for him. And if he feels like watching porn, he’d just go online and browse for shoes. I want to know what the rest of his life is like.

ALSO READ: This Health Blogger Has Been Drinking Sperm Smoothies Because She Thinks They Boost Immunity. WTF Is Going On?