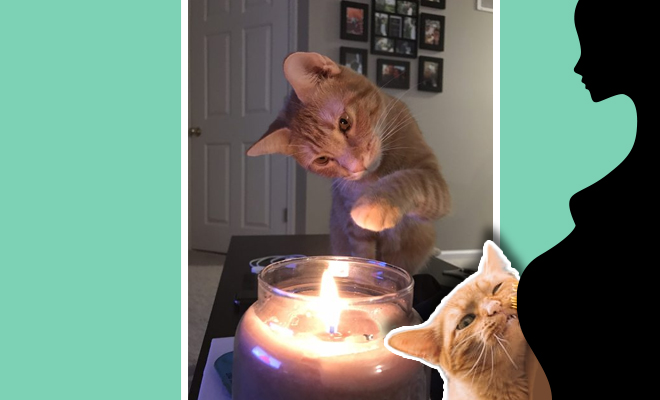 This Man Blamed His Cat For His Wife’s Pregnancy But Not In The Way You Think. The Story Is Hilarious

Cats might not be as lovey-dovey and expressive as dogs are, but they are one of the cutest and smartest creatures out there. The way they purr, cuddle, meow, manoeuvre and settle down in the weirdest of places, it’s all so utterly adorable. Although, have you ever read any cat stories online? These stories describing all the silliness cats get themselves into are hands down, some of the funniest stories ever. From making a complete mess to getting themselves stuck in a jar somehow, cats are as hilarious as they are moody.

However, the story I am about to tell you’ll is the by far the funniest cat story I have ever heard. It revolves around how a pet cat is to be blamed for an accidental pregnancy. Yep, this man explains how his cat is responsible for his second baby and it’s super amusing. Not directly, because that would be weird, but you get it.

He posted an adorable picture of his “evil” cat and narrated the whole ordeal in great detail on a Reddit forum (you gotta love Reddit). The man starts off by explaining that his wife had a very difficult first pregnancy. So, the couple decided that they wouldn’t have their second child for a few years. The wife started taking birth control pills so they would be safe.

But soon enough, the couple realised that the birth control pills made her feel sick and they weren’t letting her lose weight. So, she stopped taking them. He said, “We thought rubbers would be enough, but that’s where our cat comes in…”

The man goes on to explain just how sneaky his cat is. He says, “No door, drawer, or cabinet can stop him, and if he knows where something he wants is he WILL find it.” He continues, “It’s so bad that for weeks after adopting him I thought there was a poltergeist in the house because each morning I’d wake up to find every single cabinet door in the kitchen wide open!”

He goes on to say that he is also partly to blame for this accidental pregnancy (well, I would say he is more than partly at fault if you know what I mean). The thing is, he keeps his condoms in the drawer that his cat loves to get into. The cat loves shreds apart the Q-tips that are kept in that drawer as well.

He recalls what happened saying, “He must have seen the box of Q-tips in the drawer when I put my rubbers away, because not even an hour later I stumbled upon a horrific scene of chewed plastic straws, shredded cotton fluff and shiny gold condom wrappers scattered around the gapping drawer that once contained them.”

He cleaned up the mess as usual. Though later than night, he forgot all about it and as per routine, went into the drawer and pulled out a condom. He said, “We ended up having some sexy time later that night and I vividly remember stumbling into the dark bathroom, opening said drawer, and blindly fumbling around in the box to pull out a condom (as was the routine) thinking nothing of what happened earlier.”

Also Read: A New Study Found That Women Are Less Likely To Date Men Who Put Up Pictures With Cats. Apparently, It’s Considered Less Masculine. What Even?

Cut to a few weeks in the future. The wife began feeling nauseous and sick. Three pregnancy tests later, they found out she was *drumroll please* pregnant. Needless to say, the couple was very confused considering they had no idea how it had happened.

That was until the man realised that the mess his cat made that night, led to his wife being pregnant. Damn, that is not an easy mess to clean up.

Once he had realised what had happened, he ran to the drawer and found his condoms torn and shred apart. He said, “I ran over to the bathroom drawer where I kept the condoms, dumped out the box on the counter and started to inspect each miserable little foil square. Sure enough, several had noticeable scratches, teeth marks, and even full-blown punctures in them.”

He concluded his post saying, “Can’t wait to explain to my new son or daughter one day that they owe their existence to the family cat!”

I have seen a lot of absurd things on the internet, this is one of the most bizarre things. Just imagine telling your child that they were only born because your cat can’t stay away from the Q-tips. Yeah, that is one conversation no parent should have.

I think the title of the story is what caught people’s attention. It surely caught mine. It’s titled, “TIFU By letting the cat get my wife pregnant…”

I can’t stop laughing at this, it’s hilarious.

A Letter To My Cats: A Purrfect Tale Of Unconditional Love, Cuddles And Cattiness