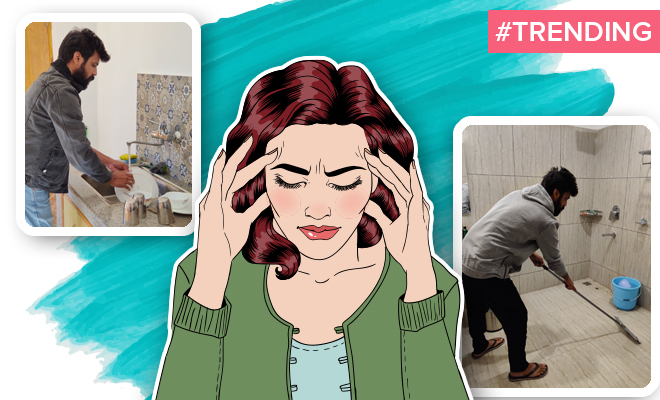 This Guy Shared Pictures Of Him Doing Household Chores To “Smash Patriarchy”. Apparently It Was Sarcastic. Now He’s Unleashed The Misogynists

*Disclaimer – this might resemble to a rant, mainly because it is going to be one*

Now, if there were to be a list made of all the things that would rile me up, or make me roll my eyes to the farthest corners of my eyes, a lot of things from bad manners to bad grammar would make the cut. But what would top the list would in fact be hypocritic dumbasses, who don’t just get concepts of feminism, patriarchy and equality wrong, but also somehow manage to gather enough courage to further promote their questionable understanding of it to the world with aplomb. Pretty sure if you knock, it’s going to be hollow.

We are talking about people who like to live, breathe and rant about issues that fly right past their head but they certainly feel the need to talk about it. The people who would rather spend their time, energy and whatever ounce of brains left into getting something as basic as patriarchy wrong. The people who take to twitter to announce just how much they are contributing to the society merely by existing, and doing something basic but pretending that it’s some sort of favour to womankind. Some of these people are called, Madhur aka @thePlacardGuy who has recently drawn quite some attention to himself, after utterly debatable set of actions.

Indian men be like:
Today's woke stunt – doing dishes, but let me take photos of myself doing it, coz I need to post in social media with #SmashingPatriarchy coz I'm woke af for doing things I believe r done by women primarily. Cheers to my wokeness!

To fill you in, Madhur here has time and again taken to his twitter account to support the cause of “feminism” and “smash patriarchy” by the groundbreaking idea of washing his own utensils, cleaning his own clothes and wait for it – folding his own laundry. Yes ladies, he is the millennial marvel, the perfect gentleman, the prototype of an ideal guy, simply because he has managed to exist and learned to do his own basic chores. Whattey catch.

Also Read : Rhea Chakraborty’s Arrest Causes Bollywood To Rhyme About Patriarchy And Justice. Who Do We Believe?

The guy has posted a collage of photos of himself, doing all this chores, extending a hand towards token feminism, thereby claiming himself to have gotten the concept oh so right. Except, he couldn’t be far from it. You see, upon some thorough background check, we found this was the same guy who during the course of elections, decided to slam actress Swara Bhaskar for masturbating in a movie, by holding a placard with a slogan, “This election, don’t be like Swara Bhaskar. Use your finger wisely, vote wisely!”. And now, when the nation is trending with news of “smash the patriarchy” campaigns, he is back to promote himself and ride the wave by posting such pictures.

And that isn’t all. The guy has then decided to further dig his own grave, and with super confidence mind you, by releasing a two part video where he calls out the ‘double standards’ of various female influencers and feminists who according to him ‘selectively stood up to support Rhea Chakraborty but not Kangana Ranaut as she single handedly fights the Shiv Sena’. Because according to him, one is a feminist only if they believe in every cause that he wants them to, even if it doesn’t relate to patriarchy in any way, in the first place. Alright, then.

It’s also funny he should talk about pseudo feminism and being selectively woke, when he himself has in the past promoted distorted and hypocritical ideology, what with condemning something as basic as masturbation, and then picking up a broom to show how much he cares. So let me get this straight, according to him, men should be given a gold star on the cheek and a pat on the back for doing what they should have been doing themselves years ago, while women must consider these non-gestures as commendable efforts from them and be grateful? Yeah… we don’t see that happening.

But what has happened is a bunch of guys have taken his word as gospel and are now talking about their struggles with feminism.

*Something happens with a Leftist women.

Right winger women has no rights to Justice?

He does try to say he’s being sarcastic but a bunch of people, mainly his followers, don’t know this. So they are happily trilling along and adding their two bits.

But hey, let me break it to you man, you’re not doing the society or the womankind a favour by cleaning up your own shit. It is the most basic thing you can do for yourself, especially a grown ass man like you, and the fact that you think washing utensils paints a picture of equality and progression for women, you couldn’t be more wrong. It is not a woman’s duty to clean up after a man, and just because you haven’t had to do it in the past, doesn’t mean you shouldn’t. Contributing to chores is not a thing a to celebrate, it is a corrective measure for what was done wrong in the past, and it would be great if it weren’t all too hard to understand.

So, drop the act, and wake up to smell the coffee. It would take much more than guys like you taking up household responsibilities to actually “smash the patriarchy”. And that includes understanding what it stands for in the first place.

Also Read : This One Ignorant Man Wants Women To Thank Patriarchy For Our Emancipation. Whatever He’s Having, We Want. It’s Good Stuff