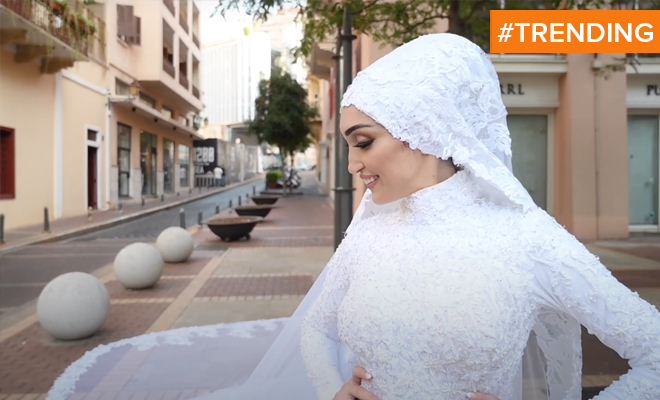 The Video Of This Bride Captured Seconds Before The Beirut Blast Went Viral. She Says They Can’t Live In The City Any More

In the days approaching my wedding, something a girl often spends her life envisioning, I want to be in the most calm, composed and happiest state of my life. Apart from the bride-like fits of panic and over-correction that every bride-to-be goes through, I’d expect things to go as smoothly and seamlessly as ever. From my wedding couture to the arrangements to the functions, everything to be near perfect and all put together to welcome one of the biggest days of my life. As we assume, might have thought a gorgeous bride from Beirut, Dr. Israa Seblani, who was dressed in her wedding gown and shooting for her wedding video, when the capital witnessed a blast on Tuesday.

As Lebanon was covered in dust, smoke and layers of rubble that blew up the moment an enormous explosion devastated the capital, people were left shocked, injured and about 135 killed in the tragedy. Captured in several videos, one of which was supposed to be the wedding video of Dr. Israa, it can be seen that just a few moments ago, she was swaying with happiness on her big day, and not seconds later, a gigantic blast with a deafening noise took over the capital, shattering everything in its way.

The dramatic footage, that is now viral on the social media shows the contrast of before and after, where soon as the blast erupted, everything from the cars to the window panes to even buildings and big structures succumbed to the impact that proved catastrophic for the people of Beirut.

BEIRUT BLAST: A bride posing for a photos in her wedding dress has her session cut short in a terrifying manner – as the shock wave from the explosion that rocked Beirut hits. https://t.co/1RhQeLjsrP pic.twitter.com/c0mOKRc0jN

Also Read : You Can Now Have A Lockdown Wedding With The Statue Of Unity As A Backdrop. Brides-To-Be, You Might Want To Consider This

Talking to Reuters in an interview, Seblani shared, “I have been preparing for my big day for two weeks and I was so happy like all other girls, ‘I am getting married’. My parents are going to be happy seeing me in a white dress, I will be looking like a princess.” She continued, “What happened during the explosion here – there is no word to explain … I was shocked, I was wondering what happened, am I going to die? How am I going to die?” And her shock was all too believable, more so after the kind of videos that surfaced online showing just how brutal the blast was.

Recalling the aftermath of the explosion, her husband Ahmad Subeih, who is 34 and a businessman in Beirut, went on to say, “We started to walk around and it was extremely sad, it was not describable the devastation and the sound of the explosion. We are still in shock … I have never heard anything similar to the sound of this explosion.”

Sharing how he then urged his wife Israa to try and go on to celebrate their big regardless, she said, “My husband told me to continue, we can’t stop. I was like okay, why not, we continue. I was not living the moment actually, I was like walking, my face was smiling, my lips were smiling, that’s it, not more. Then we went to have a dinner.”

Talking about how even though she loves Beirut, living there is not going to be an option for them anymore. There is a lot of damage, many people were killed and wounded. But also if I want to look at us, myself, my husband, the photographer – how we escaped unharmed, I thank God for protecting us. This alone makes me feel optimistic and to keep the joy of the occasion that I came here to celebrate.”

As of now, a state of emergency has been declared in the capital, giving the military full powers during this time of a tragedy. It is also being said that an unspecified number of Beirut port officials have been placed under house arrest pending an investigation into how 2,750 tons of ammonium nitrate came to be stored at the port for years, which is assumed to be the cause for the massive explosion.

Also Read : A Man In MP Married Two Brides In The Same Mandap And They Were Okay With It. Not Judging Them But It’s Kind Of Illegal