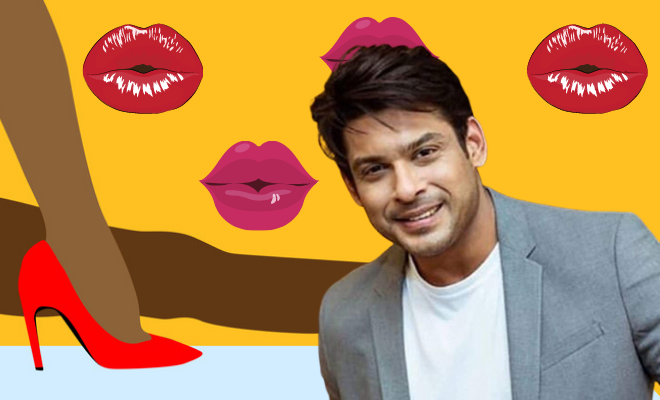 The Next Episode Of Bigg Boss Has Female Contestants Seducing Siddharth Shukla For A Task. Wow, This Is A New Low

Since even before we were hit with the pandemic, people across the world would still find themselves turning into a potato at their couch, mindlessly flipping through channels and soaking in the drama that reality TV brought to our dull lives. Sometimes playing in the background as only noise and other times deeply investing you in the witless conversations, you’d have to admit reality TV has been a tough bullet to dodge. And the fact that shows like Bigg Boss have been going on for strong 14 seasons now is only telling. You see, it’s not that we mind this genre of entertainment or don’t know how to take it in good spirit, but it is when they step over lines and cross over to objectifying women on screen in the name of a ‘task’, that we wonder why we must be subject to shit like this.

If it wasn’t enough for Bollywood to use women as a way to just add glamour, or heat up scenes with provocative dance numbers, that the female contestants of the questionably hit reality TV show – Bigg Boss 14, have also been reduced to mere seduction techniques, something that’s sure to get some TRPs.

As the promos of the upcoming episode of show Bigg Boss hit the small screens, a wave of rage, disappointment and utter disrespect for the show took over the internet, as twitter got flooded with ‘#BoycottBB14’ tweets. The cause for this sudden fury came by after the promos showed some of the female contestants trying to impress former contestant Siddharth Shukla, by dancing around him. Hello, objectification.

Also Read : Trashy Reality Television Can Be Entertaining. But Bigg Boss Can’t Even Get That Right.

#BoyCottBB14
Shame on you @ColorsTV thinking that audience is cheap , playing with emmotions and objectifying women.

#BoycottBB14 having such tasks in a reality show which caters audience of almost all age groups is not acceptable!

Shown dancing to the song ‘Tip tip barsa paani‘ in the rain, trying to woo Siddharth while he sits back on a bike and soaks in the female attention, the task drips deep-rooted misogyny and truly is scraping the bottom of the barrel for content. Tone deaf to the entire existing woke culture and the fact that women are more than just objects left to satisfy men or dance for their pleasure, the backlash received by BB14, was in fact called for.

I'm shook at how others inside are enjoying and hooting in the promo. This goes on fucking national television, do they even realise that! The amount of audience they have, the makers should be a bit aware about the influence the show has.#BoycottBB14

Repeat after me,
VULGARITY is not ENTERTAINMENT !!#BoycottBB14

Not like Bigg Boss anyway had a reputation it has now tarnished, but it surely has managed to turn from trashy content to completely useless and offensive. In a bid to rake up the TRPs, seems like the show makers have compromised on morals and their responsibility towards airing what was earlier known as a ‘family show’. Clearly, they don’t just need to revisit the entire concept of objectification of women, but also how their show that has a fan base of millions, can do so much damage by influencing young minds the wrong way. And this coming at a time when we are dealing with rapes like Hathras.

After the kind of serious backlash several item numbers and movies like Kabir Singh have received in the near past, it seems almost deliberate and insensitive on their part to not have thought through before airing a task on national TV that was more than inappropriate, even by Bigg Boss standards. And that’s saying something.

Also Read : Shehnaaz Gill Lost 12 Kgs In Just 6 Months Because She Was Fat Shamed. While It’s Great, Her Reasons Are Completely Wrong