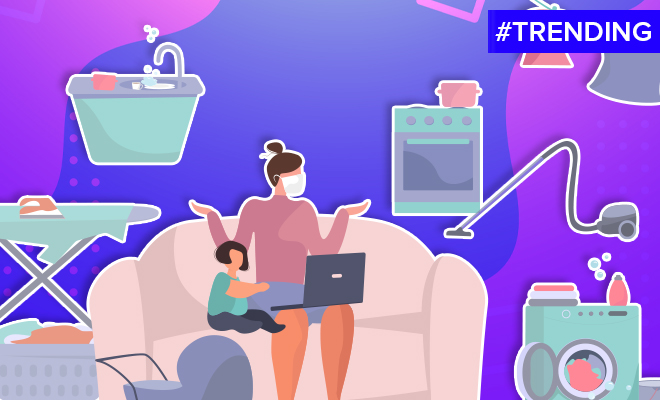 Back in the month of March of this forsaken year, when India found itself in the middle of the spread of a deadly virus that has managed to keep us indoors still, there were a plenty of things that we didn’t anticipate coming our way. Like having to buy our own Netflix account, or forgetting what fitting into our pair of denims felt like or even learning how to hone a million life skills that went beyond just cooking maggi in the kitchen. But even then, one thing that we largely missed out on was just how staunchly this lockdown would act in reinforcing patriarchal gender roles.

You see, as the entire population beat a hasty retreat, suddenly the man and the woman were both confined to the same house, where once only a woman was conventionally supposed to be and take care of the chores. With house help gone, take out deemed risky and work from home responsibilities increased during the pandemic, one would’ve thought that this might be the time when both men and women would take equal share in responsibilities and manage a sound work-life balance. Alas, we were wrong, and how.

As the man continued to proclaim his role as the bread winner and not the bread griller, the working woman faced the harshest brunt of this lockdown, with added responsibilities at home and at work and hardly any cooperation from partners. And while it’s the same with almost every other woman out there who grinds herself between work, kids and chores, the women techies have it no different, as suggested by a research conducted by Hexaware Technologies.

#Covid_19 and the working woman. @Rukmini pens an excellent piece on the reality of the double burden. A striking statistic: #Women spend an avg of 5 hours on house work vis-a-vis men who spend 90 mins. The gap has reduced by an hour during the pandemic. https://t.co/wWRtYnNO0k

Also Read : #Voices: Study Says Women Who Work From Home Suffer From ‘Double Burden Syndrome’ Where Deadlines And Domestic Duties Are Both Their Responsibility

The research was conducted to understand the impact of work from home (WFH) on women, as told by Hexaware CEO R Srikrishna. According to the reports, it was shared that there is a twofold to threefold increase in the workload of women employees. No kidding there. Admitting to this was also Saundarya Rajesh, Founder – President, Avtar Group who said, “With women (especially in India) continuing to be responsible for the majority of the household responsibilities as also that of care-giving, treading the fine line of well-integrated work and life becomes a day-to-day challenge.”

In fact, according to a bunch of women techies who were spoken to for this research, it was concluded that where once it was assumed that WFH might encourage women’s participation, it is doing quite the opposite. Ramya, a Chennai based techie shared with us, “Between taking care of my son and housework, it has been a challenge,” for she talked about how her husband only ever helps her in the evenings as he works for a government job.

Many women are straining under the pressure of #caregiving and #work responsibilities during this pandemic.

Companies should treat this moment as a #community challenge rather than an individual woman’s problem to solve.

She also shared how she faces backlash at work most of the times for not being able to pull the weight of the work, but can’t take some time off either because lay offs in IT during the pandemic have been merciless. Similarly, it has been even more difficult for new mothers, who can’t seem to find any semblance of balance between work and life. And hence, the stress levels for women in the lockdown are touching skies.

While a lot of the companies are trying to find middle ground and make it easier for their women workforce by introducing flexible hours, routine feedback and even trainings to handle pressure better, it is all subject to just how supportive the men at home also choose to be, to equally partake in running a household.