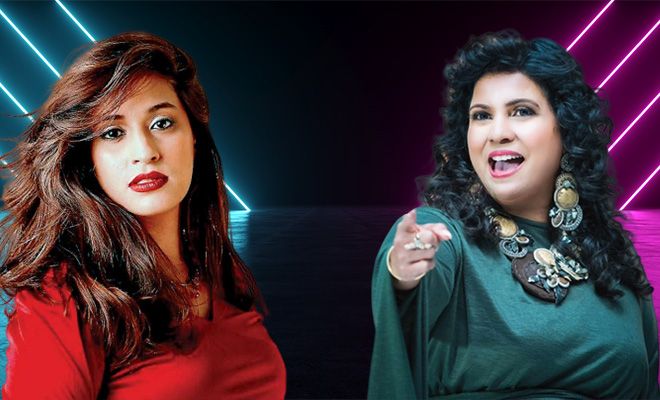 Shweta Pandit Lashes Out Against Hema Sardesai For Supporting Anu Malik. She Did The Right Thing

The worst feeling in the world, the kind that even surpasses being cheated on by your partner or stubbing your toe on the bedside table at night (and that is saying a lot btw) is that of being pulled down in the public eye by another woman. In a time when the concerns around women and their safety need critical attention, the last thing we’d expect is for women to step on other women and take the side of sexual predators while at it. Something we recently witnessed as singer Hema Sardesai came to defense of #MeToo accused Anu Malik with fragile arguments that landed her plum in a pool of public criticism. And the recent one to disregard Hema is singer Shweta Pandit, who too had accused Anu Malik for sexual misconduct.

Also Read : Neha Bhasin Was 21, Shweta Pandit Only 15 When Anu Malik Was Sleazy Around Them. Why Are We Protecting These Men?

Singer Shweta Pandit, who was only 15 years old when Anu Malik misbehaved with her, called him out last year in October, categorically stating the horrific incident that occurred. She was also not the only one, as singer Sona Mohapatra also shared her experience of being sexually assaulted by Anu Malik, when she was only 21 years old. And you’d imagine that the man, who by now is back on the music scene, would be facing the repercussions but no, he’s back. Ever since the allegations were made and his name was outed, not only has he resumed his position as a judge in the show Indian Idol, but also has other spineless singers from the fraternity have rises to give him support. From Sonu Nigam to Hema Sardesai, quite a few have come forward to the defense of Anu Malik, with actions and words that have raised questions about their own mentality and lack of compassion.

This is beyond shameful. Does this statement mean that “a childabuse victim” and a “rape victim” are equally involved in getting themselves abused? seriously? What are you thinking? Disgusted with this statement.. that too from a woman!!! Highly insensitive and ignorant https://t.co/lMCBQYJeIt

And seems like Shweta Pandit is in no mood to sit back and take this. Voicing out her disbelief and anger over Hema’s recent tweet, Shweta fired back at the singer as she wrote on Twitter, “This is beyond shameful. Does this statement mean that “a childabuse victim” and a “rape victim” are equally involved in getting themselves abused? seriously? What are you thinking? Disgusted with this statement.. that too from a woman!!! Highly insensitive and ignorant.” And we would agree with that in full capacity.

Hema Sardesai, who had gone all out in making arguments that weren’t just offensive but also redundant, made some absurd remarks and Shweta’s irate reaction seems justified. And perhaps that is exactly what Shweta Pandit was aiming to rectify as she spoke about how it doesn’t take two to rape but just one very deranged person.

It is about time people understand that sexual assault victims and survivors don’t usually enjoy staying mum to the kind of physical injustice and violation they’ve been subjected to but find themselves too traumatised or perhaps shaken to sometimes do what is necessary. Which is exactly why we stand beside Shweta as she takes down Hema Sardesai for being ignorant and insensitive towards such a rampant issue. She should’ve known better.

Also Read : Singer Hema Sardesai Shows Support For Anu Malik, Says It Takes Two Hands To Clap. What Sort Of Nonsense Is This?