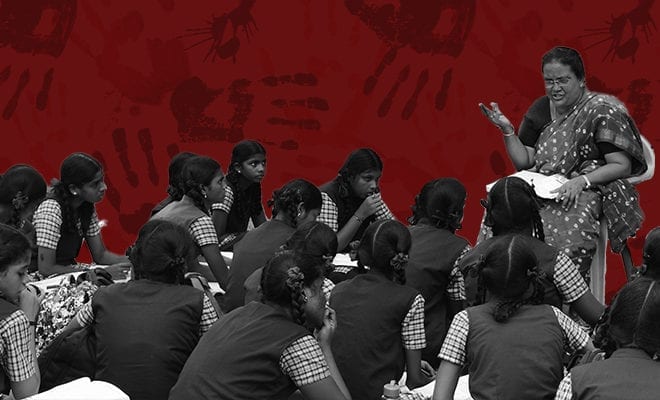 It’s funny that in a world that looks the same for men and women on the outside, is anything but in lived experiences for the two genders. You see, for men, institutions like schools, hospitals or even public transportation are just that. But for women, all of these are but places with potential for violence or assault. A fear that has recently driven Tamil Nadu state government to consider having only female teachers in girls’ schools.

After the furore created by the several and continuous accounts of assault and rape of young school girls by the members of faculty in schools across Tamil Nadu, the state government has decided to do something to bring about a change. The government will now be looking at appointing only female teachers for girls’ schools.

The State Education Minister Anbil Mahesh Poyyamozhi shared the news as he said how a Visaka committee will be established in all the schools across Tamil Nadu for the same purpose, and the appointment of only female teachers for girls’ schools will be considered.

After reports of alleged sexual harassment by male teachers in several schools in Tamil Nadu, the state government is considering having only female teachers in girls’ schools.https://t.co/gqF7ptjGtK

Also Read : This Tamil Nadu Temple Got A ‘Corona Devi’ Idol To Protect People From The Virus. No, We Are Not Kidding

Educationalist Jayaprakash Gandhi spoke on the matter as he issued the importance of maintaining a balance of male to female teachers in government schools and said, “It is no way wrong in appointing female teachers at schools irrespective of govt and private. But the management should be firm that they do not suppress the quality of teachers. They should not appoint someone just because she is a woman. In co-ed schools, balancing the female and male teachers’ ratio will work out.”

Meanwhile, another senior teacher from Tamil Nadu said, “Not having male teachers at schools can not be a solution to the problem of sexual harassment against girl children. Rather, the Govt has to strengthen the laws and legal system to suit the children, motivating sex education in schools, all these can play well against those who try to misconduct with children.” He further added, “Management should firmly make special inspections for online classes’. However, Govt’s strict regulations for online classes will strengthen the secured walls around children.”

While it is to be kept in mind that simply appointing female teachers wouldn’t eliminate the problem, it might just be a start to solving the deep rooted issue of women’s safety.

Also Read : This Man Working In The US Hired People To Murder His Estranged Wife In Tamil Nadu