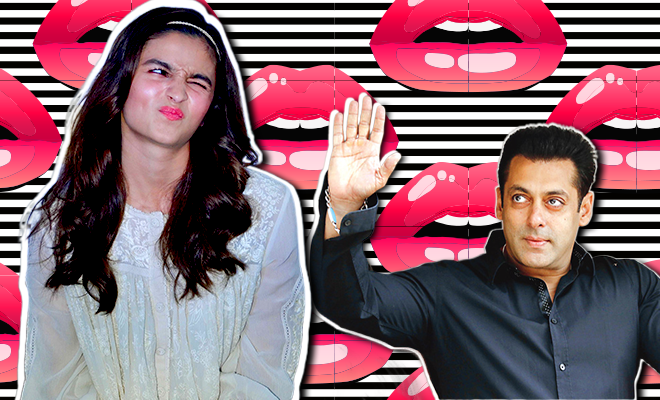 Salman Khan Refused To Kiss Alia Bhatt And Walked Out Of Inshallah. Did Bhansali Just Lose Out On A Potential Blockbuster?

We know that Salman Khan has his own fan following – the kind that have been loyal patrons of his movies since forever. It’s rare for an actor to have a fan base that believe in him, like he is some sort of demi-god. They swear by all his movies and will speak of his humanitarian acts, oh-so-proudly. While I don’t belong to that universe, I believe it’s safe to assume that they were all majorly disappointed when he walked out of Sanjay Leela Bhansali’s Inshallah, alongside Alia Bhatt. If it had worked out, it would have reunited the director-actor duo after two long decades. Their last film together, Hum Dil De Chuke Sanam was a blockbuster, with the signature visual grandeur in all SLB movies and a complex, heart-wrenching plot. Of course, there is Saawariya but Salman Khan’s role in it wasn’t prominent. So, obviously, Salman’s fandom really really wanted to see him in this one.

Neither Salman Khan nor Sanjay Leela Bhansali has revealed the exact reason of the project falling out though. Earlier, there were reports of date clashes and ego hassles but if sources are to be believed the reason is completely different from what was being speculated. According to a report by KoiMoi, Salman Khan walked out of Inshallah because the movie required him to indulge in steamy kisses with Alia Bhatt. And as we are all aware of, Salman has a no on-screen kissing policy. Buzz is that he tried to convince Bhansali to drop the kissing scenes but he didn’t budge. Honestly, if Bhansali had dropped them, it would be a smart move. I mean, Salman Khan movies make crazy money, especially his Eid releases, even without any kissing scenes.

Unfortunately, both the artists seem pretty set about their beliefs and principles, which is possibly why it took them such a long time to work together again. But that fell out as well. However, it seems like Bhansali has found a replacement already. According to a report in Mumbai Mirror, he has been in talks with Hrithik Roshan for the role. There hasn’t been any official announcement yet, so I guess we will just have to wait and watch. Hopefully, this won’t take as long as Bajirao Mastani to finally get made.

ALSO READ: Alia Bhatt Is Excited About Being Paired With Salman Khan. Obviously! She Gets To Enter The 100 Crore Club

On the work front, Salman Khan is gearing up for Bigg Boss 13, which will premiere on September 29. He will also begin working on Prabhudeva’s next, which is a remake of the Korean film, The Veteran. Buzz is that it will be called Radhe and he will be playing a cop in this one too.

Are You Too Sensitive? Here’s How It Could Be Hurting Your Relationship