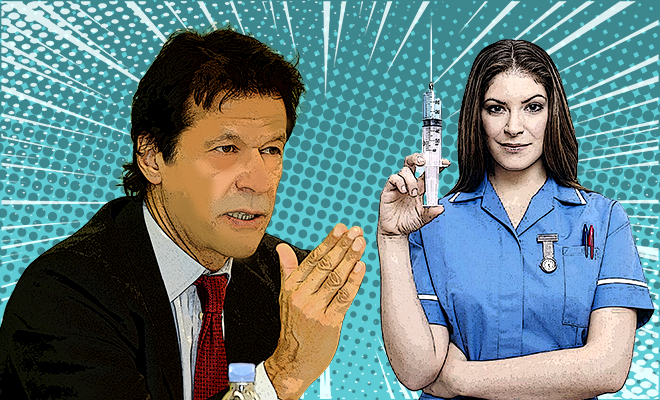 Pakistan PM Calls The Nurses That Attended To Him Angels. Which Has Us Wondering, Why Are Nurses Considered Sexy?

As cringe-worthy a news as it was comical, the Pakistan Prime Minister, Imran Khan was recently massively trolled for his latest interview, where he talks about the after-effects of an injection that he got for not keeping well. Clearly that detail is uncontested here.

As the story goes and as he tells us, Imran Khan said, “Main badi takleef me tha…. Mujhe nahi pata inhone kaunsa teeka mujhe lagaya. Wo teeka aisa lagaya ki meri takleef bhi khatam ho gayi… Duniya badal gayi. Wo jo nurses thi mujhe hooren nazar aane lagi (I was in immense pain… I don’t know what injection he gave me… all my pain was gone.. it felt I had no pain at all… My world changed.. the nurses appeared to be angels to me).” And mind you, this statement wasn’t made when he was still drugged with that injection.

One injection is all it takes for the PM to see nurses as hoors.. pic.twitter.com/syX4hAPxY0

Out of everything else that the Pakistan PM could say, from appreciating the nurses for their hospitality and kind work, to equating them to life savers, all he could come up was that word. Twitter, along with us was naturally not happy with the connotation and trolled the Pakistan PM for his poor choice of words.

Which brings us to the bigger question here, why are nurses supposed to be sexy?

Besides the wanting to be taken care of “need” of men, that has driven them from time immemorial, media has perpetrated this stereotype. Women on TV and in ads and in movies in the profession are often sexualised, making this not only an enduring stereotype but one that means that women in the profession often face sexual harassment at the hands of patients. According to Business Insider, Singapore, “Anywhere between 60% to 87% of nurses experience sexual harassment at work, according to a 2006 review of literature conducted by Pacific Union College professor Tammy McGuire. Similarly, a 2018 poll of 569 nurses found 71% of them had been harassed by a patient.”

It doesn’t help that nurses on screen are often portrayed as sexual beings – they are allowed to be- but in the environment of the hospital. Think shows like Grey’s Anatomy, where nurses and doctors are often engaged in relationships, which may or may not happen in real life, but the sexual tension is palpable.

Overall, we are doing ourselves and men and women engaged in this profession a great disservice by looking at them through the singular lens of sexual gratification. It’s time we let these stupid, insipid stereotypes go.

Also Read : Pakistan PM Imran Khan Blamed Bollywood And Mobile Phone For Sexual Crimes In His Country. What Is He High On?