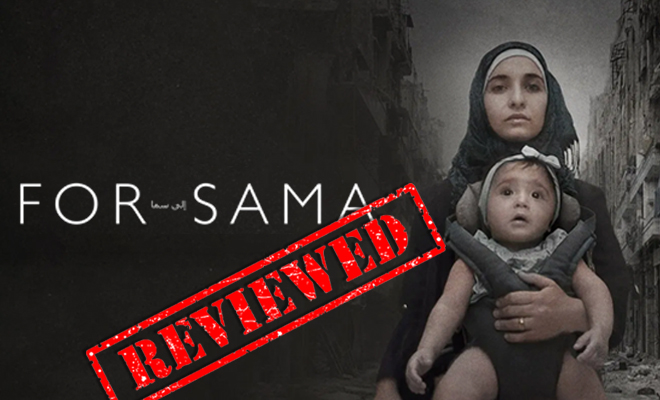 Oscar Winner For Sama Is A Syrian Mother’s Journey Through A War-Ravaged Country. A Movie About War But From A Woman’s Perspective

I’m at an age where most of my friends are starting families. A few of them were/are pregnant during this COVID-19 pandemic, and I couldn’t help but think, “Imagine raising a child during such bleak times!” You don’t have to believe in conspiracy theories; there’s scientific prediction that it’s going to get worse. But over and above nature’s wrath, our world is also threatened by the raging egos of humans, manifesting as acts of war. These man-made catastrophes are also going to be our reality. You’re lucky if it isn’t your reality as yet. But if you want to know what it would be like, Waad Al-Kateab and Edward Watt’s Oscar-nominated documentary, For Sama, the story of a mother raising her daughter during the civil uprising in Syria, is a must-watch.

Who is For Sama about?

The 2011 Arab Spring was a series of uprisings in the Arab countries where protestors pushed against their governments and leaders for years of oppression. In Syria, civil unrest broke out to overthrow President Bashir al-Assad (Ba’athist Syrian Arab Republic party government), which was then attempted to be curbed. Multiple local rebel factions and foreign forces have now become embroiled in this multi-sided civil war, which is barely civil anymore. While countries like Iran, Russia, and the Lebanese Hezbollah support the Syrian Government to push back rebellion, the Syrian rebel groups have been offered military and tactical support by nations like the United States, Turkey, Saudi Arabia, Qatar, Britain, France, Israel, and the Netherlands.

For Sama is 500 hours of footage shot by Syrian journalist Waad Al-Kateab, edited (Chloe Lambourne and Simon McMahon) into an intense 100-minute documentary, with music by Nainita Desai. It chronicles Waad’s life in Aleppo, Syria, during the first five years of the Syrian Civil War, until 2016. It features Waad, her doctor friend turned husband Hamza, their firstborn daughter Sama, as well as their friends and colleagues who kept the resistance alive at a secret hospital in war-torn Aleppo.

Now you’d wonder, so it’s just war-time footage like so many others we’ve seen on news channels? Not really, because For Sama is unlike anything you’ve seen before. This isn’t just a look at how a civil war destroyed a city, it is more a story of what war can do to entire societies and families, to the human spirit.

As we watch Waad begin work, fall in love, start a family, and then find the will to keep fighting for her family during a war, it lends a whole new context to those images and footage of war you’ve been seeing on news channels since nearly a decade now. It makes them more real, more closer to home. Like it could happen to you and your family. Would you survive it?

A mother’s love letter to her daughter

For Sama has a voiceover by Waad as she talks directly to her daughter, Sama, in what looks like a video letter for the little one. Waad films the beginnings of the rebel uprising in her country, thinking that it would be an easy win against their oppressive government. Eventually, she falls in love with her friend Hamza, who is a doctor and committed to helping the cause in any way he can. We get glimpses of their small, intimate wedding that brings them joy, even as a war is raging outside. Even as they set up their marital home, planting a garden that would be covered in ashes and debris, the sense of foreboding cannot stop you from smiling at their resilient hope for a future.

But the situation only gets worse for their country, a pregnancy announcement changes everything for the Al-Kateabs. Their beautiful baby girl Sama is all the more reason for them to keep fighting, as Hamza sets up a hospital hidden from the eyes of the government.

At one point in the documentary, Waad can be heard asking her little daughter, Sama, “What a life I’ve brought you into! Will you ever forgive me? At another point, Waad tells Sama she’s glad for her, because Sama, whose name means sky, is their hope that someday there will be clear blue skies without airstrikes.

As we find ourselves ‘stuck’ at home, complaining how WFH has eroded our work-life balance, we see Waad and Hamza move into Hamza’s place of work. They’re raising Sama in a hospital that has sandbags for protection against airstrikes and explosions, which BTW are as common as the sound of airplanes if you’re living close to the airport.

Is a hospital during war-time a place to raise a child? And yet, that’s exactly what Waad does. While her husband tries to save the life of a baby who has been the victim of an airstrike, Waad films the whole thing, and then goes to hold her daughter, so she can forget the horrors she just witnessed. Their world is cold and bleak, and Sama is their own personal sun. Without her, they’d probably not survive.

Along with them are other people, families trying to raise their kids who are older than Sama and therefore much more aware of what is happening around them. And so, you’ve got visuals of death, despair, and blood juxtaposed with images of life, small joys, and a mother and newborn who survived against all odds. And then of course, there’s Sama’s angelic smile.

Also Read: Gulabo Sitabo Is Helmed By Amitabh Bachchan And Ayushmann Khurrana But Let’s Talk About The Women Who Are Scene-Stealers In This

An intimate, heartbreaking epic about the female experience of a war

Before being turned into a documentary, Waad’s footage was often showcased on Channel 4 in the UK. In an interview with the New York Times, Waad Al-Kateab revealed that the real challenge she and co-director Edward Watts faced was to compile the footage in a way that would make people in other parts of the world give a care about what was happening in Syria. And what better way to show them the impact of war than through the very families it destroys?

But what makes For Sama a hard-hitting watch is the female perspective with which the footage is shot. Waad was determined to not make the story all about her and her family, so we get glimpses of other people and a lot of their city, Aleppo. We see how it must be for a mother to bury her child, because that’s a bigger casualty of war. But we also see little things that leave a bigger impact—a woman who could cook a decent feast for her family can now barely find provisions that are not infested with insects.

It must’ve taken such courage for Waad to have ventured out with her camera and captured the attacks live. But even more courage must’ve been required to raise a child, smile for her, and stand by her husband when they were only inches apart from being blown up by an unexpected airstrike. What went on in Waad’s mind when she was torn about the future? That is the story.

A ray of hope for the future, but also a dire warning

In 2016, after five years of keeping the flame burning, Waad and Hamza were asked by the government to choose between death or exile. With Sama in their arms, they chose to escape, in what made for the most edge-of-the-seat moments of the whole documentary. They were granted asylum in the UK, where they currently live.

And that’s why, at the end of those 100 minutes, I realised that For Sama was a lot about hope. The visuals are surely going to devastate you—injured bodies, parents mourning dead children, children mourning their siblings, blood-streaked hospital floors, and a city reduced to ashes.

But the images that stay with you are the ones where the people are huddled in a tiny room, celebrating that they’re still alive. The way they all come together to help each other. How can they manage to crack jokes about death? How can they hear all those airstrikes and still sing a song? How can they see all that destruction and still not lose hope? And then, little Sama’s smile reminds you, just like it reminded her mother and father, that hope can be such a powerful boost for the human spirit.

But you know what else this documentary is? It is a dire warning that we do not take our freedom for granted and do everything to avert a war, the price of which will be paid by our own children. And I say children, because the war is almost at our doorstep already.

For Sama premiered on March 11, 2019 at the SXSW film festival, where it won the Documentary Feature Competition’s Grand Jury and Audience Awards. It went on to be showcased at a bunch of top international film festivals like the Cannes, and was nominated for the Academy Awards as well as four BAFTAs, making it the most nominated documentary in BAFTA history. It eventually won the Best Documentary BAFTA. I watched the film as part of the Mumbai Film Festival’s (MAMI) theatre at home programme, and I’m glad I did. Experiencing this film at a time of a pandemic, as we teeter on the brink of a possible war for resources and survival, the movie hit me different, hit me hard. As a woman who could some day bring a life into this world, it made me think about the kind of world I wanted for the child, and I could change the world for this child, or raise the child that could change the world.

For Sama portrays beautifully the devastation of war but in such an intimate way that makes us want to hold our loved ones close and hope that we never have to witness it for ourselves. And that feeling right there, if felt collectively, might broker peace.