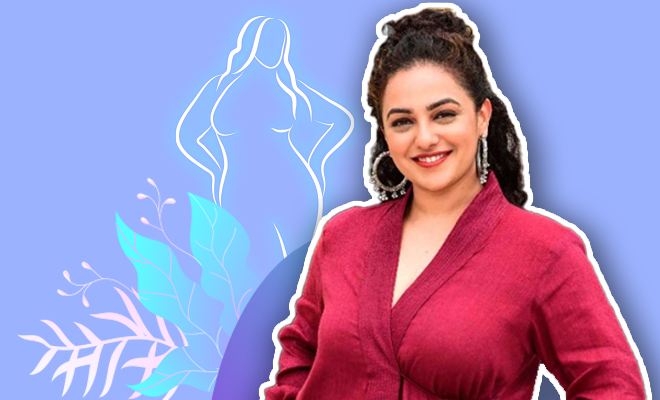 Nithya Menen Speaks About Being Body Shamed And Says Nobody Cares About Health. Why Is Our Definition Of Beauty So Limited?

You may this is my habit of over thinking, but I feel like I have grown up in a world of contrasts. From a very young age, I was taught how nothing and no one is ever perfect. In stark contrast, we spend our lives being pressurised to achieve perfection, in beauty, at work, with studies. No wonder it never matches up. Perfection isn’t real and it has been a tough time learning and unlearning the ways in which the world works. From magazines talking about accepting one’s self, also advertising fairness creams on the next page, to the neighbourhood aunties who might be kilos over or under weight, but never fail to drop a comment or two about your appearance, it is almost as if society sets you up for failure.

And as much as we think otherwise, it is no different with the celebrities either. Often working under a lot of pressure to look a certain way, they are usually the first targets of such unsolicited commentary that deems them not good enough. And the Mission Mangal actress, Nithya Menen is of a similar opinion. The star actress who made her way through the south film industry with hits like Ok Kanmani, to killing it on screen here in Bollywood in the movie Mission Mangal, there’s plenty of talk about her work, sure. But there’s more talk about her weight.

Talking about her experience, Nithya recently spoke up about the issue. She said, “Of course, you get affected for sure. There’s no doubt about it. But what happens is that you realise that you will never get criticised by someone who does more than you; you’ll always get criticised by someone who does lesser than you. So you feel I’m an achiever and I’m working on it. Nobody asks why you’re putting on weight; they just assume. There are so many questions to it. Are they going through some health related issues? There’s so much that they don’t even think about.” And she was right to point it out.

Also Read : Shilpa Shetty Says She Was Insecure Of Sister Shamita Shetty Because Shilpa Was Darker. When Will We Stop Defining Fair As Beautiful?

While stars can often ignore comments on their movies, their social media is a sling fest with comments flying thick and fast about how they look. The comments are often rude and unwarranted, shaming the actor for being themselves. The fact that we let others define what is normal or beautiful is where the problem lies. And that is exactly what furthers and offers support to such concepts of body and fat shaming, not realising how toxic it is to preach only one particular type of beauty standard.

She further added, “Those are small things. I don’t believe in blowing up any personal problem and protesting. You do it yourself, you overcome these things. I have never spoken or given interviews about these things. But I do something about it. The way people look at me in the industry, with or without weight, it doesn’t matter, I’m given my due. That speaks more for me.” And we couldn’t have thought of a better way to deal with it.

Rather than emboldening the ones making such hollow comments sitting behind a veil of anonymity, it is important to trust your gut and give yourself the validation you need. And we are glad, that Nithya Menen is doing the same. It’s about time people are reminded, that beauty does really lie in the eyes of the beholder and not in a particular size.

Nithya Menen is now going to be seen in Amazon Prime’s series Breathe Into The Shadows with Abhishek Bachchan.

Also Read : Shruti Haasan Talks About Periods, PMS, PCOS And Why We Get Sanitary Napkins Wrapped In Black Bags. Period Shaming Is Real