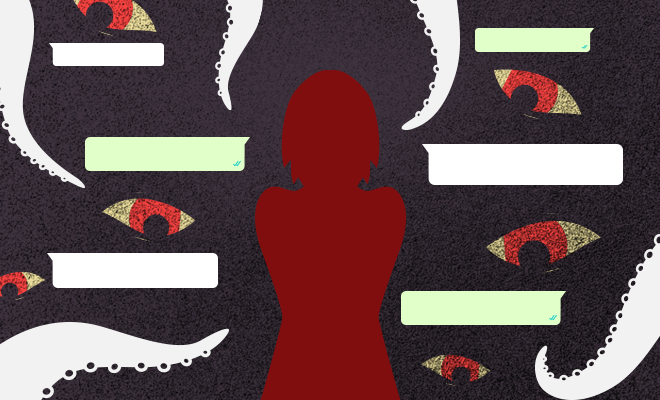 There are a few phases of life that you want to back to and relive. School was that phase of life for me. Though I don’t speak to any of my school friends anymore, we had some of the best days together. Bunking lectures, talking about crushes, learning cuss words and of course failing at math together. I graduated from school almost a decade ago, so things have really changed now, all thanks to social media.

I want to say that the kids have gotten more well-informed and smarter now that they are way more tech-savvy than we were at their age, but I can’t. The thing is, there aren’t many stories I come across that have the ability to really surprise me. But once I read all about this incident, I was shocked.

Before I get into it, I just want to ask you, when you think about school going kids, you think about them being innocent, struggling to get grades and playing football every evening. The very idea that school-going boys can plan a gang rape on WhatsApp is unnerving. If you have kids, this incident will scare you but also perhaps upset you.

Also Read: Nirbhaya, Disha… IPC Section 228A Calls For The Name Of The Victim Of Rape To Not Be Disclosed. Why Is This The Victim’s Shame?

.@writemeenal, @MumbaiMirror: What shocked me was that these chats were of 14 & 15 yr old boys. With younger people leading their lives on Social Media, it’s important they be trained in rules of behavior that would apply while having interactions, in person pic.twitter.com/yfGABgIHmY

A few days ago, a top-ranking IB school in Mumbai had to suspend eight 13 to 14-year-old boys for passing violent, derogatory and highly sexual comments about their female classmates on a WhatsApp group chat. This matter only came to light when the mothers of two of the girls got their hands on that chat after their daughters refused to go to school out of fear.

What gave me a little jolt was that the transcript of that chat which is dated from 8th November to 30th November is over a hundred pages. Due to legal reasons, no one can disclose its full contents. But according to reports, the chat was full of words like “gang bang” and “rape”. There were also a lot of body-shaming and some seriously homophobic slurs used in those chats.

It’s very scary to think that in spite of everything that happened less than a month ago with Priyanka Reddy, and the general climate of being woke in the country, these 13-year-old kids thought it was perfectly okay to joke and pass some very derogatory remarks about gang rape. At some point, you can still understand teenage boys going through puberty talking about sex the normal way. But this is clearly an early sign of some very real issues with those boys that needs immediate professional attention.

Also Read: A Filmmaker Suggest Legalising ‘Rapes Without Violence’ To Avoid Murder After Rape. So That’s The Best Solution You Could Come Up With?

On 23rd November, one of the boys was discussing the girls they would prefer “for one night”. The conversation revolved mostly around two girls from their batch. I can’t even begin to imagine how this must have affected those girls. It’s going to leave a very deep-seated scar for them, which is scary to think about.

In one of the conversations, a boy is talking about a talking one his classmates saying, “Then one night we just go and bang her.” In the same conversation, he uses the term “gang bang” and receives affirming replies from the other boys.

The term “rape” has been used four times in those conversations. With violent context such as “He gets raped by his dad” and “Didn’t rape (girls name)” and slagging off a few classmates with terms like “gay” and “lesbian”. The conversation spiralled into referring to a few girls as “trash”.

When I read all these comments, my heart sank to my knees. I don’t think these kids understand what they were saying and how their “jokes” can lead to larger consequences for all the girls mentioned. The teen years can be difficult to navigate for any one and peer pressure can often get to you – they could have picked up these sexist, homophobic, misogynistic slurs from just about anywhere. For all we know, they could even think “rape” and “fucked” mean the same thing. But it would be concerning that young boys are bandying about these words.

We know that misogyny runs deep in this country and the concept of consent is probably alien to these kids but surely parents and teachers and schools can work together to introduce the concept of gender sensitisation? Schools need to have child therapists on hand and hold seminars for the boys and girls to teach them what social behaviour (even online) is okay and what is not. Parents need to ensure that their son has understood why it is always important to respect a woman and that behaviour like this is unacceptable.

It is clear now that instead of telling our daughters to behave a certain way, we need to teach our sons at a very young age the difference between appropriate and inappropriate.

It’s Been 7 Years Since The Gruesome Nirbhaya Rape Case, But Nothing Much Has Changed.