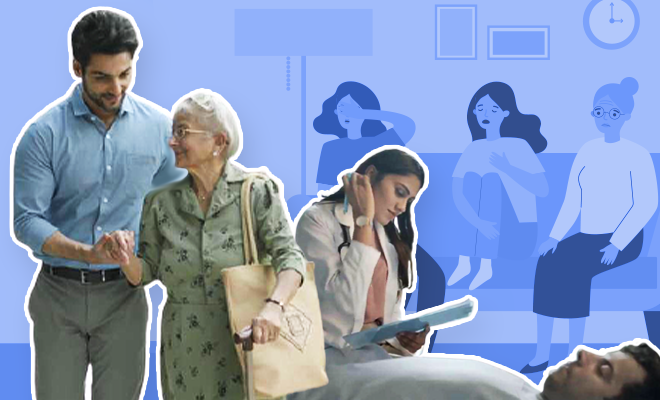 Can We Talk About The New ‘Men Will Be Men’ Ads? Because They’re Actually Sexist AF

For a long time, to sell a man’s product, you needed a sexy woman. It didn’t matter whether she was integral to the storyline, a woman had to be there, even if as a piece of furniture because the frames looked better and somehow if a woman was selling you cars or shaving creams, you bought them. Bottom line, it worked. So we imagine that tropes like ‘men will be men’ weren’t too out of place in these times where women were mere props. But it is 2020 and while I can’t say too much about the country because honestly, one Tanishq ad has us all riled up, I can definitely tell you that Seagrams Imperial Blue ads do not belong to now.

Before you’re wondering I am raging over ads that haven’t been released for a while, have a look at this ad where Karan Wahi makes an appearance and Seagrams continues to peddle to us the bullshit that men simply can’t help themselves in the presence of attractive women. Oh for fucks sake, stop now.

Out Of Sheer Boredom, I Watched Ladies Up On Netflix And It Was Terribly Boring

Watch it so you know why this is so annoying.

I will give it to Seagrams- they had a few ads that I didn’t absolutely abhor. Those were cheeky and funny and I didn’t mind them. But some of them make you want to punch the makers of the ad in the face. In one of their ads, two men are going up an escalator and one of them gets a call from his wife. He picks up the phone, hmms into it a couple of times and then looks down to see that his lace has come undone. He hands the phone to his friend who continues to hmm in to the phone on his friend’s behalf. I didn’t think that was particularly funny. It is exhausting because it tries to tell us that wives don’t give their husbands a chance to speak, or that women just keep talking without bothering to check if the person at the other end if even listening or tuned into the conversation. Maybe if their husbands sounded like they have two fucks to give, women wouldn’t have to rattle off all the things they need him to do, ad nauseam.

The comment section here features plenty of men engaged in back-thumping the ad makers and in the raptures of laughter because this is so funny and what not. Except it’s not.

The entire lineup of ads by Seagram plays on the men can’t help themselves- such poor souls- entirely ruled by their penises and incapable of having a rational thought in the presence of an attractive woman. The bigger problem here is that ‘men will be men’ also is a grow up version of ‘boys will be boys’ which is the common exclaim to excuse stupid behaviour on the part of boys and men everywhere. It is because we excuse real and imagined slights on account of their gender that they grow up to be entitled assholes who can’t take no for an answer.

In the latest ad, Karan Wahi helps an old woman cross the road when he spots an attractive woman and continues to gently push the old woman along to the other side when another woman makes an appearance. The protests from the old woman are weak and the man because, you guessed it, men will be men, is perfectly okay to make an older woman walk quite a bit for a possible romp in the hay. With the attractive females, not the older woman. Or maybe with her. Who am I to judge?

Point being, there is nothing funny about these ads any more. Let’s move on?

An Indian Unemployed Guy Is Looking For An Extremist And Patriotic Bride Who Is Also Fair And Rich. This Guy Is Going To Be Single For A Long Time